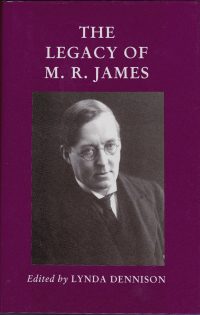 Although this book first appeared fifteen years ago, it makes sense to revisit it in the light of this month’s feature article about M. R. James.

The volume consists of papers given at a symposium in Cambridge in August 1985, held to celebrate the 100th anniversary of James’ first catalogue of medieval manuscripts (1895). Despite the contributors focusing almost entirely on James’ interest in manuscripts, rather than the man himself, there is still much of interest to a variety of readers. Copies are available from the publisher (fig.1).

Janet Backhouse (1938-2004) was the Curator of Illuminated Manuscripts at the British Library until her retirement in 1998. Her essay discusses how public displays of manuscripts in the late nineteenth and early twentieth centuries fuelled interest and fascination in these works of art.

Michael Gullick, is a well-known palaeographer. He surveys a dozen Romanesque manuscripts with English provenances which seem to have been copied from an exemplar at Bec Abbey (Normandy), almost certainly obtained for Canterbury during the archbishopric of Lanfranc (1070-89).  Known as the Collectio Lanfranci, the Bec book is concerned with canon law and comprises two parts: the first containing excerpts from Decretals (Epistolae Decretales: letters of a pope that formulate decisions in ecclesiastical law) and the second, excerpts from Church Councils.

By analysing the decoration and scripts of the different books, Gullick concludes that it was not just Norman scribes who worked in England after the Conquest,  but that, ‘the presence and influence of manuscripts and scribes from places other than Normandy has probably been underestimated’.

Such words obviously resonate with Vidimus readers interested in the influence of French glass painters in England during the twelfth century.

Caroline Hull explores the Douai Psalter (Douai, Bibliothèque Municipale, MS 171), possibly the greatest work of English art to be have been lost in the last century. Made in East Anglia, c.1320-40, it was written and illustrated by the same scribe/workshop as the earlier Gorleston Psalter (BL. Add MS 49622), dated c.1310-1324, and the later Macclesfield Psalter, a lavishly illustrated book rediscovered in 2004 and unknown to the participants in the 1995 symposium. It is now in the Fitzwilliam Museum in Cambridge.

From at least 1820, the Douai Psalter had belonged to the Bibliothèque Municipale in Douai, Belgium. When advancing German troops threatened to overrun the town during the First World War, the Psalter was buried for safety in a zinc box in the forecourt of the library. When it was retrieved after the end of hostilities, it was found to have been almost entirely ruined by damp and acidity. Fortunately, the book had been photographed and discussed before its destruction, and Hull uses a description by James as a springboard to reconstruct the book and to explore for whom it had been made, where and when. One potential patron might have been John, eighth Earl of Warenne (1286-1347), the owner of vast estates in Surrey and Sussex, and commander of the king’s armies in Scotland and Aquitaine. The Gorleston Psalter, for example, displays his arms prominently and has over 120 of its pages populated by rabbits in their warrens, a visual pun on the owner’s name.

According to the Fitzwilliam Museum commentary about the Maccesfield Psalter, the hand of the artist who was responsible for these masterworks, can also be found in several other East Anglian manuscripts. The same author notes that while professional scribes and artists could travel far to work on a prestigious commission, they would normally gravitate towards local focal points of commercial, ecclesiastical and intellectual activities that offered continuous employment on a variety of projects. These could include aristocratic families and their chaplains, the vicars of parish churches and members of monastic houses. The surviving Douai-style manuscripts share iconography, ornamental vocabulary, scribal, stylistic, and liturgical features which suggest a network of closely collaborating individuals, and a continuity of calligraphic and artistic traditions at a major centre that could cater for a most diverse clientele. With its expanding economy, vibrant religious life, and well-documented artistic community, Norwich would have attracted both the talented and the wealthy. The international climate and intellectual vigour of Cambridge would also have had a lot to offer to artists and patrons who appreciated the novelty and sophistication found in the Gorleston, Douai and Macclesfield Psalters.

Art historians have a special interest in the style of these manuscripts as similarities have been noted with stained glass of the period produced in the eastern parts of England.

Christopher Page is now the Professor of Medieval Music and Literature, at Cambridge University and an expert on medieval music, instruments and performance. Drawing upon various references by James to musical notations, his essay edits and discusses Pange lingua, cor letare, a versified account of the composition of the Salve regina, a devotional song honouring the Virgin Mary supposedly written by St Bernard of Clairvaux, a major figure in twelfth century western Christendom and the driving force behind the spread of the Cistercian monastic order.

Although often associated with monastic chanting, the antiphon was also sung at Eton College and in many schools and churches. An inscription survives in the stained glass at the parish church of St Stephen, Norwich, Norfolk, from a window originally depicting, ‘the whole history of the Virgin’s life, with many labels and inscriptions’, including the ‘Salve Regina Mater Misericordiae’. One of the fascinating aspects of this essay is how the song came to be written. According to the poem, St Bernard was granted a vision of Hell in which he saw two young novices defy an older colleague’s entreaty not to swim in a nearby lake but submit themselves to his authority and attend Vespers in church (an evening service). Sadly, they subsequently drowned in the lake – a parallel of sorts with the story of Adam and Eve. According to St Bernard, he then saw the deceased novices saved from demons by the Virgin Mary after singing her praises. When he woke, the saint duly had the words and music committed to parchment so that it could be distributed and copied.

The focus of the essay collection then returns briefly to James himself, with R. W. Pfaff’s surprisingly unflattering portrait of James as a manuscript cataloguer, chiding him for occasional sloppiness and too frequent semi-indifference to liturgical manuscripts; fascinating, honest, yet curiously out-of-tone in a volume supposedly published in James’ honour.

Alan Piper (1946- 2012) was a much admired Tutor in Medieval Palaeography at Durham University. His essay explores the evolution of cataloguing: what information is recorded, how the information is arranged, the typography and design of the catalogue and finally, the index. Presciently, he makes a plea for greater use of, and references to, colour plates. The CVMA Picture Library was one of the first art collections to be available on-line.

The final essay mentioned in this review is by Janet Ringrose. It is a warm account of James’ last great project – the cataloguing of the MSS in Cambridge University Library.  Although never published, the notes are both a tribute to James’ remarkable work rate – he finished the survey in five years rather than the anticipated ten – and also a glimpse into a now-past age which will never be repeated. To save time, the manuscripts were sent from Cambridge to Eton where James could combine cataloguing them with his others responsibilities as Provost of the College and more. Between 1926 and 1930, there were fifty-six two-way journeys in which somewhere between eleven and twelve hundred MSS were parcelled up in batches and sent by messenger, read, collected and returned. Modern librarians would be aghast!