And Then The Heaven Espy: The Windows of Norwich Cathedral by Dr Gudrun Warren with photographs by Mike Dixon. 128 pages, 64 colour illustrations, The Fitzwalter Press, 2017. ISBN: 978-0-9957969 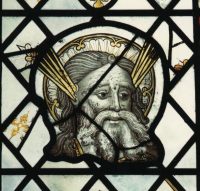 Norwich Cathedral, once the church of Norwich’s great Benedictine Priory, is one of the best-preserved Romanesque cathedrals in Europe, with its exceptionally long aisled nave and eastern axial arrangement of apsidal chapels. It retains many of its 12th-century round-headed window openings, most notably in the nave clerestory and transepts. Major gothic interventions included the building of a semi-glazed cloister and the rebuilding – following the collapse of the spire in 1361/2 – of the upper parts of the presbytery. This campaign resulted in a spectacular array of large traceried eastern clerestory windows. A vast new west window, modelled on that at Westminster Hall, was installed in the 1440s.

Sadly, almost all the cathedral’s medieval glass has disappeared, most probably as the result of 17th-century iconoclasm. In 1644, following Parliament’s enactment of a new law against ‘superstitious pictures’, a committee was established in Norwich to inspect all churches for religious imagery. Led by Sheriff Toftes, this group of men were zealous in their destruction of such material in churches and chapels across the city. The bishop of Norwich recorded the ‘furious sacrilege’ of their work in the cathedral: ‘Lord! What work was here! What clattering of glasses! … What wresting out of iron and brass from the windows and graves!’. He had managed to protect the windows in his own chapel – filled with images of ancient bishops – by persuading Toftes men to remove the heads of the figures ‘since I knew that the bodies could not offend’.

But if the cathedral retains very little of its own medieval glass (a heraldic shield and some other small pieces), it houses a superb collection of Victorian and 20th-century windows, as well some important pre-Reformation panels assembled from Norfolk churches and other collections. Many of the medieval fragments are brought together in the Erpingham Window, named after Sir Thomas Erpingham, who was commemorated in the original glazing and made by G. King & Son of Norwich. The window contains pieces from the cathedral, the bishop’s palace and interesting heads from Hill House, East Dereham, such as that of Moses. [Fig.1] One of the ambulatory windows contains a French figure of St Brice, made in around 1600 and brought to England by the Norwich merchant J. C. Hampp, a significant dealer in European stained glass following the French Revolution. The figure was discovered by Dennis King at Langley Hall, Norfolk. [Fig.2]

Almost all the major 19th-century studios are represented here, some – like Hardman and Clayton & Bell – more than once. Early examples include glass by William Warrington, William Wailes and – in the great west window – George Hedgeland, working with glass supplied by Powell’s. Twentieth-century windows include a history of the Benedictine Order by Moira Forsyth. In the north transept, the six Romanesque window openings are filled with glass designed by John Hayward and Keith New.

This eminently useful book lists and illustrates all 64 of Norwich Cathedral’s stained glass windows. Written by Norwich Cathedral Librarian and Curator Dr Gudrun Warren, it completes work begun by the late John Macdonald, a former cathedral guide. Mike Dixon’s excellent photographs demonstrate the inestimable value, to anyone interested in stained glass, of access to high quality, colour images. It is especially helpful to see general views of almost all the cathedral’s windows. While it is a shame that the CVMA window numbering system is not used, the ground plan and window numbers adopted here are very easy to use.

The text, although brief, provides a good introduction to the content and maker of each windows, with reference to other sources, a usable index and helpful notes on glass-makers. David King’s essay in Norwich Cathedral: Church, City and Diocese, 1096-1996 (eds. Ian Atherton et al) remains the best account of the medieval glass, but Dr Warren’s book is highly recommended to anyone with an interest in Norwich glazing and in the glass of Victorian and 20th-century makers.

The author draws attention to the extensive Victorian and 20th-century practice of commemoration in glass at Norwich. In some ways this is a post-Reformation version of a medieval practice, of course, although the theological context is very different. The range of people and events remembered in the cathedral’s windows encompasses prelates, soldiers, academics, wars, and – fittingly – George and Dennis King, co-founders of one of the UK’s most important glazing firms. Responsible for much of the post-war glazing in Norwich Cathedral, King & Sons also played a significant part in enhancing our appreciation and understanding of medieval window glass.