A Panel from the Black Prince’s Chantry at Canterbury Cathedral Rediscovered?

Following the recent purchase at auction of a mid-fourteenth-century stained glass panel depicting the Coronation of the Virgin, the panel’s new owner, Andrew Rudebeck, and Leonie Seliger, head of the stained glass conservation department at Canterbury Cathedral studios, debate the potential origins of the panel and, in particular, the question of whether it could possibly have formed part of the original glazing of the Black Prince’s Chantry at Canterbury? 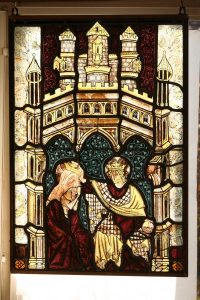 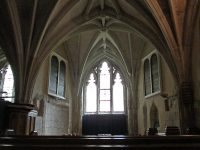 Fig. 2. The chantry chapel of the Black Prince in the crypt of Canterbury Cathedral.

In the early 1360s, Edward, eldest son of Edward III, known to history as the Black Prince, set about re-modeling as a chantry a Romanesque chapel in the crypt of Canterbury Cathedral, as an expression of gratitude to God and to the Pope after being granted permission to marry his cousin, Joan Holland, the so-called ‘fair maid of Kent’. The chantry chapel (fig. 2) now retains none of its original glazing, and there are no records of its medieval scheme. The chantry is, however, known to have been furnished with two altars, dedicated to the Blessed Virgin Mary and to the Trinity.

THE PANEL: History and Conservation

After the panel came to auction in Canterbury in 2016, it was soon put into the hands of Rachel Helleur of Chapel Studios for conservation. Before conservation, the panel measured 22×27 inches; during conservation, this was reduced to 18.25x 26.5 inches, by the removal of its ornamental border and one daylight border, to allow the panel to fit its new location. Also various details in the borders suggested that, although probably contemporary with it, they were not wholly original to the panel. 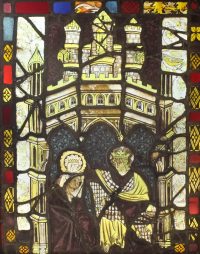 Fig. 3. The Coronation panel before restoration in 2016.

The panel had already undergone other intrusions and modifications. The blue and purple glass in the panel, in the figures’ garments and the backgrounds above and below the architectural canopy, is probably nineteenth-century in date. Even though it is grozed on its edges, as would be expected of medieval glass, the glass surface shows signs of more than one firing: a trait of some nineteenth-century restorers.

When purchased, Mary’s face was also a later intrusion. A more stylistically-sympathetic replacement, together with the lost top right turret, were repainted by Rachel, who also removed leads from breaks that could be edge-bonded and reduced lead size elsewhere.

The small, yellow micro-architectural element (with close parallels to extant medieval garderobes) on the right canopy shaft is a modern (probably nineteenth-century) copy of its twin on the left-hand shaft, but the remainder of the glass in the panel appears to be original. In terms of the panel’s date, Prof. Nigel Morgan of Cambridge University has advised that the original parts date from the 1360s. The subsequent history of the panel prior to its recent sale through Canterbury Auctions is not clear.

AN ORIGIN IN THE BLACK PRINCE’S CHANTRY?: SOME OBSERVATIONS AND OBJECTIONS

1) Is there any direct evidence that the panel originated in Canterbury Cathedral?

Andrew readily admits that the recent origin of the panel in Canterbury is by no means conclusive of its originally belonging to the Cathedral. Canterbury has a record of keeping a firm hold of its medieval panels, with only small amounts of glass known to have been dispersed from the cathedral, to collections in London and New York, for example; but the reappearance of this panel could not be closer to its suggested origin.

Furthermore, although there are no clear references to the panel within the surviving descriptions of Canterbury’s medieval glass, the documented history of the cathedral’s ’s medieval glazing are sparse enough to make it difficult to rule out entirely that the panel may once have resided there. William Gostling’s listing of the glass at the Cathedral published in 1777 covers only the genealogical windows. About 1800, there is reference to the crypt being used for storage, but no details of any glazing. Emily Williams’ inventory of all the glass at the Canterbury lists no Coronation of the Virgin and nothing in the Black Prince’s chantry, but dating to 1897 it comes more than one hundred years after Gostling. There is the possibility, then, that original glass in the crypt might have existed in about 1777 but had been removed before 1897.

The problem here, though, Leonie points out, is that with only one medieval Virgin, and little more medieval imagery of Christ, surviving in the Canterbury glazing, it’s hard to imagine that the survival of an entire panel showing the Coronation of the Virgin wouldn’t have been noted at some point. Some important stained glass panels did indeed leave the cathedral in the nineteenth century, but in the context of the working habits of restorers at Canterbury for much of the late nineteenth and early twentieth century, medieval panels were much more likely to ‘re-appear’, made up from more or less unrelated fragments pieced together.

2) Is the quality of the panel appropriate to the cathedral?

Fig. 4. St Margaret, early fifteenth century, housed in one of the tracery openings of the south window of the south-west transept, Canterbury Cathedral.

More generally, Leonie continues (and at the heart of her doubts about a Canterbury origin for the panel) whilst charming in its design and execution, the Coronation panel is missing a sense of monumentality one associates with a cathedral setting (even in the smaller space of a side chapel or chantry), and it seems to be lacking in confidence and real artistic finesse in its execution. At Canterbury, it’s difficult to think of a piece of authentic medieval stained glass that was made for the cathedral, regardless of century, that isn’t excellent, or at least very good.

For Andrew, however, the quality of his panel appears to be no worse than the remaining fifteenth-century figures in the tracery openings of the south-west transept (fig. 4). And he makes the point that there is very little glass contemporary with the Coronation panel surviving at the Cathedral with which to compare it, for better or worse. But if this panel is thought to be of poor quality and it did come from the Cathedral, perhaps its removal was a consequence of the ambitious standards of the nineteenth century, when significant restoration of the Cathedral’s stained glass was undertaken and a west tower was rebuilt to make the façade symmetrical.

3) Does the condition of the panel suggest the hand of Canterbury restorers?

The replacement of the Virgin Mary’s face with a later in-fill prior to the panel’s most recent restoration at Chapel Studios has already been noted. This, Andrew points out, has parallels with restoration practices at the Canterbury. Even its renowned genealogical windows feature numerous replacement heads. Equally, he understands that some nineteenth-century restorations of stained glass at Canterbury are also known to have featured multi-fired glass, as found in the Coronation panel.

To Leonie, however, the repairs on the panel are not resonant with the work of Austin and Caldwell, the family to whom the conservation and restoration of the Canterbury glazing was entrusted for four generations from 1819 onwards. Caldwell would almost certainly have incorporated authentic medieval glass as stop gaps, or made modern additions look more ancient by faking corrosion damage. Austin did not, to Leonie’s knowledge, re-fire medieval glass.

4) Why the Black Prince’s chantry at Canterbury Cathedral?

Stained glass in the Middle Ages is known to have reflected in its subject matter the dedication of nearby altars. A Coronation of the Virgin is appropriate, then, for a medieval altar to the Blessed Virgin Mary. Andrew notes that the cathedral at Canterbury is known to have had three altars to the Virgin. One was housed in the Lady Chapel in the north nave aisle until 1455, when it was moved to the North West transept chapel. It is unlikely that this panel of c.1360 would have been saved or used as part of the furnishing of a new Lady Chapel in 1455. A second altar would have been located in the windowless chapel of Mary in the undercroft. This leaves, he argues, the altar to Mary in the Black Prince’s chantry, which fits the date of the glass.

For Leonie, again the question is one of quality. Everything associated with the Black Prince, be it the architecture and carving in the chantry chapel, the metalwork and enameling of the effigy, the achievements, or indeed the painting of the underside of the tester, is of superb quality and refined aesthetic. The Coronation panel is simply not in that league.

5) Would the panel have fit the windows of the Black Prince’s chantry chapel?

The lights of the two east windows of the chapel currently measure 17 inches wide, mullion to mullion, significantly narrower than the panel as it now stands. However, Andrew suggests, the mullions of neither window appear to be original. One was replaced in 2015, and the other appears to be largely nineteenth-century. Perhaps significantly, the two east windows of the chantry chapel are flat windows: they cut a chord out of the apsidal structure above, possibly causing structural instability. If so, the mullions may (although no record of this has as yet been found) have been widened, perhaps during nineteenth-century restorations, to address the possible weakness, thereby reducing the window width [1].

Although not contributing to the argument that the panel may have originated in Canterbury Cathedral, there is one iconographical detail in the panel both Andrew and Leonie feel particularly worthy of note. The left and right towers on the upper portion of the canopy both feature small, yellow architectural elements that have much in common with the form of surviving medieval water closets or garderobes (fig. 5). Although not a common feature of medieval stained glass (indeed, are there are other examples known?), perhaps they suggest an innovative take by the designer of the panel on the subversive or humorous subjects often found in the margins of medieval art. Or perhaps, they suggest, they simply indicate the high levels of cleanliness thought to prevail in the Heavenly Jerusalem! 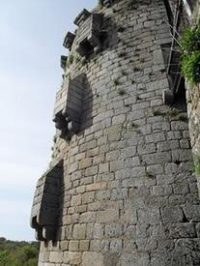 Although admittedly speculative and not without its problems, for Andrew, his image of the Coronation of the Virgin suggests through its subject matter, date, appearance and condition, in the context of the gaps inherent in the history of Canterbury’s medieval glazing, that it is worth hypothesizing that the panel may have originally come from the Black Prince’s chantry at Canterbury. For Leonie, ultimately the stumbling blocks are the question of the panel’s quality – essentially ‘rustic’ more than monumental in tone – and the style of the restorations, which bear no similarities to those carried out by the Canterbury restorers Austin and Caldwell in the nineteenth and twentieth centuries. Finally, she point out that nothing else of this style can be found in the many windows of the cathedral that contain fragments of lost windows.

Readers of Vidimus, your thoughts and comments on this panel, and on the suggestion that it may once have been installed in the windows of the chantry of the Black Prince at Canterbury, are very welcome!

[1] It would be interesting to have the views of Heather Newton (Cathedral Conservator and past Head of Stonemasonry and Conservation) as well as of the Canterbury Archaeological Trust on whether this would be a possibility.