The collection of medieval window glass had been in the possession of Hugh’s late father (Ian) who, although a barrister, had participated in numerous excavations in the middle of the 20th century. Hugh found a substantial collection of medieval pottery and decorated window glass in his late father’s house. It was fairly easy to trace where and when the pot-tery had been excavated, and to identify the relevant county museum which welcomed its deposition. Sadly, the window glass collection had no obvious provenance and the county museum understandably declined to accept it. After various enquiries the collection was offered to Historic England (where I worked until earlier this year).

The glass (over 1000 fragments) is generally in rather poor condition (Figures 1 and 2). Some examples have corroded so much that they are now opaque and the decoration all but invisible (in some cases a layer of mortar appears to have been applied to the decorated surface of the glass). 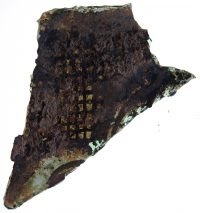 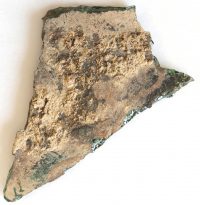 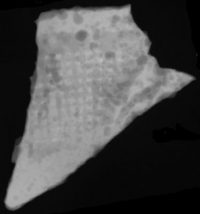 While with Historic England, I had helped purchase a replacement x-ray fluorescence (XRF) spectrometer for the laboratory in Portsmouth. The XRF that Historic England bought (a Bruker Tornado) allows analysis of very small areas (0.02mm, µXRF) and also has a moveable stage which can be used to provide a scan across the whole surface showing the distribution of different elements. Scanning µXRF has many applications but soon proved to be a particularly useful way of improving the legibility of excavated painted medieval glass (Figures 3–7). 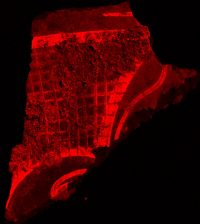 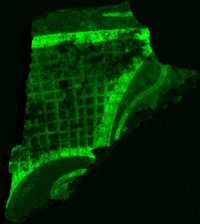 µXRF scans of elements in the glass (such as silicon, potassium or calcium) showed fairly uniform distributions; however, scans for elements in the paint used to decorate the glass (in this case lead and iron) provided excellent images of the decoration. 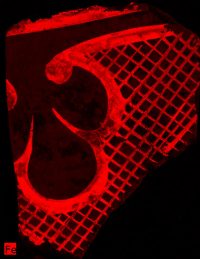 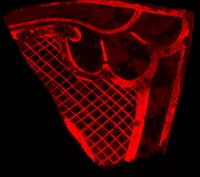 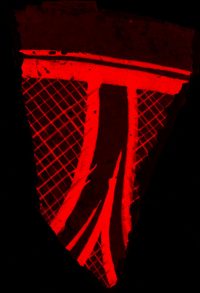 µXRF scanning of over 200 fragments from the Threlfall Collection has shown that most of the painted designs are closely related. Most were part of the same decorative scheme and so were probably made at the same time and came from the same building (and possibly even the same window). This glass is painted (grisaille) to produce simple shapes based on leaves or curvilinear geometric shapes. Some fields are left plain while others, in contrast, are painted with much thinner lines to produce cross-hatching (Figures 8–11).

A common border comprises a wavy line and dots (Figures 12 – 15) but this is clearly related to the cross-hatching as at least one fragment of glass has elements of both (Figure 16). 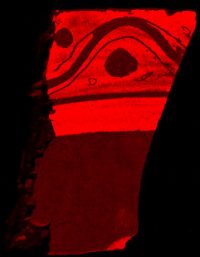 Several fragments of this glass also bear simple representations of leaves or fruit (Figures 16–19). The preponderance of a limited suite of design elements (often referred to as stiff-leaf grisaille) helps to identify the period when this glass was originally made — the 13th century (Day 1902). Numerous parallels can be found among glass from York Minster (O’Connor and Haselock 1977), Worcester Cathedral (Foster 1998), Salisbury Cathedral (Marks 1996) and Battle Abbey (Kerr 1985). 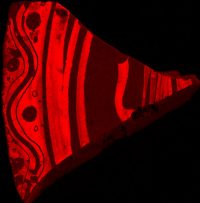 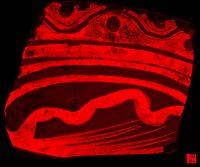 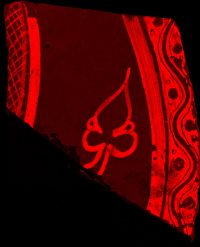 A few fragments of glass are decorated with letters (Figures 20–22), mostly in a font usually described as Lombardic which was commonly used in decorated glass (and manuscripts) until the later 13th century. Careful examination of the lettering suggests that these were produced by at least two different glass painters. While TG#0010, for example, is well executed (Figure 20), TG#0019 (Figure 21) is more roughly worked, and clearly shows how the letter was produced by scraping away paint (incompletely in this case). Fragment TG#0020 contains the letters REX, possibly suggesting that the original glazing scheme included or made reference to a king (Figure 22). 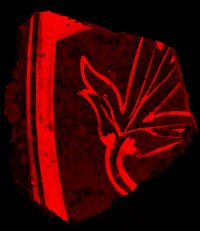 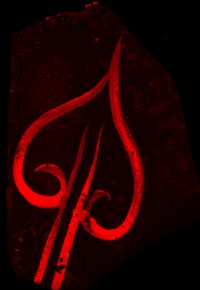 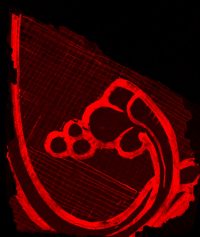 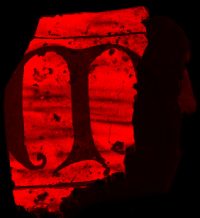 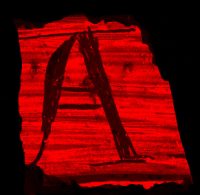 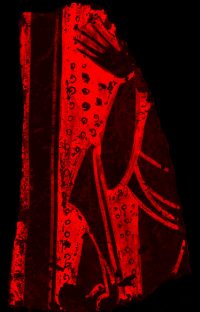 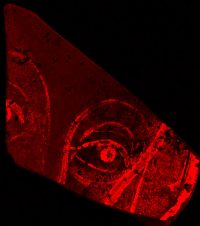 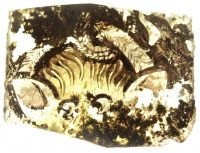 Figure 26. A devil from the Torments of Hell? Note the yellow was achieved using silver staining which suggests to that it this fragment was manufactured after the beginning of the 14th century (TG#0001)

Figurative representations are rare but include part of a seated figure (Figure 23) whose right hand is extended with all four fingers straight (ie not a gesture of benediction) suggesting a secular figure (possibly a king). One fragment (Figure 24) comprises part of a face and another (Figure 25) shows the battlements of a castle from a canopy. A final example (Figure 26) shows the face of a devil (probably from a scene depicting some of the torments of hell in one form or another). This example is well preserved (the µXRF scans added little to the clarity of the image) and it was probably made somewhat later than the bulk of the grisaille glass from this site. This fragment of glass played an important role in confirming when and where the glass had been excavated.

Tracing the origin of the glass

The glass had been in the collection of Ian Threlfall who had participated in several excava-tions of medieval sites in the middle of the 20th century (eg Jope and Threlfall 1958; 1959) but none of the published accounts of excavations matched the details of this particular col-lection of glass. A thorough search through Historic England Archives revealed that in 1938 and 1939 Ian Threlfall was the director of archaeological excavations by the Birmingham Archaeological Society at the Benedictine monastery at Alcester Abbey. The abbey was founded in the late 1130s but went into decline in the 14th century; it became a cell of Evesham Abbey in 1465 and was dissolved in 1540 (Styles 1941). Sadly most of the records and artefacts recovered during the excavation were lost during the wartime Blitz, and so no attempt had been made to publish the results of the excavation. The Birmingham and Warwickshire Archaeological Society does hold a small archive relating to its excavations at Alcester Abbey and this includes notes taken of a lecture given in 1939 (the lecture was written by Threlfall but as he was by then serving in India it was delivered by someone else). The lecture notes report that a ‘fourteenth-century window of stained glass from the Chapter House was probably destroyed for the sake of the lead’ (presumably at the time of the monastery’s dissolution). The glass included ‘rich ruby, deep blue, amber and deep green’ colours, but of particular interest was the note that some of the glass ‘was painted with leaf and scroll designs and one fragment had an amusing devil’s head on it’. It seems certain, therefore that the Threlfall collection was excavated at Alcester Abbey just before the beginning of the Second World War.

µXRF scanning has proved to be highly successful in improving the imaging and legibility of painted medieval glass. In the case of the glass from Alcester Abbey, this has, for many fragments, been essential as much of the glass now suffers surface corrosion (and in some cases a layer of mortar). If the glass was freshly excavated then it might be possible to remove some or all of the corrosion and/or mortar); however, the Alcester Abbey glass is now too friable to be treated in this way. The only practical way to view obscured decoration is through the use of x-rays. Conventional x-radiography has been attempted but did not prove to be particularly useful: the painted layer does indeed contain lead and iron and so would absorb more x-rays than unpainted portions, but the thinness of the painted layers means that there is little contrast between the painted and unpainted areas. The use of scanning µXRF, in contrast, is, in most cases, highly successful in distinguishing painted decoration. It is interesting to compare the images based on two different elements: iron (Figure 6) and lead (Figure 7). The iron scan provides excellent contrast and brightness for the decorated glass in most areas but where the overlying corrosion/mortar is too thick the painted decoration is obscured. The scan using lead shows that this is less affected by surface corrosion/mortar as the characteristic lead x-rays (10.5kV) are more energetic than those for iron (6.4kV). Nevertheless it would appear that corrosion layers thicker than 3mm will completely obscure decoration (whether viewed using characteristic iron or lead x-rays). Several of the scans show individual brush strokes in precise detail, such as the way the cross-hatching sometimes passes over the limits set out for it (Figures 10, 16 and 19). Some painterly effects were also achieved by scrapping away some paint (before it was fired) and µXRF shows that this was with varying degrees of thoroughness.