For fifteen years as Stained Glass Adviser to the Diocese of Truro, Michael Swift has had oversight of over two thousand existing windows in the parish churches of Cornwall, as well as a consultative role in the commissioning of new ones and the windows of Truro cathedral. His work has included the compilation of a comprehensive window catalogue for the Diocese (‘TRUROSEE’), as well as (in collaboration with Dr Joanna Mattingly) a Gazetteer of medieval windows (published in issue 31 of Vidimus). His research was utilised by Peter Beacham for the latest edition of Pevsner’s ‘Buildings of England – Cornwall’. In 2014, he established a website dedicated to the stained glass of Cornwall (www.cornishstainedglass.org.uk).

For a number of years, Michael also devoted himself to researching the history of the largest stained glass scheme in Cornwall – that of Truro Cathedral itself. The overall coherence and artistic unity of this scheme, designed and manufactured by a single firm, revealed a fascinating story involving a number of major personalities, reaching way beyond mere technical and descriptive detail. The final text of “The Windows of Truro Cathedral – a Victorian Vision Fulfilled” was completed in 2015.

It soon became apparent that publication online, rather than in print, would be the most appropriate medium for this work, not least because of the need to reproduce the large number of high-quality images. Dr Mark Charter, who set up the initial website, devised a means of displaying the major windows (including the three rose windows) section by section, enabling minute details to be revealed which are not easily visible in situ even with binoculars. It is envisaged that visitors may soon be able to access this detail (on smartphone or tablet) while actually touring the Cathedral- a groundbreaking step in interpretation and an aid to further scholarship.

The website has now been expanded to include the TRUROSEE catalogue and the Medieval Gazetteer, as well as Michael Swift’s previously published papers on a number of individual Cornish churches. More recently, Michael has been researching the significant and hitherto overlooked contribution of the Plymouth firm of Fouracre to the stained glass of Cornwall’s parish churches and other public buildings. A total of over two hundred windows identified so far, and this work will be added to the website shortly.

As well as individual studies, the website also includes sections on topics such as war memorials and the cultural and social context of stained glass; venturing beyond windows, it details the Pinwill woodcarvings in Truro Cathedral and Crantock church. In addition to Anglican parish churches, it is anticipated that other denominations will also ultimately be included (the database for these is now being completed), as well as secular buildings in Cornwall such as municipal buildings and Masonic halls, research on which is currently in progress. Exciting discoveries are being made all the time – and it is hoped that the existence of the website may encourage custodians of hitherto uncatalogued or even ‘lost’ windows in Cornwall to come forward. Michael Swift and his small team anticipate being kept busy for some time!

Inevitably, among all the thousands of windows Michael has studied, he has his own personal ‘Top Ten’. These are, in chronological order: 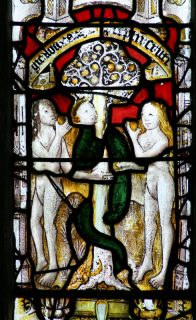 Fig. 1. Adam eats the Forbidden Fruit, from the Creation window at St Neot’s. 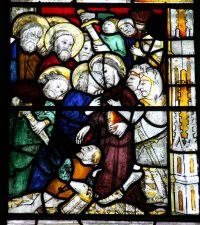 Fig. 2. The Betrayal of Christ by Judas Iscariot, from the Passion window. 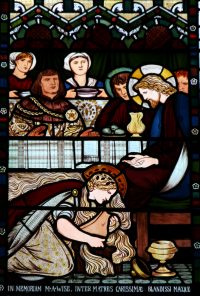 Fig. 3. Mary Magdalene washing the feet of Christ, from the east window of St Ladoca, Ladock.

For description and discussion, see Michael’s article on the Ladock glass. 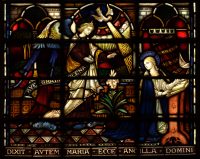 Fig. 4. The Annunciation to the Blessed Virgin Mary, from the east window of Truro Cathedral.

For description and discussion, see Chapter 6: The East Windows of ‘The Windows of Truro Cathedral’

Fig. 5. Christ, from the east window of St Germans.

For description and discussion, see Michael’s article on the Morris Windows of St Germans. 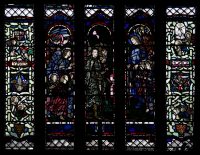 For description and discussion, see Michael’s article on the Bolitho memorial window at Paul Parish Church. 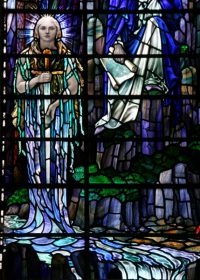 Fig. 7. The Lady of the Lake from Whall’s Arthurian windows at Tintagel. 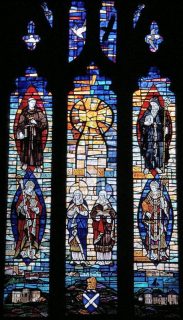 Fig. 8. Cornish Saints and Icons from the east window of Lelant parish church. 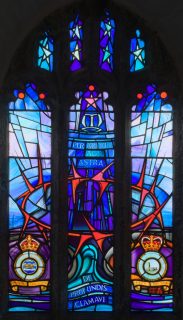 Fig. 10. Abstract design, including the Dove of Peace, from Flushing Church.