Renewed excavation at Montfort Castle, a Crusader fortress in modern northern Galilee, dating to the thirteenth century, has discovered a previously unknown, massive Gothic hall in which survives the remains of medieval grisaille-painted stained glass. These recent findings follow on from work in 2017 that first demonstrated the comparatively luxurious and wealthy lifestyle enjoyed by the German crusaders who constructed the isolated castle on the edges of the Christian world.

Monfort was built on land purchased by the Teutonic Order in the 1220s, with construction beginning towards the end of the same decade, and became the Order’s principal castle in the Holy Land. Excavation has taken place at the castle since 2011, and previously revealed a three-storey structure, comprising cellars at its lowest level, a Great Hall in the middle, and, at its highest level, highly-decorated, luxurious domestic apartments, thought possibly to have served as the residence of the Grand Master, Supreme Commander of the Teutonic Order. These also contained stained glass remains. 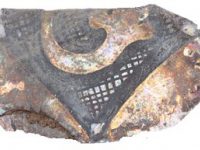 During further, recent, work in the same area, the outline of a barrel vault extending away from the previously-discovered structure. “We knew there was a structure extending out here but did not suspect it was a major building,” explained Prof. Adrian Adrian Boas, president of the Society for the Study of the Crusaders and the Latin East, who led the work incorporating vaulted rooms, gilded wood, richly painted walls and stained glass. “But when we excavated beyond it, we found in the debris evidence of a two-storey building with Gothic architecture and grisaille-decorated stained glass, obviously highly beautiful and decorated.” (Fig. 1)

The newly-discovered Gothic Hall predates the castle’s Great Hall, which is similar in architectural plan, but around half its size. It has been suggested that the Gothic Hall may have served as the original ceremonial hall, but as the order grew in wealth, a grander Great Hall was constructed.

This discovery emphasises the order’s material wealth, and the splendour of Monfort, which, in its upper levels in particular, is noteworthy amongst Crusader castles in the Holy Land. The castle was, however, ultimately short-lived. Increasingly an island in Muslim territory, the castle fell on 23rd June, 1271 after a siege of just 15 days. By July 4th, it lay destroyed and abandoned; never reoccupied but, now, at least in part, redis-covered.

Metropolitan Museum of Art, New York: “Relative Values: The Cost of Art in the Northern Renaissance” 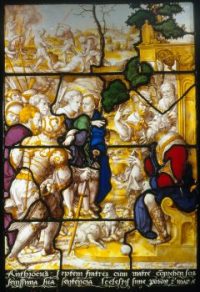 Fig. 1. “Martyrdom of the Seven Maccabee Brothers and their Mother”, c.1530-45, de-signed and executed by Dirck Vellert (The Metropolitan Museum of Art)

Stained glass designed and executed by Dirck Vellert (fig. 1) features in a new exhibition at the Met, running until June 23rd, 2019, that aims to transform perceptions of Northern Renaissance art. The collection of 63 carefully-selected works dating from the sixteenth century illustrate that art was appreciated, accessed and obtained across the entire social spectrum during this period, from high-born to low, in both civil and religious spheres. Spanning exquisitely expensive tapestries and gold ware, through to simple salt-glazed stoneware, the items are presented on stark metal screens and in simple plexiglass boxes, like those used in modern cold-storage facilities. The aim: rather than transporting the viewer back in time to a distant (alien) past, the objects are brought forward to the present day.

To help illustrate the original market value of the art, Elizabeth Cleland, the exhibition’s associate curator, calculated the cost of each piece in terms of a European-wide stable metric of the time: one milking cow. Next to each work, a note is made of how many milking cows it was worth. Vellert’s panel, at 12 cows, finds a place around the centre of the cost spectrum, between, at one end, a fine tapestry of St Veronica, for example, valued at 52 cows, and a light-hearted, German Bottoms-Up stoneware cup, available for the bargain price of the equivalent of 1/8 of a cow!

For more information about the exhibition, and the thoughts behind its presentation, see the Mets Curator Conversation: Seeing the Northern Renaissance through Contemporary Eyes: https://www.metmuseum.org/blogs/now-at-the-met/2017/relative-values-elizabeth-cleland-curator-conversation.

Research by the church tourism website, explorechurches.org, has named Suffolk as the country’s best county for discovering stained glass. Analysis of 2,000 churches by The National Churches Trust, which runs the website, found that 72% of the county’s churches are home to stained glass by famous designers (or of particularly high quality or craftsmanship), and that collectively, the county boasts an enormous variety of stained glass windows, from medieval, through the Victorian and Pre-Raphelite periods, to more modern times.

Of all the stunning examples that helped Suffolk claim its title, perhaps the most spectacular, and familiar to readers of Vidimus, is that found at the church of the Holy Trinity at Long Melford (fig. 1), particularly associated with the wealthy local wool merchant, John Clopton, set up in the late fifteenth century in commemoration of his family.

Cornwall, home to glass such as the spectacular late medieval windows at St Neot’s, and Cumbria, which counts the exquisite set of windows by Edward Burne-Jones at St Martin’s, Brampton among its treasures, joined Suffolk in the top three county spots in the survey.

Deadline approaching: Collaborative Doctoral Award Competition 2019, A Window onto the Medieval World: Illuminating the Role of the English Glass Industry in Glazing between AD 1100-1600.

Applications are invited for an AHRC fully-funded Ph.D studentship based in the Department of Archaeology at University of Sheffield (alongside Caroline Jackson), working closely with the Stained Glass Studies Research School at the University of York (alongside Sarah Brown), and including a specific laboratory placement with Historic England at Fort Cumberland in Portsmouth (alongside Sarah Paynter).

This interdisciplinary project combines stylistic and chemical analysis of medieval glass, with documentary evidence, to understand the market for English and imported Continental glass during the 12th-16th centuries. The study will focus on unpublished assemblages of window glass from nationally significant sites in England held by Historic England.

The PhD student will be enrolled at, and will receive their PhD from, the University of Sheffield, but will be expected to spend time both in York and Portsmouth, as well as becoming part of a wider cohort of AHRC White Rose College of the Arts and Humanities (WRoCAH) students.

This full-time studentship is fully-funded by the AHRC for 3 years and will begin in September 2019. The studentship will cover tuition fees and will also provide a maintenance award. In addition, Historic England will provide research expenses of up to £1000 each year (up to 4 years) to cover costs associated with undertaking the research. Applicants should have a strong academic record, including a Distinction (or equivalent) at Masters level in a relevant discipline (which may include but is not exclusive to Archaeology, Archaeological Science, STEM subject areas (Chemistry, Physics, Materials Science, Geology), History, Museum studies, or Conservation) along with a willingness to work across disciplines.

After contacting one of the project supervisors, applicants should send an email to Caroline Jackson(c.m.jackson@sheffield.ac.uk) containing a C.V. detailing their academic record; an academic transcript from their university; the names and contact details of two referees; and an 800 word statement of purpose explaining why the applicant is interested in undertaking the programme of research and what experience and skills they would bring to the project, along with details of previous research experience, and why the applicant feels a WRoCAH studentship would be beneficial to their career.

Deadline for the first stage of the application process is 12 noon on Friday 30th November, 2018.
Interviews will take place on Wednesday, 12th December in the Archaeology Department of the University of Sheffield.
The main competition (Stage 2) closes at 5pm on Wednesday, 23rd January 2019. Successful candidates will be announced in April 2019.