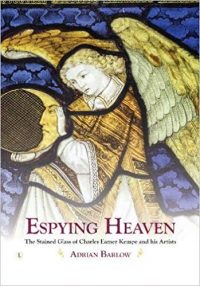 Barlow’s latest volume is a lavishly-illustrated exploration of the work of the Victorian church artist, Charles Eamer Kempe, and the team of artists he led and inspired. Espying Heaven is the first full-scale and full-colour survey of the achievement of arguably the most significant stained-glass designer of his era, and of his Studio. From the start, Kempe gathered around him a close-knit team of artists and craftsmen who together developed his vision of a distinctive aesthetic setting for worship based on late medieval art, and, in particular, the stained glass of northern Europe. This book illustrates the evolution of ‘the Kempe style’ and allows readers to judge for themselves the extent to which C.E. Kempe & Co. (1907–1934), established by Kempe, succeeded in working within the tradition established by his founding artists.

The book offers detailed discussions of Kempe’s work, with a strong focus on particular windows, themes and relationships. There are chapters on Kempe’s work in cathedrals; in some key churches in Britain and in particular locations such as Oxford and Cambridge. Other chapters examine the influences that led to his characteristic style as exemplified in major subjects such as the Annunciation and Incarnation, the Passion of Christ and the lives of the saints. Comparisons and contrasts between Kempe glass and that of other firms (including Morris and Co., Burlison and Grylls, and Christopher Whall) lead to a concluding evaluation of his legacy and standing today.

This volume is intended as a companion to Barlow’s biographical study, Kempe: The Life, Art and Legacy of Charles Eamer Kempe (The Lutterworth Press, 2018). In its own right, however, Espying Heaven both documents and celebrates a style of church art and decoration that has had a defining influence upon the Anglican Church worldwide. It highlights key features of Kempe glass, exploring questions of representation, symbolism and technique and suggesting new ways of ‘reading’ a Kempe window.

With photography by Alastair Carew-Cox.