A Royal Visit for the Stained Glass Museum

Fig. 1. HRH the Prince of Wales examines a window in the Stained Glass Museum’s gallery with the museum’s curator, Dr Jasmine Allen.

On 27 November, the Stained Glass Museum celebrated the upcoming 40th anniversary of its opening to the public with a visit from His Royal Highness the Prince of Wales. The Prince became patron of the museum during its 25th anniversary appeal, and in this, his second, visit to the museum he enjoyed seeing how the museum’s collection has grown and developed since his last visit in 2000. He went on to join over 200 guests at a reception in the Lady Chapel at Ely Cathedral, in the north triforium of which the mu-seum is housed. At the reception, the Prince cut the museum’s 40th birthday cake and unveiled a plaque commemorating the visit. 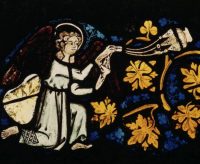 The British arm of the international stained glass research project, the Corpus Vitrearum, recently celebrated being awarded charitable status. As a registered charity, the CVMA (GB) will more easily and widely by recognised as existing for social benefit, and will now have access to certain sources of grant funding open only to organisations with charitable status, allowing us to fund raise more effectively.

Following on from the discovery, featured in last month’s Vidimus (issue 121), of stained glass at the Güell Palace in Barcelona from the studio of T. W. Camm, this month brings further evidence of the international travels of stained glass produced in Britain in the nineteenth century – as well as modern day commitment to preserving these treasures.

Fig. 1. Stained glass by William Warrington in the apse of Norwich Cathedral.

The Basilica of St John the Baptist in Newfoundland and Labrador, Canada, houses what the cathedral believes to be the largest collection of windows anywhere in the world, outside England, by the London-based stained glass window-maker, William Warrington (1796-1869). Having trained under Thomas Willement, one of the earliest Gothic Revival stained glass makers of note, Warrington had established his own work-shop by the early 1830s and was the preferred choice of A. W. N. Pugin to produce windows for his commissions – until becoming too expensive for the architect by the end of the decade. Best known, perhaps, for his fine work at Norwich and Ely Cathedrals, and his early publications on Gothic stained glass, Warrington’s windows at St John’s, together with others, including a series of smaller, later windows made in Ireland, now form the heart of a new publication, Stained Glass Windows of the Basilica-Cathedral of St John the Baptist, St John’s Newfoundland, produced not only to publicise the beauty of the church’s stained glass, but to raise much-needed funds for their restoration. 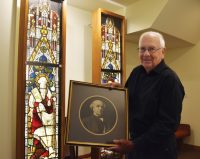 Fig. 2. Dick Clayton holds a photo of his great-grandfather, John Richard Clayton, co-founder of Clayton and Bell, in front of stained glass by the company, recently pur-chased by Clayton.

Elsewhere in Canada, in Sechelt, on the Sunshine Coast of British Colombia, stained glass by one of the most productive and successful Gothic Revival workshops, Clayton and Bell, has recently been obtained by the Clayton family. The glass, featuring figures of St James and St John beneath elaborate architectural canopies, was purchased from a Bedfordshire-based stained glass art dealer, following months of detective work by Dick Clayton, great-grandson of John Richard Clayton, co-founder of Clayton and Bell, to track down glass by the company. The panels are currently on display in a local church 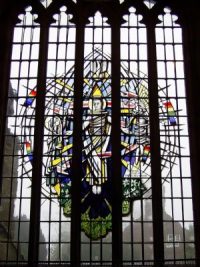 Saturday, 23rd February, 2019, 10.30 am York Open Studios (YOS) is an annual arts event celebrating the best artists and art makers living in and around the city of York. As part of this event, YOS is proud to pre-sent two public lectures, by the sculptor, Richard Mackness, and stained glass artist, Ann Sotheran.

Ann, whose lecture may be of particular interest to readers of Vidimus, is a York native, with a studio established since 1987. Elected a Fellow of the British Society of Master Glass Painters in 2007, Ann has fulfilled commissions in churches, private houses and public buildings. Her largest commission to date is the 90 sq ft window in Bunbury Church, Cheshire.

Ann’s talk will consider her work, her inspiration, her materials and techniques. It will take place in the King’s Manor, Exhibition Square, York YO1 7EP, and tickets cost £6.00. For further information and to purchase a ticket, visit the eventbrite website.

British Society of Master Glass Painters: a New Website and a Look Ahead to 2019

The BSMGP recently launched its beautifully transformed website (www.bsmgp.org.uk). It now contains not only information about the Society, its events, publications and how to become a member, but also serves as a broader resource for stained glass, both con-temporary and historic, as well as its conservation. It is worth a regular look by anybody interested in stained glass.

For those looking to organise their diaries for the coming months, the Society has an-nounced dates for its events in early 2019. These include:

The dinner will include a short, entertaining talk and a prize raffle. For more information, and to purchase tickets, which cost £35 per person, see the BSMGP website.

Adrian Barlow’s volume on Kempe, Espying Heaven, on which his talk will be based, will be published in January 2019 (see this issue’s Books), offering detailed discussion of Kempe’s windows, and placing them in the context of his contemporary firms, such as Morris and Co., Burlison and Grylls, and Christopher Whall, leading to an evaluation of Kempe’s legacy and his standing today. The lecture costs £17 and an evening meal, following the lecture, is available for a fur-ther £16. For more information, and to purchase tickets for the lecture and meal, see the BSMGP website. Both events will take place at the Art Workers Guild, 6 Queen Square, Bloomsbury, London WC1N 3AR.