Welcome to a new monthly feature launched by Vidimus with this issue. Every month we will spotlight an article or university thesis about medieval and renaissance stained glass which is now available on-line.

We start this new series with a link to a fascinating study of the world-famous late medieval glazing of St Mary’s church, Fairford, (Glos) England. [Fig. 1]

Written by CVMA advisor, Keith Barley MBE FMGP, who spent twenty years conserving the glass, his two volume dissertation on the windows for the University of York is now available on-line The first part of his study draws on Keith’s unique knowledge of the glass having handled and studied every panel in his workshop between 1986 and 2010. Focusing on materials and techniques, it includes chapters on the ferramenta (or framework of metal armatures) that support the glazing, and how the painters arranged the heads of figures to avoid adverse shadowing from the external bars; on the vidimuses and cartoons created in the production of the stained glass; on the nature of the glass that was used, its manufacture, source, and the employment of speciality types of glass (e.g., striated). It analyses glass treatment techniques employed at Fairford, such as cutting, abrading and piercing skills; the paint pigments and stains used in the windows; the glass painting techniques and applications; the kilns and firing of the glass; and there is, finally, an analysis of the lead, solder and construction of the panels. [Fig. 2] 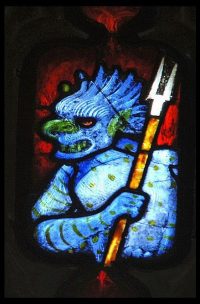 Among the discoveries presented in this part of the thesis are that three workshops of Flemish immigrant glass painters seem to have been involved perhaps with Barnard Flower, the King’s glazier, co-ordinating the overall project.

The second part of the dissertation focuses on the possible identity of the master designer of the scheme; of the artist who drew the original vidimuses which would have been shown to the client for his approval, before being adapted to full scale working drawings (cartoons) by the glazing team.

Barley suggests that a possible candidate for this commission is Michel Sittow (1469-1525), the son of Clawes van der Sittow, a designer and painter who is known to have worked on the glazing of the Kanuti [Canute] guild hall in the Sittow home city of Tallinn (now part of Estonia).  As a young man, Michel almost certainly began his apprenticeship in his father’s workshop but after the latter’s death in 1483 he emigrated to Bruges where he is thought to have continued his training in the workshop of the well-known painter Hans Memling (1430 -1494).  A number of the Fairford images have been linked to designs by Memling and his circle suggesting a familiarity with them. It may also be relevant that when Sittow’s widowed mother remarried in 1485, she chose Diderick van Katrick, a local glazier and glass painter, as her second husband implying that the family might have been comfortable about working and designing in this field.

In 1492 Sittow was appointed court painter to the Spanish monarchy and Barley believes that he subsequently visited England where he might have been introduced to members of the Tame family who largely rebuilt Fairford church in the 1490s and commissioned its windows in the early 16thcentury. 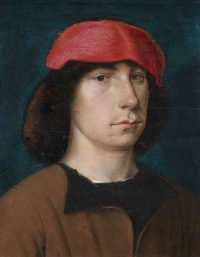 Fig. 4. Self-portrait of Michel Sittow, now in the Detroit Institute of Arts, Gift of Anne and Henry Ford II.

Discoveries of a possible MA monogram (Melchoir Alemán– Michael the German) in some of the windows have lent weight to speculation about Sittow’s role in designing the Fairford scheme. [Figs. 3 and 4]

‘Man in a Red Hat’, St Mary’s church, Fairford: the creation of a remarkable late medieval glazing scheme’ by Keith Barley MBS, FMGP, ACR, is available in two volumes [Vol. I Text; Vol. II Illustrations] and can be downloaded and saved here: http://etheses.whiterose.ac.uk/14278/