The Great Pestilence of 1348-9 (now known as the Black Death) and subsequent regular outbreaks of plague, as in 1361-62 and 1369, had devastating effects on Britain and other afflicted countries. Up to 65 per cent of the UK population may have died. Cities were depopulated, towns ravaged, villages sometimes abandoned. The after-effects lasted for decades. 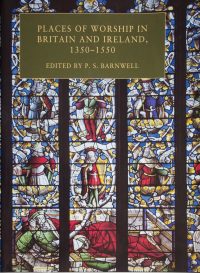 This book consists of twelve essays focusing on places of worship between these catastrophic events and the onset of the Reformation roughly two hundred years later. It is the fourth in a series of nine planned volumes covering every type of religious building and institution which has existed in the UK from the introduction of Christianity in Roman Britain to the present day. It includes chapters about stained glass, music, monasteries, parish churches and much else. [Fig. 1]

Sarah Brown’s contribution focuses on the first of these. She begins by asking questions about the immediate effects of the plague on glass painters and their craft. With mortality rates higher in urban areas than rural districts it is inevitable that many workshops would have suffered. An immediate lack of people, money, perhaps even motivation, took their toll. But while some projects were suspended or delayed because of its effects, including planned schemes at York Minster, royal commissions seem to have continued without too much disruption. The building accounts for the Chapel of St Stephen at Westminster Palace for 1349-52 show that glaziers from twenty-seven counties were recruited to work on the glass, suggesting that although the plague may have crippled the London workforce, the king was neither deterred nor demoralised by the crisis.

Documentary and stylistic evidence from elsewhere suggests that recovery in other parts of the country was under way at least as early as the late 1350s/early 1360s echoing comments by Nicola Coldstream in her introductory chapter, that despite the horrors of the plagues, the ‘human will to survive, adapt and keep going asserted itself’.

Thus in 1356-9 Simon de Lenne (King’s Lynn), one of the provincial glaziers recruited by Edward III to help at Westminster (see above), was working on the windows at Ely Cathedral. In the same year three windows were made for St. Weonard’s church in Herefordshire at a cost of 13s. 4d, with 4d. paid for carrying them from Hereford and 2d. to hire a horse to carry William the Glazier ( see: Woodforde, ‘Glass-Painters in England before the Reformation’, Journal of the British Society of Master Glass Painters, vi/2, October 1935, pp. 62–69; ibid., vi/3, April 1936, pp. 121–128).

However, such recovery was not always straightforward. The author highlights several schemes from the third quarter of the fourteenth-century where the glass is of inferior quality to that which preceded and followed it, suggesting possible supply issues. These include windows at Edington Priory (Wilts) dating from c. 1358-61 and Heydour (Lincs) c. 1346 -62. [Fig. 2]

Another effect of plague losses was an inevitable shortage of skilled labour with the predictable result that glaziers’ pay rates increased and traditional seven year apprenticeships were sometimes abbreviated. As the old social order stumbled and new opportunities arose for the ambitious and hard-working, the status of master glaziers was also transformed. In Oxford the head of a local workshop dined at high table in New College, while others, such as John Thornton, the designer and overseer of the Great East window project at York Minster between 1405 and 08, ran prosperous and successful businesses. In both Wells and York, prominent glaziers became mayors of their respective cities.

The economic upheavals caused by the plague also created opportunities for ambitious individuals in other fields. Hence while well-established institutions, such as York Minister, the Benedictine priory at Great Malvern and Winchester Cathedral continued to fund windows, a new class of wealthy landlords and merchants, particularly in the wool and cloth industries, also commissioned glass. These included schemes such as those at John Browne’s Hospital in Stamford (Lincs), St Peter Mancroft in Norwich and Fairford (Glos). Collaborative efforts were also popular. The famous Pricke of Conscience window at All Saints church, North Street, York, was funded by several local families while at St Neot in Cornwall some windows were donated by local confraternities who clubbed together to afford their gifts. Women asserted themselves in stronger ways. Beatrice, Dower Countess of Ros, gave the St William window to York Minster and Anne Harling, a wealthy heiress, commissioned the east window of East Harling church (Norfolk).

Nor was it just the social class and gender of donors which changed. New architecture and larger windows provided new challenges … and opportunities. The iconographical programmes included greater use of multi-scene schemes narrating biblical stories or episodes from a saint’s life. Windows became integral components of liturgy and worship. Many complemented increased devotion to the Virgin Mary. 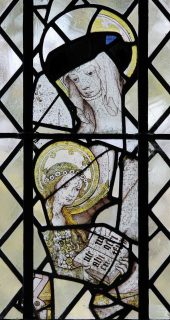 Windows also served as instructional aides. At St Laurence, Ludlow (Shrops) windows depicted the Ten Commandments. Elsewhere others reminded parishioners of their Christian duties – caring for the sick and hungry, (the Acts of Corporal Mercy), as at All Saints church, North Street, York; avoiding sin, (the Seven Deadly Sins) Newark, Notts; learning the Apostles Creed, (the tenets of the Christian Faith), Fairford Glos, and respecting the Seven Sacraments of the church, Doddiscombleigh, Devon. Images such as The Virgin Mary and her mother St Anne at Thenford (Northants), and The Holy Kindred at York Goodramgate encouraged and supported ideas about Christian family life. Texts in English, such as those accompanying a multi-scene Life of St Andrew window at Greystoke, Cumbria, reflected higher literacy rates. [Fig.3]

The final part of the chapter traces the growing influence of foreign, mainly Netherlandish, glaziers in England. By 1474 there were at least twenty four working in London. The wealthy adored the illusionistic evocations of reality they painted and by 1500 the new style had triumphed. In 1505 the immigrant glazier, Barnard Flower was appointed the King’s Glazier. When the baton was passed in 1517 it went to another immigrant, Galyon Hone (d. 1551). Examples of their work can be seen at Fairford (Glos) and King’s College Chapel, Cambridge.

Many writers have called the style popularised by such men Anglo-Netherlandish, but Sarah Browne concludes by wondering if this description may underestimate the extent to which London was a stylistic melting pot for different artists.

Other chapters are also interesting. Phillipa Turner examines Cathedrals during this period, particularly in terms of architecture, devotion and commemoration. Several echo the now familiar ‘revisionist’ view of the Reformation; that rather than sweeping away unwanted and unloved monastic institutions the reality was that many abbeys remained vibrant institutions almost to the moment of their dissolution. Cathy Oakes charts developments within Benedictine monasteries while Glyn Coppack examines Carthusian houses. Four contributions discuss Scottish, Irish and Welsh places of worship. Among these, Richard Fawcett and Lizzie Swarbrick catalogue the architecture and fittings of Scottish Collegiate Churches. As Vidimus readers will know, very little medieval stained glass survives in Scotland but regular trade with the Netherlands and an altarpiece painted for Trinity College Kirk, Edinburgh, by the Netherlandish artist Hugo van der Goes (c. 1440 – 1482) in the 1470s and now on loan to the National Gallery of Scotland, hint at the tantalizing possibility that some Flemish glass might have been imported. A chapter on the parish church in Wales by Professor Madeline Gray begins with the deprivations caused by the English suppression of a Welsh uprising. It took until the late 15th and early 16th centuries for the church and principality to fully recover with various commissions for new stained glass schemes documented by the author (p. 194). The chapter is also particularly memorable for its discussion of the use of poetry in Welsh churches, a unique cultural distinction. [Fig.4]

The book concludes with an essay by the general editor Paul Barnwell, which discusses inter alia the relationship between worship and the interiors of medieval churches. While acknowledging suggestions that the introduction of fixed seating may have been related to a greater emphasis on sermons and even attempts to maintain social hierarchies after the disruption of the Black Death, the author links the addition of clerestories, a loft over the rood screen and the introduction of pews in the nave to a theological impetus for parishioners to concentrate on the images of the suffering Christ on the Rood and the miracle of transubstantiation during the celebration of Mass in the chancel. Although not mentioned we can certainly add some east window glazing schemes to this list.

As usual with Shaun Tyas publications, the book is produced to a very high standard with numerous illustrations, including many in colour. Collectors of the series will be delighted with this latest addition and there is much of interest to a wide spectrum of medievalists, including chapters not discussed in this brief review.