Welcome to our ongoing series which spotlights an article or university thesis about medieval and renaissance stained glass which is now available on-line.

In the vineyard of the Lord 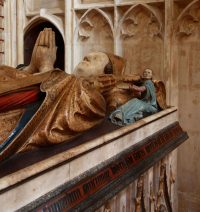 This month we provide a link to a fascinating article by Dr Veronika Decker from the Institute for Art in Vienna, about two late fourteenth-century stained glass schemes featuring images of the Tree of Jesse commissioned by William of Wykeham (b.1320), the immensely wealthy Bish-op of Winchester from 1367 until his death in 1404. The schemes were in the chapels of the educational foundations he founded at New College, Oxford (1379) and Winchester College, Hampshire (1382). [Fig. 1]

Tree of Jesse schemes pictoralise the coming of the Messiah; the Old Testament prophecy by Isaiah that, “There shall come forth a rod out of the stem of Jesse, and a Branch shall grow out of his roots: And the spirit of the LORD shall rest upon him”, [King James Bible] and Matthew’s subsequent genealogy of Christ (Matthew 1:1–17). The image typically shows a vine or tree springing from the recumbent figure of Jesse (the father of King David) and climbing upwards. Its branches bear figures depicting Christ’s royal and spiritual ancestors while the central stem supports the figure of the crucified Christ and the Virgin Mary. [Fig. 2]

Although this glass has been described in several print publications (see Further Reading) Dr Decker’s article adds fresh insights and new dimensions to our understanding of these major glazing projects. 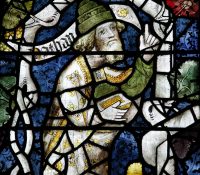 She argues that the inclusion of imagery depicting the biblical prophecy of the Tree of Jesse in the windows of both college chapels was, in part, a metaphor for ideas about the transmission of learning and education. At New College the scheme was in the west window; at Winchester in the east. Evidence suggests that both windows were of similar design.

Decker cites texts by Wykeham likening the sister colleges to a planted vineyard and also dis-cusses how images in the windows of the Virgin Lactans nourishing the infant Christ child with her milk resonated with medieval ideas about a college being an educationally nourishing mother.

Dr V Decker, ‘In the Vineyard of the Lord: Art, Imagination, and the Stained Glass Commis-sions of William of Wykeham in Fourteenth-Century English Colleges’, British Art Studies, Issue 6, Summer 2017