Ever since the inception of serious study of nineteenth-century stained glass, there has been some appreciation of the way in which the display and reception of stained glass at international exhibitions has influenced its style and development. These exhibitions have conveniently provided the historian with contemporary comment from newspapers and specialist interest journals on evolving and reactionary stylistic approaches to painting on glass. These differences of opinion over the pictorial and historicist approaches on display at the Great Exhibition of 1851; Pugin’s Medieval Court at the same exhibition, where the stained glass by John Hardman’s firm was not well-lit; and the mixed reception to the stained glass of Morris, Marshall, Faulkner & Co. at the London International Exhibition in 1862, have become an established part of our narratives of Victorian stained glass. 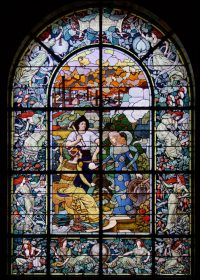 Although the contribution of continental exhibitors to these two international exhibitions has been discussed, the continuation of these exhibitions throughout the second half of the nineteenth century, which were also held in Paris, Philadelphia, Chicago and Melbourne, has usually been overlooked. This exemplary study by Jasmine Allen of the display of stained glass at these exhibitions brings a truly international approach to the study of stained glass in the nineteenth century. Exhibiting stained glass firms appreciated the opportunities for gaining domestic and overseas commissions as a result of their participation, competing with one another in a globalised stained glass industry.

The categorisation of stained glass at different exhibitions provides a valuable insight into the way in which stained glass was understood in the nineteenth century. It was often classified as an ‘industrial art’ and its status and that of its artists fluctuated in different countries. Descriptions of the various ways in which stained glass was presented is provided, along with discussion of how the windows are perceived when separated from their architectural environment. Often windows were presented not so much as exhibits at an art gallery, but as products in a shop window or showroom, and stained glass by James Powell & Sons at the Philadelphia Exhibition of 1876 was augmented by displays of their carpets and rugs. In contrast, stained glass was sometimes deliberately displayed to create colourful spectacle, or, especially in the case of religious work, an atmospheric and mystical environment.

The study provides an elegant account of the variety and development of styles in the second half of the nineteenth century, offering a balanced approach to under-appreciated work in vitrail-tableau (pictorial glass, painted with coloured enamels), the reproduction and adaptation of medieval styles, and the innovations in the work of Morris and his circle. We learn of the variety of work displayed by the studio of Paul Bitterlin, a prolific participant at five exhibitions in Paris and Philadelphia from 1855 to 1889, who exhibited work in ‘Egyptian, Arabesque, Russian, medieval, and Renaissance styles’ in 1878, and of the fashion for Japanese design at the same exhibition.

The author has tracked down windows exhibited at these events and illustrated some of them among the forty plates that accompany the text (Fig. 1). For example, a window designed by the architect-sculptor John Thomas and made by Ballantine & Allan, for the Paris Exposition Universelle of 1855, expressed the new diplomatic alliance between Britain and France, is now at home in the Council Chamber of Lowestoft Town Hall in Suffolk (Fig. 2). The window includes standing figures of St Denis and St George as the ‘Guardians of Europe’ and was commissioned by the entrepreneur and MP Sir Samuel Morton Peto. Other works illustrated include James Powell & Sons’ The Union of Art and Science, 1866, designed for the South Kensington Museum by Francis Wollaston Moody, but now in store, Hardman’s east window for Doncaster Minster, and works exhibited by John La Farge and Tiffany & Co. in Paris and Chicago. 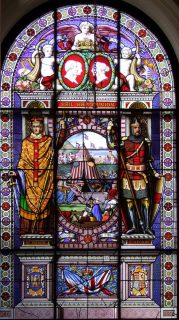 As an example of the new directions in which the study leads, the closing chapter considers how stained glass exhibited at the international exhibitions was used to further nationalist, imperialist and racial agendas. The medium could be expressive of national characteristics and ambitions, and this was sometimes reflected in the subject matter of the windows displayed. We are reminded of the long tradition of using coloured glass in north Africa, underlining the error in approaching the use of the medium as a purely western European and Christian tradition.

In addition to providing a new international narrative of stained glass in the second half to the nineteenth century, the book is also a useful work of reference. Each of the exhibitions under discussion is given an introduction with useful subheadings in chapter two, and a complete list of exhibitors, arranged by country is provided at the end of the book. The listing shows the exhibitions at which they exhibited, and which of them were awarded prizes or ‘honourable mentions’. The list is instructive in itself and there are a striking number of makers from France in particular that will be unfamiliar to British readers, along with many other European makers and those from North America and Australia.

Even a large number of the mid-century British exhibitors remain enigmatic. What we know of makers such as Talbot T. Bury and Samuel King Bland, both of London, or of T. Gaunt of Leeds, who exhibited at the Great Exhibition, or of G. Austin of Canterbury and W.H. James of London, who exhibited at the Paris Exposition of 1855, amounts to almost nothing. At both home and abroad, there are many discoveries to be made in the field of nineteenth-century stained glass.