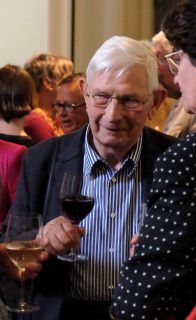 An article about the fourteenth- to seventeenth-century armorial glass in East Sutton church (Kent), by the genealogist, Marcus Herbert, appears in the 2018 volume of Archaeologia Cantiana, the Journal of the Kent Archaeological Society. 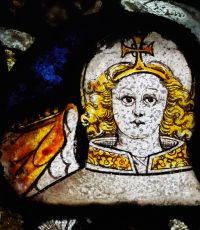 East Sutton church (seven miles south-east of Maidstone) dates from the thirteenth to the early six-teenth century. Most of the medieval glass is in the south chapel and shows, inter alia, fragments of heads and shoulders of two 15th century angels wearing cross diadems, a head of the Virgin Mary with a scroll inscription around her halo, ‘ecce ancilla domini’ and an interesting collection of armorials. [Fig. 1]

The author discusses the heraldry of these armorials and discusses why they appear in the church. He suggests that some panels might be imports from the neighbouring East Sutton manor house. The armorials include heraldry of the families of Valence, Hastings, St Leger, Mortimer of Wigmore, a Duke of York, Guildford, Halden, Argall, Scott and Filmer.

The article also chronicles the destruction of glass in the church during the English civil war. According to notes compiled by Sir Robert Filmer (d.1653) on 27 July 1642:

Cornet May (a cornet was the third and lowest grade of commissioned officer in a British cavalry troop. The rank was abolished in 1871’ Ed.) came to search East Sutton Belfry for arms there, he tore the surplice with his owne hands, tooke away a Bible, a service booke and a booke of homilies out of the Church and broke the glasse windows.

Herbert suggests that these notes were copied almost verbatim from his wife’s diary or perhaps vice versa, the main difference being that Lady Anne Filmer apparently wrote of the same attack, ‘and broke down the screen and the painted glass windows’. ‘The Painted Glass at East Sutton Church and the Arms of a Duke of York’, Marcus Herbert, Archaeologia Cantiana, Vol 139, 2018, pp 1-15.

Followed by a viewing of the David Hillman ‘Purim’ window from the Old Bayswater Synagogue in The Stained Glass Museum.

Fig. 1. Window from the old Bayswater Synagogue by David Hillman, now on display at The Stained Glass Museum.

In this talk Prof. Newman will shed light on the life and work of David Hillman (1894-1974), a prolific Anglo-Jewish artist who understood the deep connection between art and religion. Hillman was born in Glasgow and his father was Dayan Samuel Isaac Hillman, of the London Beth Din. He created stained glass windows for many London Synagogues, and one of his windows made for the old Bayswater Synagogue (demolished 1966) is on display at The Stained Glass Museum. Prof. David Newman is a great nephew of the stained glass artist David Hillman, and a re-searcher of political geography and geopolitics at Ben-Gurion University of the Negev, Israel. On a recent sabbatical, Prof. Newman has been researching the stained glass windows created by artist David Hillman that can be found in synagogues in Israel and England. He is interested in both their artistic content and the social context of the people who were involved in their creation – ranging from Eastern Europe to Britain and to Israel.

Booking is now open through the Museum website. Tickets cost £9 for Guests and £7.50 for Friends of the Stained Glass Museum.

The first of a series of windows have been removed as a major restoration project gets under way at York Minster. The windows, in the south choir clerestory, date to the early years of the fifteenth century – a period of great glazing activity at the Minster – and are now showing their age after 600 years of braving the bracing Northern climate unprotected.

Work on the glass will take at least a decade to complete, treating corrosion, damage and paint loss, and stabilising the leads that hold the panels together. When the windows are ultimately restored to their openings, their fine painting and sophisticated iconography, telling of the triumph of Christianity in the North of England, will, once more, be fully in evidence. Importantly, the protective glazing with which they will be reinstalled will also preserve the windows for future generations.

The restoration of the south choir clerestory marks the first phase of a longer, twenty-year plan at the Minster to restore and properly protect the medieval stained glass for which the church is celebrated.

Hello, I have an amateur interest in photographing stained glass and often find the Vidimus articles of great interest. But I have a query and wonder if there is anyone who can provide an answer. I recently took some photographs of some of the glass in the Northgate Room in Ipswich Library ( opened September 1924 ; architect Munro Cautley ) but, try as I may, I haven’t been able to find any hint as to the name of the glassmaker. I would dearly love to know the name of the artist/glassmaker.Here are the windows. They all feature people or places with a local con-nection to Ipswich. All I know is that the library was opened in 1924 and the architect was a local man, Munro Cautley. I imagine the glassmaker was also probably local but I’ve been unable to discover who it was. 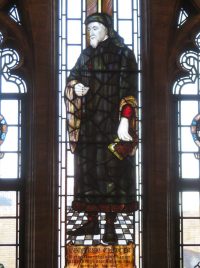 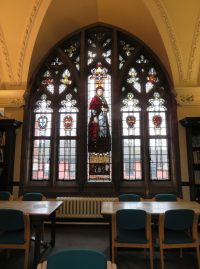 Thank you for reading this, Janice Tostevin (jayvee2tee@gmail.com) 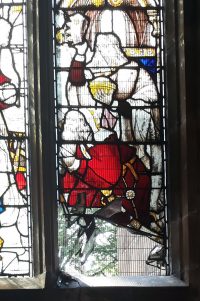 An appeal has been launched by Friends of St Mary’s church in Shrewsbury after an important renaissance window was damaged during a break-in to the church in the early hours of June 10th.

Early estimates suggest that it may cost up to £10,000 to restore the glass.  The burglar is thought to have stolen £40 from the donation box and cash till.

The window depicted two of the three Magi. According to a local guide the glass is thought to have come either came from Munsterbilzen Abbey in Limburg, Belgium, or Trier Cathedral in Germany.

St Mary’s church contains a magnificent collection of both English and continental glass, much of the latter bought and installed in the early nineteenth-century.

The church is in the care of the Churches Conservation Trust

On October 4 2019, the SGG Conference will take place in the Chapterhouse at Gloucester Cathedral. The renowned collection of stained glass at the cathedral will provide a wonderful backdrop to this event.

Glass is a fragile medium and historic windows are likely to have been restored multiple times prior to any contemporary conservation project. During these previous restorations, many materials and techniques may have been introduced to the window (e.g. infills, cold-paints, consolidations, plating and structural changes). The production of modem stained glass can also incorporate techniques especially prone to deterioration, such as lacquers, applique, etc., all of which influence our conservation methodology.

The Call for Papers is now open! For a chance to speak at the conference or to display a poster please send us your proposals on the theme of “Accommodating the Past.”

The Stained Glass Group would be delighted to hear how the previous treatment of panels and windows has influenced your conservation approach? Have extant techniques or materials caused damage? Are they no longer sustainable? Have they negatively impacted the aesthetic or original iconography of a window? Have you created new ways of working to accommodate issues from the past? And, how have past decisions influenced your recommendations for future conservation projects?

Papers are invited that seek to explore and examine these issues. Multi-disciplinary papers are welcomed.

Proposals for 20-minute papers (no more than 300 words in length, including the title, email address and name of the corresponding author) should be sent together with a short CV/pen picture to the Stained Glass Group Committee at iconstainedglass@gmail.com