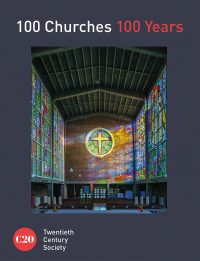 This revelatory book has much of interest for stained glass enthusiasts. Every 20th-century architect of substance tried their hand at church building with some surprising, even startling, results and their creations range from the mass of the two Liverpool cathedrals to the tiny St Sarkis Armenian Church in Kensington, London, which originally had seating for only 51. Here, gathered together, the diversity of design is strikingly apparent, moving from Gothic Revival brick, through to concrete and steel hyperbolic paraboloid structures (concisely defined in a useful glossary).

The contents of the book comprise individual essays by the editors and others; the buildings are grouped by date of building, and some of the major firms are the subject of Practice Profiles. The combination of fine external and internal photographs, and short but highly informative notes on each church makes for a very enjoyable read.

Stained glass is a prominent element of many of the churches featured, none more so than that on the front cover, Our Lady of Fatima in Harlow, Essex, by Gerard Goalen in 1960, with glass by Dom Charles Norris (Fig. 1). This, in its way, is reminiscent of Auguste Perret’s 1923 Notre Dame de Raincy, with glass by Maurice Denis and Marguerite Huré (Fig. 2), identified by Elain Harwood in her essay, “Church Building in Western Europe 1922-75”, as where modern church architecture truly begins. And where the architecture demands it, walls of vibrant coloured glass is the stunning outcome.

Many of the illustrations we normally see of stained-glass windows show little of their architectural context, mainly concentrating on their design, use of colour, and craftsmanship. In this book, however, (apart from the chapter by Jane Brocket, of which more below) where a large glass scheme is shown, it is invariably with a wide-angled perspective. To take as an example Keith New’s spectacular and important window at St Ermine, Lincoln; in the 2018 book on New by Diana Coulter and Robert Smith, there are fine pictures of the glass in the Catalogue Raisonné (no. 13), and also, unusually, in the text, an exterior view of the building’s amazing roof line. Here (Fig. 3) although we don’t see all of the glass, we can, I think, better appreciate the dramatic juxtaposition of glass and roof. 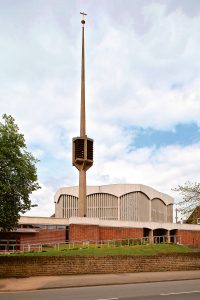 Similarly, it is good to see an external shot of the Piper/Reyntiens window at Robinson College Chapel, Cambridge with its “inverted stepped ziggurat” by Gillespie, Kidd and Cola in 1981, whose Practice Profile includes the interior view of the glass. Goalen’s Church of the Good Shepherd at Woodthorpe, Nottingham of 1964, is also afforded an external view (Fig. 4), and a double-spread interior (Fig. 5), which shows the Patrick Reyntiens’ composition to great effect.

While not wishing to labour the point, I cannot resist including St Jude, Wigan, Greater Manchester (Fig. 6). The church, by Lionel A.G. Prichard and Son, completed in 1965, might look somewhat of its time externally, but inside are the larger than life-size dalle de verre windows by Robin Riley. Lack of space in the book caused the right-hand side of this image to be cropped; this (Fig. 7) is the complete picture. Certainly worth a detour when visiting Wigan Pier. 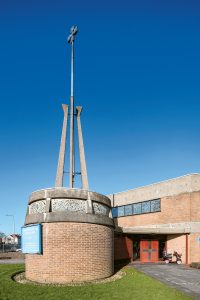 It is interesting to contemplate that, if one permits church architect Stephen Dykes Bower’s additions to St Edmundsbury, Bury St Edmunds, Suffolk, the book includes six English cathedrals built in the 20th century. These are mainly discussed in architectural terms but it is rather surprising that the ground-breaking glass at Coventry does not merit a mention. However, the one splash of colour in Clifton RC Cathedral, Bristol, of 1973, a dalle de verre wall of glass by Henry Haig is illustrated. Of the six, the only one not to have any stained glass is Quinlan Terry’s classical revival Brentwood RC Cathedral, Essex, of 1991, which has plain glazing throughout.

The separate essays in the volume are well chosen. Kate Jordan on “Places of Worship in a Changing Faith Landscape” considers the effect of migration, and the diverse religious buildings that came with it; for example, the London Central Mosque, the Bushey Jewish Cemetery, Hertfordshire, and the Vajrasana Retreat Centre at Waltham-le-Willows, Suffolk.

Alan Powers, past chairman of the 20th Century Society, charts the changes in “Art and Artefacts” through the century, identifying architect influencers such as Ninian Comper, Dykes Bower, Martin Travers and Goodhart-Rendel. The clergy were, it is noted, also active influencers. The Warham Guild, founded by Percy Dearmer and others brought new fittings to dreary interiors full of ‘badly designed, uninspired and badly produced’ artefacts, as Cyril Pocknee described them. Artist/craftsmen began to be commissioned by churchmen like Bishop Bell and Dean Hussey, promoting the work of individuals such as John Piper, Marc Chagall, Henry Moore, Graham Sutherland, Hans Feibusch, Duncan Grant and Vanessa Bell. The emphasis was on good art and design. Powers does not deal with glass; that is tackled by the author of How to Look at Stained Glass, 2018, (see Vidimus 120), Jane Brocket. 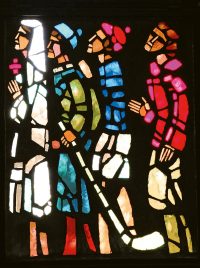 Jane conveniently divides the century into three periods: up to WWII; to the 1970s; and to the present. This allows her to identify the key influences and trends. Her article is a roll-call of the significant artists who made a difference by their approach to draughtsmanship and technique. For instance, she contrasts the “explosive, almost mystical windows of Karl Parsons” with the “pale, pretty and polite” windows by Travers, Comper and Webb; and, after the end of WWII, perhaps one of the greatest contrasts within the same building, Eton College Chapel, Berkshire, between the windows of Hugh Easton and Evie Hone. She notes too that, “in the right hands dalle de verre can be stunning” and illustrates a detail of the window by Gabriel Loire, 1958, in St Richard, Chichester, Sussex (Fig. 8).

The other illustrations of windows Brocket provides are also in the form of details, in line with her approach in How to Look at Stained Glass. These are: Joseph Nuttgens, 1952, in St Etheldre-da, Ely Place, London; Harry Stammers at St Mark, Broomhill, Sheffield, Yorkshire, 1963; Fred Cole at Christchurch, Southwark, London, 1967; Harry Harvey in Sheffield Cathedral, 1967; Margaret Agnes Rope in Shrewsbury RC Cathedral, Shropshire, and Alfred Wolmark at Slough, Berkshire, 1915. The illustrations do not reflect the timeline of the article and it would have been more apposite to show some work by living artists, many of whom feature in the text. Perhaps there were editorial reason for not doing so.

Many Millennium windows were commissioned in the UK, described here as “child friendly and carefully inoffensive”, which were more community than religion oriented. Brocket takes the rather pessimistic view that, after this spike, church spending would concentrate on other priorities, and money for new windows would decline. However, a glance through the Portfolio of new work by Fellows and Associates in recent issues of the BSMGP Journal of Stained Glass reveals many vibrant, exciting, and most importantly, completed projects, the majority of them church commissions. Are there then other factors at play? Maybe, in this period of austerity, parish and private benefactors are stepping in to help beautify their churches with new art. Some examples can be viewed online in the Ecclesiart section of artandchristianity.org.

Paradoxically, for me, one of the most effective windows in the book is the plain glass grid of multiple crosses in the east window in Fitzwilliam College Chapel, Cambridge, which looks out on the wonderfully contorted branches of a large plane tree. Thought provoking, as is the whole of this splendid book.

I am grateful to Frida Green of Pavilion Books for supplying the illustrations, and to Roger Rosewell for his helpful comments.

In the current issue of THE BRITISH ART Journal, Vidimus reader and glass-collector, Andrew Rudebeck, discusses the possible origins of a recently acquired painted glass panel, suggesting that it may be the work of the English Romantic painter, engraver and illustrator, John Martin, through comparison with an engraving known to have been his work.