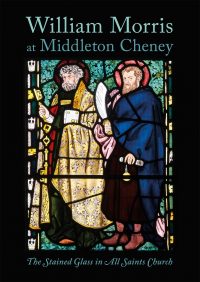 Fig. 1: William Morris at Middleton Cheney: The Stained Glass in All Saints Church.

All Saints Church, Middleton Cheney, Northamptonshire, includes a magnificent set of windows made by the William Morris workshop. The artists involved read like a roll-call of the Pre-Raphaelite Brotherhood and their associates – Sir Edward Burne-Jones, Ford Maddox Brown, Simeon Solomon, Philip Webb and William Morris himself. The windows range in date from 1864 to 1893 and include Burne-Jones’ unforgettable image of ‘Shadrach, Meshach and Abednego in the Fiery Furness’, installed in 1871. Little wonder that the ensemble has been called, ‘a place of pilgrimage’ and ‘unforgettable’. [Figs 1, 2]

This beautifully illustrated book is an attractive introduction to these masterpieces. It contains a useful description of their setting, makers, and purposes together with an informative window-by-window description of their subjects and designers. It is an invaluable guide to the church and a welcome addition to the literature about the Morris workshop.

The book is divided into four sections, each written by a different author. It begins with a survey of the history of the church and its architecture by Richard Wheeler. Documentary evidence suggests that the present chancel dates from c.1296, and that the rebuilding of the nave started sometime after 1302, with construction continuing during the Rectorship of William de Edington (1322-25), a future Bishop of Winchester. Apart from a shard of glass discovered in 2002, nothing is known about any earlier medieval glazing.

By the 1860s, a report in the Oxford Timesnewspaper said that the church, ‘had fallen into a sad and discreditable state of dilapidation’, prompting a major restoration and reordering programme of works by the prominent gothic revival architect, George Gilbert Scott (1811-78), and later, by his son George Gilbert Scott Junior (1839-97). 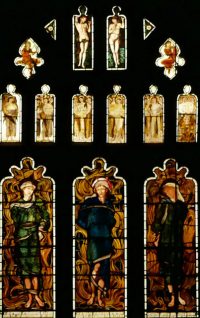 Fig. 2: The West Window of All Saints, Middleton Cheney. 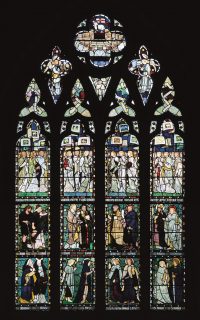 Part of this campaign included the redecoration of the church and a comprehensive plan for an overall scheme of stained glass co-ordinated by the architect and the Revd. W. Buckley.

The next chapter by David Thompson contributes a brief survey of the William Morris workshop, its formation in 1861 and subsequent evolution.

The third chapter is a catalogue of the glass itself, written by Brian Goodey, Emeritus Professor at the School of Architecture at Oxford Brookes University. Like the other contributors to the book he is also a local resident who was stirred into writing about the church and its glass by a major repair and restoration campaign largely funded by the National Heritage Lottery Fund in 2018.

Professor Goodey’s descriptions follow the order of installation, beginning with the East Window in 1865. Consisting of a series of illustrated tiers jostling with figures looking upwards to an image of the Adoration of the Lamb, it has been praised as, ‘one of the most splendid achievements in all English stained glass’. 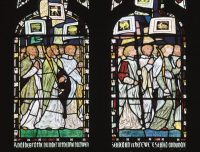 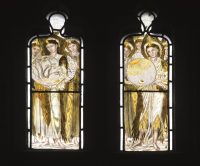 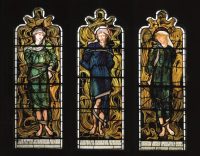 The West Window of 1871 also deserves special mention. It has been lauded by art historians as anticipating the Art Nouveau style and shows three subjects in three tiers: from top to bottom, Adam and Eve in the upper panels; below them, Six Angels holding disc-like globes illustrating the individual Acts of Creation; and finally, the Story of the Fiery Furnace in the three main lights with flames swirling around the figures in ribbon-like golden tendrils. [Figs 5, 6]

The fourth chapter in the book is also fascinating as it seeks to explain the windows not only by subject or story but also as a personal interpretation of their deeper Christian meaning… unusual and enjoyable.

The book concludes with two appendices, the first listing the location of other Morris and Burne-Jones glazing schemes; the second, a short bibliography of books consulted or cited by the authors.