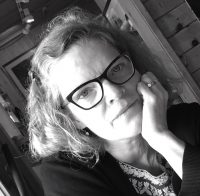 Dr Nancy Thompson is a Professor of Art History at St. Olaf College in Northfield, Minneapolis, USA. This month’s From the Archives page showcases an article written by Professor Thompson and published in the Journal of Glass Studies, Volume 56, 2014, pages 237-251. [Fig. 1]

‘Designers, Glaziers, and the Process of Making Stained Glass Windows in 14th- and 15th-Century Florence’, discusses the problems faced by glaziers/stained glass artists in Renaissance Italy where ‘painting and sculpture [was] often prioritized over the so-called lesser or decorative arts’. Indeed, for the Italian Renaissance biographer and artist Giorgio Vasari (1511–1574), the very definition of a good stained glass window was that it should appear not to be one, as when he praised the French glazier Guglielmo Marcillat (1470–1529), for his windows in Arezzo Cathedral and for making “the pictures for his windows with such good method and order, that the mountings of lead and iron, which cross them in certain places, were so well fitted into the joinings of the figures and the folds of the draperies, that they cannot be seen — nay, they gave the whole such grace, that the brush could not have done more — and thus he was able to make a virtue of necessity.”

Among the consequences of the hierarchical approach to the arts was that famous designers such as Lorenzo Ghiberti, Donatello, Paolo Uccello, and Andrea del Castagno were often invited to design windows without having any particular expertise in the practical issues of making them or how they would transmit light. And unlike earlier traditions which saw the decorative and colour compositions of windows left to glaziers, as was the custom in the 14th century, 15th-century glaziers were often required to create windows that mirrored the complete, finished cartoon provided to them irrespective of the difficulties it posed during the making/leading process.

Other books and articles by Professor Thompson which may be of interest include:

“’Reviving the past greatness of the Florentine people’: Restoring Medieval Florence in the Nineteenth Century,” in Medieval Art and Architecture after the Middle Ages, eds. A. Jordan and J. Marquart (Cambridge Scholars Press, 2009), 171-94.

“Cooperation and Conflict: Stained Glass in the Bardi Chapels of Santa Croce,” in The Art of the Franciscan Order in Italy, ed. William Cook. The Medieval Franciscans I, ed. Steven McMichael (Leiden: Brill Publishing, 2005), 257-77.

“St. Francis, the Apocalypse and the True Cross: The Decoration of the Cappella Maggiore of Santa Croce in Florence,” Gesta XLIII/1 (2004): 61-79.