The 2020 Stained Glass Conservation Spring Masterclass was held at the King’s Manor, University of York, on the 29th of February. This year’s theme, ‘Stained Glass in Context: The Bigger Picture’, brought together speakers representing a varied perspective from the field of conservation, highlighting collaboration as an essential aspect of the conservator’s trade.

Sarah Brown opened by extending a warm welcome to the audience and reminded us that the Masterclass offers an opportunity for those interested and working in stained glass conservation to gather and learn, building a community, and bringing current students into contact with the sector they aspire to enter.

Martin White, head of business development and sales for the German glass manufacturer Schott, kicked off the conference by introducing an innovative material available from the company: a range of anti-reflective glasses, which offers conservators an exciting new option for protective glazing systems. Martin explained the technology behind the glass production, including the dip-coating process that results in the crystal-clear finished product. Using Cologne Cathedral as a case study, the audience was able to see the new glass set in the protective glazing systems currently being installed on the cathedral, providing evidence of the difference it offered compared to older methods of protective glazing already in place. The impressive results piqued the interest of the conservators present in the audience and encouraged a discussion regarding the standards of materials currently available for protective glazing.

Matthew Northover, a RIBA accredited conservation architect for Purcell, presented an exciting account of his experience managing the recent conservation of Auckland Castle, offering an opportunity for the audience to follow a conservation project from the architect’s perspective. The audience was taken on the conservation team’s journey as they worked to bring the castle back to life, while making sure it was suitable for the modern visitor experience. Of particular interest was Matthew’s discussion of the challenging ethical decisions that arose during the historic evidence-based restoration, explaining the processes that led the firm to the final product such as paint analysis to select the finishes for the walls and commissioning reproductions of historic furnishings. 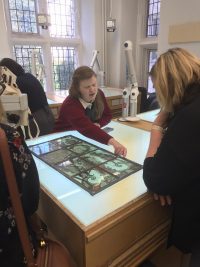 The day’s lunch break offered a chance to visit the Nicholas Barker Conservation Studio to view the second-year students’ stained glass conservation projects. Also on view in the studio were panels recently acquired by the University from the collection of the eminent York stained glass artist and conservator J.W. Knowles.

Continuing with the program, Rachel Arnold, a 2014 graduate of the MA in Stained Glass Conservation & Heritage Management, presented her work for the Bats in Churches project. During her illuminating presentation, Rachel explained that colonies of bats present some of the biggest challenges facing historic churches today. Showing shocking examples of the immense damage these endangered creatures can cause to the structure and collection of a church, the importance of the Bats in Churches project is clear. Rachel presented case studies that revealed the many creative and humane solutions devised to mitigate the damage caused by bats, ranging from off-site roosting boxes to access holes cleverly disguised in the glazing. Highlighting the need for collaboration in conservation efforts, Rachel extended an exciting request for further research into the topic. More information on this significant project can be found in this Issue’s Features section.

Kathryn Davies, who recently began her PhD in the History of Art department at the University of York, presented her research on William Burges’ church, Christ the Consoler, Skelton-on-Ure. Explaining the church’s sombre origins, Kathyrn led the audience on a detailed reading of the church’s iconography, seen in the sculpture and stained glass, interpreting the symbolism and revealing the memorial message. Kathryn’s research was warmly welcomed by students and faculty alike, who have fondly looked upon Burges’ colourful glass in person on the MA in Stained Glass Conservation & Heritage Management’s annual autumn visit to the church.

Another 2014 graduate of the MA programme, Catherine Spirit, who is also currently pursuing her PhD at York, presented her fascinating research ‘A Culture of Fragmentation – Glass and Literature 1780-1830’. Tracing the development of gothic fragment assemblages in stained glass, a layout found in the eighteenth century, most notably at Horace Walpole’s Strawberry Hill, Catherine linked the fragmented panel configurations to the literary models of the period. Showing the gothic novel’s reflection in the art of the time, Catherine’s research proposed it as a vital link for understanding the fragmented style which marked the resurgence of stained glass in England.

Dr Ivo Rauch concluded the day with an enlightening discussion of a recent conservation project in Jerusalem. Tracing the history of The Lutheran Church of the Redeemer in Jerusalem, Ivo introduced the challenges presented by the church’s windows, which had been partially replaced in the 1970s with glass designed by Anna Andersch-Marcus. Research revealed the life of the artist, whose innovative work in the medium of stained glass, previously obscure, warrants recognition. The experimental nature of the early large-scale fused windows, along with their placement in the hot Israeli climate had induced thermal cracking. Close examination and environmental monitoring, informed the decision to select preventative conservation methods, including exterior sun protection and interior safety barriers. Ivo’s discussion of the project offered a wealth of knowledge regarding the creation and conservation of twentieth-century stained glass, while shedding light on a deserving artist and creating a channel for further study. Vidimus is pleased to present Dr Rauch’s research in this issue’s Features.

The Spring Masterclass was a day full of learning and discussion, which allowed the stained glass conservation community to gather, offering opportunities for collaboration and further research in addition to showing current students the many varied paths their field of study can lead to. 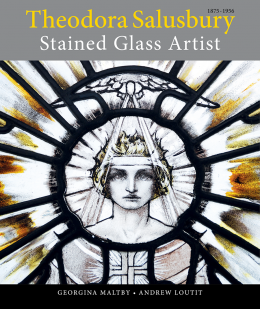 The general paucity of good information on many British Arts and Crafts stained glass artists is in marked contrast to the qualities and visual appeal of so much of their work. One such artist, Theodora Salusbury, has now been recognised in a new book (Fig. 1), written and produced by Andrew Loutit and Georgina Maltby, a great nephew and a cousin of the artist, including information on all of her known work. Miss Salusbury, as she is referred to throughout the book, was one of many talented women designing and making stained glass for churches in the early years of the twentieth century, inspired by the Arts and Crafts Movement, and her work can be found in churches across England, as well as single examples in Wales and at an unknown location in South Africa.

Theodora Salusbury grew up in Leicester and attended the School of Art in about 1894, before studying in London at the Royal College of Art, the Central School of Arts and Crafts and the Slade School of Art in the early years of the twentieth century, benefiting from the teaching of the influential artists Christopher Whall and Karl Parsons. Most of her work is found in churches, but she also undertook domestic commissions and at least one commission for a school. She lived between the wars in St Agnes, Cornwall, although about half of all of her windows are found in Leicestershire, where she retained family connections. The family also had deep links with the Church and her own deep Christian faith may be reflected in her choice of the peacock as her signature, a symbol of the Resurrection.

The book contains a richly illustrated introduction to her life and work, followed by lists of all of her known windows; both a list made by the artist and an expanded list based on the research of the authors. Following this initial section, each of the extant windows are well illustrated and provided with notes on the subject matter and the commissioning of the windows, with the addition of an image of the exterior of the church and a few interior contextual views. Each instance of the artist’s signature mark, a peacock, is also illustrated, demonstrating considerable variation in design from window to window. There are also listings and illustrations of four further panels, probably all exhibition pieces. The windows are arranged in alphabetical order by county and by church, which keeps windows at the same church together, but sacrifices chronology, which can be instructive in terms of stylistic development. Furthermore, dates of windows in the book are hard to locate, as they are omitted from the captions and need to be sought out in lists and in the text. 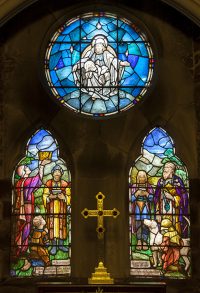 Most of her windows consist of rather static standing figures, although some are arranged in biblical scenes. Among her most original compositions is the east window at Newchurch, Monmouthshire (Fig. 2), depicting the Adoration of the Magi, in which she elevates the Virgin & Child to the large upper roundel, surrounded by birds and a starry sky; the adoring Magi look up from below, in the company of a favourite dog of Sir William Edward Carne Curre, in whose memory the window was given.

Although few of her windows have any particular dynamism or an original approach to their subject matter, her windows are distinguished by the effective choice of antique slab glass, the avoidance of repetitive and conventional decorative borders, and the painterliness of her work (although she reportedly did not like the term painting, which conveyed the idea of adding colour, rather than painting in brown glass paint on colour). In these respects, her work has much in common with other stained glass artists who either worked at, or had their windows assembled by, the studios of Lowndes & Drury in Fulham, such as Karl Parsons, Wilhelmina Geddes, the cousins Margaret and M.E. Aldrich Rope, and Caroline Townshend.

Some well-chosen details of her windows show off her work to good effect, and the book is greatly enhanced by the inclusion of working drawings and cartoons, many of which have a real charm of their own, none more so than the warmth and humanity of the Virgin & Child, opposite page 1 (Fig. 3). The drawing is undated and is most closely related to a panel in private ownership, although this depiction of the Virgin and Child is very similar to that found in other finished windows. 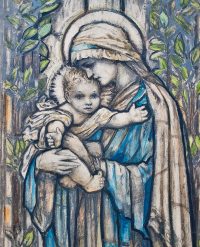 The amount of fieldwork, research and dedication required to complete such a study is considerable, as is the photographic skill needed to attempt to represent the colour and power of the windows in print, and the number of good quality photographs are an essential component of the success of the book. Studies like this are rare and the book is to be welcomed by all who have interests in ecclesiastical art of the twentieth century.

A version of this review was first published in the Journal of Religious History, Literature and Culture, 5, no. 1 (2019), 114–16. Vidimus is grateful to the publishers for their kind permission to reproduce it here.

Copies of Theodora Salusbury, Stained Glass Artist 1875–1956, by Georgina Maltby and Andrew Loutit, can be ordered online, for £20 plus P&P.