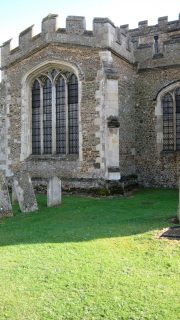 This article concerns glazing in two parish churches in neighbouring counties. Although the glass only survives in some quantity at one of the churches, both are documented in the wills made by members of the same family which will feature in the forthcoming Windows and Wills. Glazing and Fenestration Bequests in Medieval England and Wales c. 1277-c.1583, to be published as a Corpus Vitrearum Medii Aevi volume for Great Britain.

The first will was made by Walter Taylard shortly after the feast of the Conception of the Virgin on 25thDecember 1464 and proved on 18thMarch 1466. Of the numerous bequests in the will, the relevant passage is: ‘…corpusq’ meu’ infra eccl’iam b’te marie de Gamelyngey, sepeliend’ in quada’ capella s’ce katerine p’ me novit’ erecta & constructa…’(‘…and my body to be buried within the church of the Blessed Virgin Mary of Gamlingay in the chapel of St Katherine newly erected and built by me…’). 1 Walter, who was Steward of Merton College, Oxford, which held the advowson of Gamlingay church (Cambridgeshire), also made provision (some of it comprising the £37 owed to him by his son) for a priest to celebrate for his good estate immediately after his death and subsequently ‘…ad altar’ sce katerine ubi corpore meu’ sepeliet’ (‘at St Katherine’s altar where my body is to be buried’). 1

The second bequest was by Walter’s widow Margaret, made in her will on 26thSeptember 1475 and proved on 18thFebruary 1476 : ‘…corpus meum sepeliend’ in capella sancte katerine in ecclia de Gamelynghey…iuxta sepulcrum Walter Taylard nuper sponsi mei…lego pro ornamente’ summ’ altaris et altaris sce katerine unam mappam…’ (‘… and my body to be buried in St Katherine’s Chapel in Gamlingay church…near to the tomb of Walter Taylard lately my spouse …I leave for the  adornment of the high altar and St Katherine’s altar a cloth’. 2

St Katherine’s Chapel is in the north transeptand is lit by two three-light windows (Fig. 1); the indent of the couple’s monumental brass survives in the nave south aisle.On the adjacent first pier of north nave north arcade is a graffiti inscription in a 15th-century hand reading (‘hic est sedes Margarete Tayl…’ (‘here is Margaret Tayl(ard’s) seat’), which presumably refers to Walter’s spouse. The Suffolk Puritan William Dowsing visited Gamlingay church in 1643 on one of his iconoclastic forays and ordered that ‘3 superstitious pictures and a cross be taken downe, which the church-warden promised to doe.’. 3 All that survives of the chapel glazing are a few fragments, primarily fifteenth- and early sixteenth-century quarries, set in the north transept east window. Glass depicting the shields of arms of Merton College, Oxford, and Richard Fitzjames, Bishop of London and Warden of Merton between 1483 and 1507 are probably ex situ; the College held and still holds the advowson of Gamlingay.

Unlike Gamlingay, the other building patronised by the Taylards has retained much of its glazing. This is the two-bay chapel, also dedicated to St Katherine, on the south side of the chancel of St Lawrence church, Diddington, located adjacent to the Great North Road (the A1) near Buckden in Huntingdonshire; where there still stands the brick Great Tower and other buildings of Buckden Palace, a residence of the Bishops of Lincoln, built in the late fifteenth century. Walter Taylard’s father (also named Walter), who had acquired one of the manors in Diddington parish in c.1441, built St Katherine’s chapel (Fig. 2). His grandson William, in his will dated 22ndSeptember 1505, proved 12thOctober 1505, instructed that ‘…my body to be buryed in the pisshe church of Dodington in the chapell of seynt Kateryn in the north side. Also I will that Elizabeth my wif have all my stuff of household and all my plate’. 4 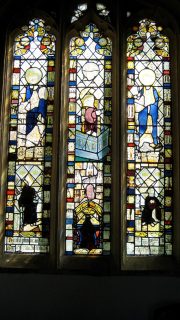 William is commemorated by a fine brass placed vertically over his and his wife Elizabeth’s tomb in the chapel. It depicts the kneeling couple (the upper half of William’s figure is missing) bordered by saints. The tomb and brass is illustrated in W. Lack, H. Martin Stuchfield and P. Whittemore, The Monumental Brasses of Huntingdonshire. 5 The antiquarian William Camden in his Visitation of Huntingdonshire (1613) also illustrated an engraving of William and Elizabeth in the glazing of the now blocked chapel east window. 6 They are clad in elaborate heraldic tabards, facing each other over a small draped altar and are accompanied by a Latin inscription with the date 1505. In the three-light south window, amongst numerous fragments, are the figures of two female saints, the head of St James the Greater, the Resurrection and a kneeling couple, presumably representing other members of the Taylard family (Fig. 3). St Katherine, whose head was created in 1969 as part of the conservation programme on the glazing carried out by G. King and Son of Norwich, is identified by her wheel of martyrdom and letter K in the borders framing the image. Although her companion does not have an attribute, her identity as St Margaret is confirmed by the M motif in the borders.

2. William Taylard’s will also included a clause requesting the Wardens of the Fraternity of Our Lady in nearby Buckden to put the proceeds from the lands which he had acquired in that parish towards the costs of keeping his yearly obit on the Feast of the Transfiguration (6th August). This feast was introduced in some English Benedictine and Augustinian monasteries by the beginning of the fifteenth century and during the course of the century its observance became widespread, if not universally observed in the parishes. 7