A Plague Image Considered in Lockdown

Almost as quickly as the Coronavirus spread from China to the countries of Europe, the USA, and the rest of the world, conspiracy theories surfaced that attempted to ‘explain’ the pandemic. One of these, as fatalistic as it is dangerous, is the idea that Covid-19 is a message from an enraged God who is punishing us for our many transgressions. This idea of a grimly wrathful God who punishes us, bringing illness and death, is not a new one. Yet its ancient pedigree does not make the idea any the less dangerous, even though it can render more readily comprehensible humanity’s deeply rooted, primal fear of any danger that is hard to grasp rationally. The idea, rooted in biblical texts, was prevalent in the Middle Ages, but it reaches beyond that into Graeco-Roman antiquity, and can even be traced back to the evolved civilizations of earlier periods. Associated with this idea is that of the arrow as the weapon that inflicts the disease, a visual motif found from pre-Christian times onwards.1 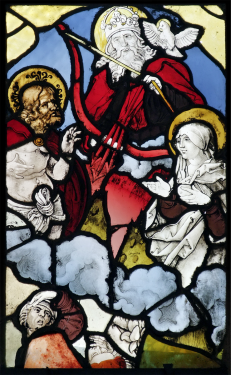 One representation, which is apparently unique in the medium of stained glass, in the Tetzel Chapel of the former Benedictine abbey of St Giles in Nuremberg, needs to be understood in this context (Fig. 1). In a cut-down, portrait-format panel it shows (above, in heaven) God the Father, accompanied by the Dove of the Holy Spirit, about to fire off three arrows with his bow, with (in front of him, also in heaven) Christ and Mary as intercessors, with Christ indicating the wound in his side to God the Father and Mary exposing her left breast, and (below) two men attempting to protect themselves from the arrows.

Leaving aside the brief mentions of the stained glass in the Tetzel Chapel as they have come down to us in the nineteenth-century literature, this panel was described in a more detailed manner for the first time in 1907, by Johannes Schinnerer, although the author did not know how to categorize the scene from an iconographic perspective.2 Karl-Adolf Knappe was the first to provide an accurate description of the subject matter, in 1960, as ”Christ and Mary as intercessors before God the Father, who is shooting plague arrows”, thereby identifying it as a representation that takes as its theme, in equal measure, the spread of the disease and protection from it.3 Gottfried Frenzel likewise designated it a “combination of intercession and plague images”.4

According to Hartmut Scholz, the panel was designed by Hans Süss von Kulmbach, and executed by the workshop of Veit Hirsvogel the Elder, dated to c.1510 or 1510–15.5 However, in discussions of the attribution and dating of this glass-painting’s design and execution, scant attention has been paid to investigating the image’s subject matter. Scholz only mentions, following Stephan Beissel, a woodcut of 1460–70 (Fig. 2) that may have “been a source of stimulus”.6 If we follow the classification of intercessory images drawn up by Dieter Koepplin, then our glass-painting falls into the category of “joint intercession before a wrathful God the Father” and should be designated a ‘plague image’.7 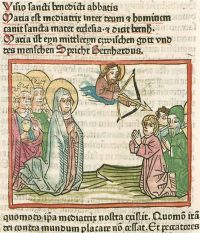 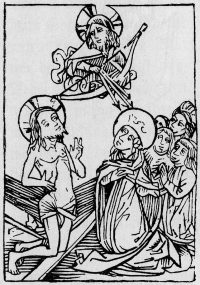 Koepplin says: “In this common image we are dealing with a distillation of the illustrations to three chapters of the Speculum humanae salvationis” (cap. 37–39),8 in which Maria is shown first as mediator (Maria mediatrix, Fig. 3), then as the Virgin of the Protective Cloak type (as advocate and protectress, Maria defensatrix et protectrix), and finally Christ is shown with the stigmata as mediator before God the Father. The anonymous woodcut of 1460–70 (Fig. 2) constitutes one such ‘distillation’, and it is perhaps not coincidence that it was produced at around the same period as the earliest edition of the Speculum printed with moveable type and provided with woodcuts.9 In the Speculum – that is, in the version compiled by one Brother John at the Benedictine abbey of Sts Ulrich and Afra in Augsburg – the image of Maria mediatrix interceding in the company of two other saints on behalf of a humanity threatened by an arrow from God the Father is entitled Visio sancti benedicti abbatis (‘The Vision of St Benedict, Abbot’), thereby demonstrating that this visual conception was also found in a Benedictine context (Fig. 3). 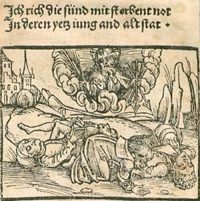 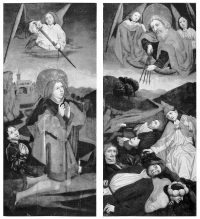 Although all these representations point forwards to the glass-painting in the Tetzel Chapel to a greater or lesser extent, one fundamental detail in the panel’s composition cannot be traced back to them: the direct juxtaposition of God the Father and the humanity that he threatens. A juxtaposition of this nature is found in panel painting, for example on the outsides of the retable wings by the workshop of the Augsburg Master of the Ulrich Legend, which apparently appeared at auction in 1937 in Munich, at the Adolf Weinmüller art auction house, but which cannot be traced today (Fig. 4).10 Note should also be made of Ein tractat contra pestem (‘A Treatise Against the Plague’), a work by Heinrich Laufenberg (d.1460) published in Strasbourg by Bartholomäus Kistler in 1500, which, in fact, in one of its illustrations shows exactly the same scene, with God the Father, armed with arrows, delivering disaster to mankind, accompanied by the lines:  “Ich rich[t] die sünd mit sterbent not / In deren yetz iung and alt stat” (‘The judgement I pass is the misery of death in which young and old are now embroiled.’) (Fig. 5).11 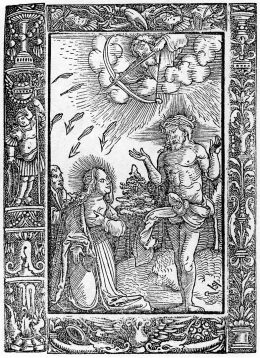 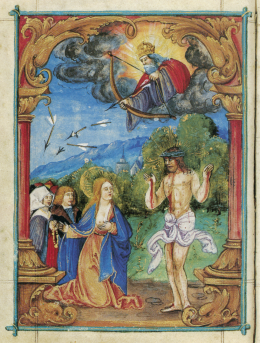 Lastly, two works that slightly post-date our panel make it possible to suggest that the glass can be incorporated into the iconographic/compositional line of development sketched out here. For a start there is a woodcut by Hans Schäufelein (Schäufelin) that appeared in the 1513 Augsburg devotional work known as the Via felicitatis: Maria kneels, her breast exposed, on the left; Christ stands as Man of Sorrows, on the right; and above them God the Father appears in heaven, vigorously shooting arrows (which break in flight) at a man who seeks shelter by hiding behind Maria (Fig. 6).12 Schäufelein’s woodcut served in turn as the model for the opening illumination in the prayer book made for Jakob Sattler and his wife Anna (née Rotmund) (Fig. 7). The manuscript has been attributed to the illuminator Nikolaus Glockendon, who was active in Nuremberg, and dated to c.1520. Here the image, which has been slightly modified from that in the woodcut and expanded with an architectural frame, appears in association with various prayers, including a “Gepet […] wider die pestilenz” (‘Prayer […] against the plague’) (fols 7r–8v).13 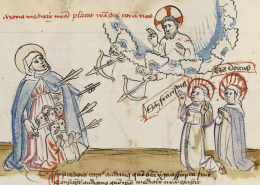 If we are to benefit from these observations in relation to the glass-painting, our next question is whether the Tetzel Chapel of the former Benedictine abbey of St Giles can be the panel’s original location. The chapel was constructed as a burial place for the Tetzel family around the middle of the fourteenth century and dedicated to the Virgin.14 As noted, records of its stained glass reach back to the middle of the nineteenth century, but it is only the 1907 description by Johannes Schinnerer that enables us to ascertain a location for the plague-image panel, in the south-west window of the chapel. Because at that time it was installed in this location together with the three stylistically dissimilar panels with which it is now assembled in the chapel’s axial window, the south-west window, the glass’s earliest demonstrable location, was not necessarily its original location. In fact, Gottfried Frenzel surmised that it originally came from the abbey church’s predecessor, which burnt down in 1696,15 but this was just pure speculation for which there are no grounds; in short, the question as to the panel’s original location remains unresolved.

How sophisticated! The ineluctability of God’s anger is matched – so we are promised – by the safety found in the care of Maria as advocate before Christ, God’s son (Fig. 8). But how effective would this be against Covid-19, given the need for social distancing (currently at 2m in the United Kingdom)? Would it really be wise to hope for protection from divine germ warfare beneath Maria’s cloak, where it would be as crowded as an après-ski in Ischgl?16

I am very grateful to Dr Joseph Spooner in London for translating this article. The German version was published on the website of the German Corpus Vitrearum (www.corpusvitrearum.de) on 2.6.2020 (urn:nbn:de:0238-2020060206).