My review copy of this book appeared on the doorstep after two months of lockdown, a welcome arrival at a time when our prospects and horizons seemed to be growing ever more limited. Here was a big, handsome, wide-ranging anthology of essays about medieval glass, international in flavour, written by people whose work I admire, and unconstrained by any thematic, chronological or geographic focus.

The editors, Elizabeth Pastan and Brigitte Kurmann-Schwarz, have wisely kept the scope of the volume broad, deciding to give voice to ”scholars doing interesting work in stained glass” and seeking contributions which reflect the diversity of approaches to the medium. In their helpful and intelligent introduction, they express their hope that the volume will provide compelling new material for students and that it will encourage scholarly exchange among those working in different aspects of stained glass studies, as well as in related fields. The range of material is admirably varied, embracing aspects of window design, production, patronage and reception in countries throughout the medieval period and beyond. And the book is properly international in authorship and outlook, its 26 contributors originating from – and their subjects encompassing – many parts of Europe and North America. 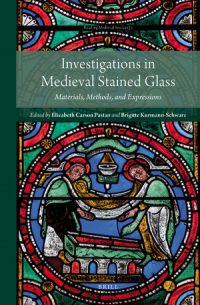 These divisions are helpful, not least because they support easier navigation around a large volume with multiple sets of plates. But this is such a strong collection that there are other resonances between articles, connections which extend throughout the book and stimulate reflection on many themes. For example, Hartmut Scholz’s excellent essay takes us to the prosperous cities of Southern Germany at the end of Middle Ages, and uses a rich array of visual material to assess the complex and nuanced relationships between high status patrons, graphic designers (including artists like Dürer and Holbein the Elder, prevalent in Nuremburg and Augsburg respectively) and glass-painters. As part of an extensive analysis of workshop practice, Scholz explores the extent to which skilled glass-painters, probably working from full-size cartoons, were able to replicate characteristics of the artists’ own work – and the degree to which they effectively collaborated on the designs. Similar questions are discussed by Nancy Thompson in relation to the work of Duccio (at Siena Cathedral) and Agnolo Gaddi (Florence Duomo) and the role of glass-painter Giovanni de Bonino at Orvieto. In her article on Chartres, Claudine Lautier discusses how workshops collaborated on the nave glazing, with glass-painters adopting primary and secondary roles for different commissions.  Meanwhile, David King’s work in Norwich – undertaken with only fragmentary survivals of glass but relatively plentiful documents, including property deeds – suggests that late-medieval glazing workshops were also producing brasses, painted screens and wall paintings. The flourishing cities described in Scholz’s and King’s articles are also reflected in the essays by Timothy Husband and Michel Hérold, both of whom consider new forms of glazing (roundels and lozenges, in particular) as a feature of an increasingly urbanised late medieval society, profuse with new sorts of secular buildings, civic and domestic.

The book contains several excellent survey pieces, produced by some of our most experienced stained glass scholars. Sarah Brown’s exemplary account of medieval glazing techniques is informed by consideration of the extensive historiography, recent re-evaluation of medieval treatises and the evidence provided by conservation science and practice. Francesca Dell’Acqua’s invaluable survey of the evidence for early window glass, and its evolution to include colour, paint and figural elements, brings together a very wide range of ancient documentary accounts and assesses them in the context of the archaeological evidence. Both articles, along with Meredith Lillich’s expert review of French grisaille, can be usefully read alongside Husband’s discussion of silver stain and the origins of roundel forms in grisaille schemes. Other surveys are complemented by case studies; Madeline Caviness’ thoughtful consideration of liturgy, iconography and design provides good context for Karine Boulanger’s piece on the integrated planning of the early thirteenth-century architectural and glazing schemes at Bourges and Claudine Lautier’s discussion of the relationship between stained glass windows and relics at Chartres.

Although the field of stained glass research is active and has generated many specialist publications in recent decades, general works on the subject are rare. Even rarer are general works which are international in scope, a critically important consideration, given the geo-political, cultural and economic contexts in which medieval stained glass was produced. This volume goes a long way to filling this void, a rich and useful collection of essays which is likely to remain relevant for years to come. The translation of non-English contributions into English (no mean feat) will help ensure the widest possible accessibility. Its individual contributions are generally of a high calibre, with excellent up-to-date bibliographies that acknowledge the enduring importance of nineteenth- and twentieth-century scholarship, while referencing the latest research. Their multiple perspectives are, in some respects, stronger than a single voice, allowing the exploration of connections and contrasts between different periods and places, demonstrating a wealth of investigative and analytical techniques, often developed in the face of elusive physical and documentary evidence and acknowledging the importance of holistic approaches to research. At a time when, perhaps more than ever, we feel the need for positive connections across the world, this book appears as a model of international collaboration. A timely publication indeed.