The West Window of Nantes Cathedral

The West Window of Nantes Cathedral 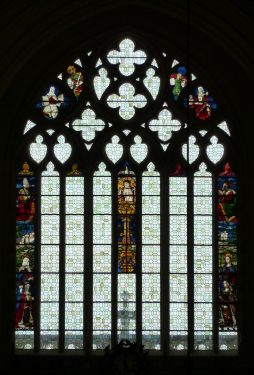 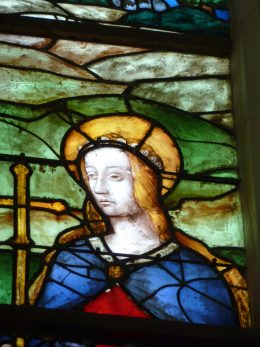 The window in the west façade of Nantes Cathedral fell victim to the fire that ravaged the building on 18 July 2020, perishing alongside the organ installed in front of it in 1620. The window was already in a fragmentary state, with four fifths of it having been destroyed in 1800 by the explosion of a gunpowder store in the neighbouring château; glass survived in the side lights and at the top of the central light, as well as in some of the tracery compartments, and the lost glass was replaced with plain glazing (Fig. 1).

The impressive, full-colour composition that originally filled the nine main lights and tracery of this large window (11m x 7m) was therefore nothing more than a memory when the glass was lost recently. Yet its importance was well known: the stained glass was one fruit of the patronage of Anne of Brittany, who was queen of France from 1491 to 1514, as she married, in succession, Charles VIII and Louis XII. Study of the window was taken up in 2011, within the framework of a university symposium, and allowed the various issues relating to this royal donation – its date, iconographic programme, and place of manufacture – to be clarified.

Noteworthy portions of the original work survived in situ, in quite a good state of preservation. In the lower corners, the position reserved for donors, were the kneeling figures of Anne of Brittany, crowned, and clothed with fleurs de lys (Fig. 2); and her mother Marguerite de Foix (d.1486), wife of Duke François II of Brittany, identified by her arms. Both were accompanied by their patron saints, Anne and Margaret (Fig. 3). Above them was a vast landscape filled with trees and buildings that separated them from figures of Moses and Elijah in clouds at the heads of the lights. The upper half of the central section of the window was filled with the remains of a huge representation of the Fountain of Life (Fig. 4), with a demi-figure of Christ surrounded by a radiating glory and emerging from a monumental golden basin with elegant Renaissance decoration that collected the blood flowing from his hands and side.

As with related works in all media illustrating the same theme,1 a red rivulet, running the height of the pedestal on which the basin was set, fed a second basin, which must have occupied the whole of the lower portion of the window, with images of sinners pardoned thanks to the powers of the Holy Blood, Adam and Eve, Mary Magdalene, etc. The surviving glass in the tracery consisted of two female figures with attributes, perhaps allegories or, more probably, sibyls, and an angel bearing instruments of the Passion.

The window has generally been dated to the 1490s, but one of the tracery compartments had the chronogram ‘MD…II’, so either ‘MDVII’ or ‘MDVIII’. This date, which coincides with the completion of the western arm of the cathedral in 1508, provides confirmation of the window’s chronology. Its commission appears to be linked to the installation in 1507, in the Carmelite church in Nantes, of the sumptuous tomb for the queen’s parents, executed for the queen by the architect Jean Perréal and the sculptor Michel Colombe (the tomb was relocated to the cathedral’s transept in 1817). In a lavish ceremony that took place on 25 May 1507, Anne of Brittany had Marguerite de Foix’s coffin, which had for thirty years been in the choir of the cathedral, translated to the Carmelite church.

Was it perhaps in memory of her mother that the queen decided to donate to the cathedral an ex voto that commemorated the duchess in a portrait? This seems likely, in so far as the window was imbued with a specific meaning that has been lost on account of the considerable lacunae in the glazing. Going by the remains of the scheme that were in place before the fire, the Fountain of Life theme, which was usually endowed with penitential and eucharistic symbolism, was a suitable vehicle for another message, linked with the office for the dead. The iconography was clearly inspired by the ‘Dies irae’ (‘Day of wrath’) sequence, a poem included in the twelfth century in the corpus of works ascribed to Gregory the Great, which is found, unchanged, in modern editions of the Mass for the Dead. In it, Christ is called the ‘Fons pietatis’ (‘Fount of mercy’) – see the eighth strophe ‘Rex tremendae majestatis, qui salvandos salvas gratis, salva me, Fons pietatis’ (‘King of awesome majesty, who gladly saves those to be saved, save me, fount of mercy’). Several of the sequence’s strophes evoke figures that survived in the Nantes glazing, as well as the absolved sinners in the lower third that had disappeared earlier. The opening of the poem, ‘Dies irae, dies illa solvet saeclum in favilla, teste David cum Sibylla’ (‘The day of wrath, that day will consume the world in ashes, as was prophesied by David and the Sibyl’), explains the unusual inclusion of prophet and probable sibyl figures in such a scene.

This context above all offers a justification for the very unusual representation of Christ, chosen here instead of the Calvary scene otherwise found in Fountain of Life scenes in the French tradition, or the bleeding Man of Sorrows, the dramatic vision favoured in Germanic art. What we had here was the apparition of the Saviour in majesty at his great return at the end of time, which explained the serenity of his countenance. The Mass for the Dead programme rendered permanent by this image was evidently designed by learned theologians. As a visual transcription of the prayer for the repose of the souls of the dead, the window besought Marguerite de Foix’s salvation.

The glazing was attributed, without foundation, to Pierre de La Chasse of Nantes, glazier and illuminator to the duke of Brittany in 1486–87, who was still active in 1518 according to archival sources. But the cultural context in which such an exceptional window may have been conceived tempts one to propose the hypothesis that the glazing was executed in and exported from Tours, capital of the Loire Valley, where the Fountain of Life theme appeared frequently around 1500.2 A Tours provenance finds confirmation in the quality of the window’s style perceptible, for example, in the noble figure of St Margaret, and the skill with which it was executed. Until the 1520s, artists who regularly fulfilled court commissions from the reign of Charles VIII onwards – the painters Jean Poyer and Jean Bourdichon (the illuminators of Anne of Brittany’s most luxurious books), and Jean Perréal and Michel Colombe, the makers of Anne’s parents’ tomb – were gathered in Tours. The consistency of these observations with one another allows us to conclude that in this dynamic artistic community the queen found both the designer for the cartoons for this window– perhaps a painter from the circle of Jean Poyer – and the studio that executed the glazing. The output of this studio, traces of which survive in Tours province, is also seen in a window exported outside the area: the brilliant north rose donated to Sens Cathedral c.1517 by the dean of chapter Gabriel Gouffier. Stylistic and technical similarities link it closely to the royal window at Nantes.

This window is of major interest for the history of art, and it is hoped that the remaining fragments, found on the ground after the fire, will be displayed in the Musée Dobrée in Nantes.