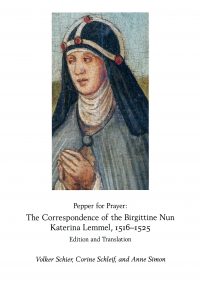 Pepper for Prayer: The Correspondence of the Birgittine Nun Katerina Lemmel, 1516–1525. Edited and translated by Volker Schier, Corine Schleif, and Anne Simon

Pepper for Prayer provides the first complete and unredacted edition and translation of a collection of correspondence known as the Lemmel letters, which provided the basis for the 2009 publication Katerina’s Windows: Donation and Devotion, Art and Music As Heard and Seen Through the Writings of a Birgittine Nun by Corine Schleif and Volker Schier (reviewed in Vidimus Issue 36 (January 2010). As readers familiar with Katerina’s Windows will know, these letters offer a rare glimpse into sixteenth-century German society, including the commissioning of devotional stained glass.

The correspondent, Katerina Imhoff (1466-1533), was born in Nuremburg to a wealthy patrician family, whose famous family firm, the Imhoff Trading Company, traded internationally in metal goods and spices. At eighteen, she married Michel Lemmel, a nobleman from Bamberg whose family also dealt in metal, as well as wine. Katerina was a successful businesswoman in her own right, managing her own diverse and lucrative portfolio. However, in 1516, three years after the death of Michel and against the advice of her family, she entered the Birgittine monastery of Maria Mai, where she remained until her death in 1533. As Maria Mai was around eighty kilometres from Nuremburg, Katerina maintained contact with her family almost exclusively through letters, despite the frequent unreliability of this channel of communication. Katerina’s dependence upon written correspondence means that the letters cover a diverse range of topics, painting a richly evocative picture of both Katerina herself, and the society she lived in. Beyond the formulaic opening and closing sentences, her letters are relatively unstructured, flowing in a stream of consciousness that evokes her voice and almost gives the reader the impression of being in conversation with Katerina herself.

Most of the letters contained in this publication are those written by Katerina between 1516 and 1522 to her cousin Hans V Imhoff, an executive of the family company, banker and member of the inner chamber of the Nuremburg city council. While references in these letters indicate that Katerina communicated frequently with other members of her family and friends, very little of this correspondence is known to survive. However, a flavour of these lost conversations is gained from seven surviving letters that are included in this edition: four from Katerina to other members of her family, two from abbesses of Maria Mai to Hans V, and a letter to Katerina from another family member, Christoph Fürer. 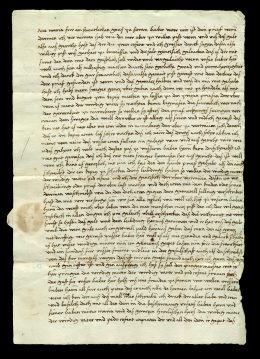 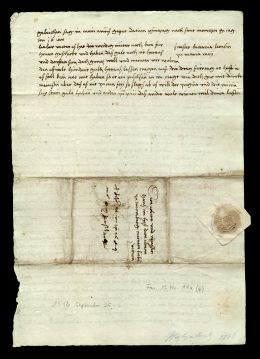 Pepper for Prayer, which is published in Runica et Mediævalia’s series of medieval text editions, makes Katerina’s correspondence readily accessible to scholars and casual readers alike. The introduction provides explanatory notes on the orthography, transcription and translation of the letters, as well as a brief but informative overview of the context within which they were created, highlighting key aspects of their significance as source material. Codicological analysis, along with discussions of genre and style, further contextualise the letters and demonstrate how insights into Katerina’s personality, as well as her world, can be gained from studying her correspondence. The letters (figs. 1 & 2), and facets of the world they contain, are brought to life by well-chosen illustrations, such as the New Year’s greeting woodcut of a similar type to those sent by the abbesses of Maria Mai to Hans V, and the beautifully illuminated manuscripts containing the rule of St Birgitta, and the prayers and songs sung by the nuns.

Transcriptions of the original letters are presented, in chronological order, alongside modern English translations, which are carefully laid out on the facing pages, making them easily accessible. Footnotes on the translation of unusual words are included beneath the transcription, but the texts otherwise lack annotation or explanation. In Katerina’s Windows, the letters were presented in translation, accompanied by critical commentary, along with a wider range of documentary sources through which Katerina’s life, and contemporary art, music and religion, were explored. In Pepper for Prayer, family members who feature prominently, such as Hans V Imhoff, are identified in the introduction, and genealogical tables enable other key figures to be identified, but the extensive commentary of the earlier publication is not duplicated. This means that readers will need to refer to Katerina’s Windows when seeking detailed contextual information or critical analysis regarding specific individuals or events referred to within the letters. The ease of cross-referencing between the two publications is greatly aided by the consistent labelling of the letters, while the extensive indexes enable readers to locate specific topics in both volumes with ease. As well as making Pepper for Prayer smaller, and therefore easier to hold and read, the lack of commentary allows the letters to be read without interruption, bringing the flow of events to the forefront and drawing the reader into Katerina’s life.

Naturally, those interested in stained glass will seek out Katerina’s comments regarding the commissioning of stained-glass windows for the cloister she built at Maria Mai. From her first suggestion to Hans V that he and her family have the windows made, Katerina’s efforts to persuade her relatives of the benefits of donating stained glass, and her discussion of the design and production processes, provide unparalleled insights into the commissioning of devotional and commemorative schemes in the early sixteenth century. In contrast to the functional, and often dry, language of other surviving records, such as contracts, Katerina’s letters reveal the emotional and devotional motives of stained glass commissioners. She explicitly states her preference that her family and friends, rather than “strangers”, contribute to the windows, so that they will be remembered, and prayed for, regularly. These comments also demonstrate the important function of heraldic devices as proxies for individuals, to ensure their commemoration.

From the outset, she articulates her desire for a display that is modest, yet “devotional and expressive”,1 and her frustrations with contemporary stained glass seem rooted in this desire for humble expressions of piety: “Today they cannot paint – the saints and the good characters must have sinful tailored clothing, which does not stimulate much pious contemplation”.2 Her attempts to communicate her wishes to her cousin and Veit Hirsvogel, the master glazier who created the windows, along with her later expressions of disappointment in the contemporary style of the glass painting, reveal her belief of the need for intense colour and graphic imagery to ensure the emotional and devotional power of images, in this case, of Christ’s Passion. Here, as elsewhere, the opportunity to read the original text alongside the translation enables the nuances of Katerina’s language to be understood; as the editors’ observe, the adjective “senlich”,3 which she uses repeatedly, is more evocative of heartfelt devotion that she wishes to elicit, than can be grasped solely from the modern translation.

Katerina also reveals some of the practical considerations discussed during commissioning, such as the need for sufficient light within the cloister, so that the nuns can read their books as they process through the cloister, singing, and the choice of metal frames for durability. Her awareness of production techniques is evident from her concerns about the shade of yellow achieved in the shields and the remarkable instruction that the “red on the shield should be etched; otherwise it won’t last when exposed to the weather”. Sadly, the windows have not endured as an “eternal memorial”,4 as Katerina hoped. Yet, the survival of other Imhoff commissions made by the Hirsvogel workshop enables us to catch a glimpse of how the lost glass may have looked (fig. 3).

Although her family members funded the windows, the letters indicate that Katerina selected the figural iconography, determined the narrative sequence and chose which scenes her relatives’ arms would accompany. Throughout her descriptions and discussions, Katerina’s knowledge and authority over the glazing commissions is evident, and the value of hearing this confident, articulate female voice cannot be understated. Her agency as a commissioner provides rare evidence of the roles sixteenth-century women of her status could play in business, and their ability to commission art and architecture. 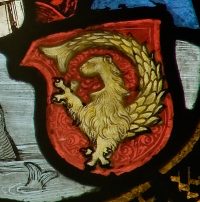 Indeed, this publication holds significance for many fields, not just stained glass. Closing the introduction with an explanation of their aims, the editors describe the careful balancing acts involved in editing and translating the texts, as well as expressing their hope that this painstaking work will enable scholars from a wider range of disciplines to benefit from this unparalleled documentary resource.

This publication undoubtedly achieves this aim. Readers can now access the plethora of material in Katerina’s letters that can support studies in other disciplines, particularly within social and economic history, including banking, communication, transport, medicine and food. Even those interested primarily in glass cannot help but be captivated by Katerina’s world. Across the letters, we catch glimpses of the society she has secluded herself from, as well as the new world that she inhabits. Her frequent requests for spices, including the pepper of the title, and other supplies reveal daily life in the monastery. Yet the inescapability of the wider world is also apparent, as external events make their impact felt upon Katerina’s community. In the present climate, one cannot help but draw parallels and take lessons from the letters. The impact of environmental disasters upon both property and crops feels distinctly relevant in the shadow of the looming climate crisis. Meanwhile, the difficulties in ensuring letters, supplies and money are delivered safely are a reminder of how lucky we are to live in a world where barriers to communication are greatly reduced, especially under current travel restrictions.

Like Katerina, we are living in turbulent times. The final letter in the volume, from December 1525, was not written by Katerina, but Christoph Fürer. As the Reformation gathered pace, and following an attack on Maria Mai, Christoph urged Katerina to leave the monastery and return to Nuremburg. He questions the validity of her way of life with compassion, but his words are a sobering reminder of the changing world. No record of Katerina’s answer survives, but she remained at Maria Mai until her death eight years later. It seems that she was determined to continue on the path she had chosen for herself, a decision which should not surprise any readers of her letters.

After immersing myself in Katerina’s world, it seems only proper to follow the editors by signing off with Katerina’s own closing statement – jetz nichts mehr. Given on the Friday after the Day of St Simon and St Jude in the 20th year.