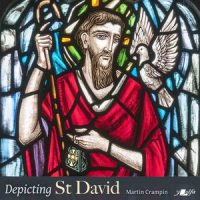 St David remains the most famous of the Welsh saints, and despite living in the early fifth or sixth century, as patron saint of Wales he is a much-celebrated national icon. This excellent little book begins by briefly outlining the main written sources describing the saint’s life, and the issues surrounding the roughly 500-year time gap between David’s death and the earliest accounts, most notably that written by Rhygyfarch of Llanbadarn.

Whilst little hard evidence survives, sources agree that he was a leading and influential figure in the early Welsh church, who travelled to preach, gaining him wider recognition. Martin Crampin provides a fascinating overview of the medieval cult of St David and how his popularity grew over time, including across parts of England, Ireland and Brittany.

Whilst many images of St David can be found in churches devoted to him across these areas, the largest concentration is naturally found within Wales itself. Hundreds of images survive, largely in stained glass, but also within other media. Hence, the book’s emphasis is largely on Welsh stained glass, whilst making useful comparisons to sculpture, paintings and other media. Originally intended to accompany an exhibition for St David’s Cathedral Festival, which was sadly cancelled due to Covid-19 restrictions, the book does away with chapters and instead flows quite naturally chronologically.

Unfortunately, few medieval depictions of St David survive. However, interesting examples are included of the incorporation of medieval fragments into what are otherwise nineteenth-century windows (Fig. 1). Focusing largely on stained glass of the nineteenth and twentieth centuries, the book explores the remarkable breadth of style and approach to the depiction of St David. A detailed examination of the evolution of imagery proves fascinating, revealing the impact of the denomination of the church on the choice of symbolism, as well as wider artistic trends or events. Perhaps most notable is the impact of the First World War, and the increased emphasis subsequently placed on St David as a national figure, particularly within memorial windows (Fig. 2). 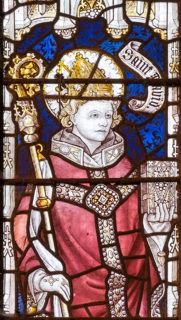 For Vidimus readers in particular, there is much of interest regarding the styles, techniques and processes in nineteenth- and twentieth-century studios, and many often-overlooked gems are highlighted. Crampin’s comprehensive knowledge, acquired from years of studying Welsh stained glass, is clear, and illuminates the context within which each window was made. His experience as a professional photographer is also greatly evident, and benefits the book in the liberal use of high-quality colour images. The widespread evidence of reuse or adaption of designs is fascinating, for instance the striking figure of St David by Shrigley and Hunt c.1907 in the Church of St Mary, Gladestry (Fig. 3). The same figure can be found two years later, with a different colour scheme and an alternative background, made by the same firm for the Chapel of St Thomas Becket, St David’s Cathedral.

Several of the churches mentioned have since closed, and an increasing number are at risk, so it is heartening to see that efforts have already been made, at least in some cases, to preserve the windows discussed by relocating them. By concluding with more recent scholarly and abstract interpretations of the saint, it is uplifting to see that, despite the perilous position of some churches in Wales, the desire to commission new artwork to celebrate the saint continues (Fig.4).

One of the aims of the book is to inspire more visitors to seek out these images of Wales’ patron saint, and as a celebration of many hitherto overlooked treasures it is very effective. There are many windows I certainly intend to seek out (when it is safe again to do so) and in many cases revisit with a new perspective thanks to this book.

In short, this is a glorious little book whose compact size does not make any concessions for quality of image or text. It is beautifully written and thoroughly researched, and nicely complements the author’s ‘Stained Glass in Welsh Churches’. For those left wanting to learn more there is a practical bibliography with plenty of useful pointers. It is highly accessible and there is plenty to delight a very wide spectrum of readers. Worth every penny. 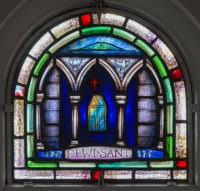