Fantasy or Reality. Stained glass secrets in the work of Jan van Eyck

In this exhibition, you are taking a walk with Jan van Eyck through his wonderful world of paintings. You enter a medieval space enchanted with the heavenly light coming through the stained glass windows. Details of the paintings show hidden stained glass windows, painted with saintly figures and decorative patterns. But does van Eyck depict reality? It is an intriguing question on which the exhibition ‘Fantasy or Reality’ in the Great Beguinage church in Ghent, Belgium, offers the very convincing answer: yes, he does! With his extraordinarily sharp eye, the painter observed existing stained glass windows and managed to depict these with exceptional precision. 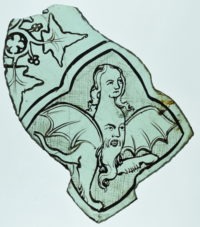 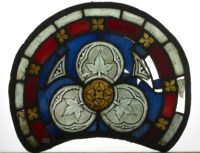 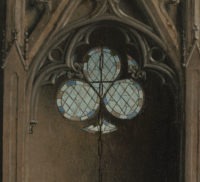 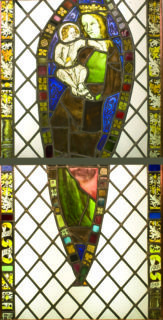 In Belgium, very few medieval windows can be found in their original setting, which makes it difficult to assess the reality of van Eyck’s observational abilities and supreme painting technique in the context of this medium. The most famous in-situ Flemish medieval windows are the Calvary window of the Saint Eustace church in Zichem (1391), the Coronation window of the church of Saint Gummarus in Lier (ca. 1475), and a few 15th-century windows in the basilica of Halle and in Tournai Cathedral. Thanks to invasive restorations, these windows managed to survive the tumults of history. They are medieval masterpieces and can easily be classified on the same level as the work of the early Netherlandish painters.

More numerous, and just as historically important, are the many medieval glass fragments recovered through archaeological digs, often hidden behind bricked-up windows. These fragments are mostly hidden in art depots but are now, exceptionally, displayed to the public in this exhibition. These pieces paint a wider picture of the traditional applications of the medieval stained glass window as a necessary barrier from the elements.

Since glass was such a valuable material, it was usually reused. The large medieval glass find in Ghent (1982) was thus most exceptional. More than 2000 fragments surfaced amongst the gravel found on the vaults of the Dominican cloister, located in Onderbergen, during the restoration of the building. Fortunately, the importance of these rather small pieces of glass was quickly noticed by the workmen on site and the designated art-historian Guido-Jan Bral. The funny marginalia painted on these fragments most likely caught their attention (Fig. 1). Research showed that the glass fragments came from two 13th or 14th-century stained glass windows of the monastery church, which were bricked up in 1474 when the construction of a new monastery wing began.1 Parts of the glass had then been dumped on the vaults of the adjacent monastery building. The church itself was demolished in 1860, during which two smaller round stained-glass windows were recovered. They are kept in the Ghent city museum (STAM) and one of them can be seen in this exhibition (Fig. 2). It is of particular value that they still retain their original medieval lead net.

Aletta Rambaut, stained glass art historian and curator of the exhibition, uses this intriguing archaeological material to connect van Eyck’s work to reality. For example, the small round windows from the former Dominican Church show strong similarities with the window depicted behind the wash basin on one of the outer panels of the Ghent Altarpiece (Fig. 3). The fact that the painter managed to depict mending leads, almost invisible to the naked eye, is not only admirable but also astonishing. Was this perhaps van Eyck’s way to get to grips with reality by presenting it with unsurpassed precision after meticulous observation?

Art-historical research on the depiction of stained glass in paintings from the 15th century is in itself rather exceptional. In 1989 Eva Frodl-Kraft (Corpus Vitrearum Austria) published  ‘Das Bildfenster im Bild. Glasmalereien in den Interieurs der frühen Niederländer’.2 It was the Ghentian glass find from a few years earlier that inspired her. She demonstrated just how valuable the early Netherlandish painters can be for the study of medieval stained glass. The current exhibition in the Great Beguinage church ties in seamlessly with her work. By connecting real artifacts to the stained glass windows depicted in van Eyck’s work, the exhibition confirms that the paintings are indeed a relevant iconographic source for the architectural and art-historical research of historical interiors and medieval stained glass.

An eye-catcher is undoubtedly van Eyck’s Annunciation (National Gallery Washington) showing a wide variety of stained glass windows including all of the structural details, such as the commonly found crown glass windows, as well as colourless, quarried glass panels, often with the traditional coloured borders made out of blue, red, or yellow glass. The most exceptional window can be found high in the choir apse depicted in the painting.  The arched window opening is filled with a quarried panel containing a male figure placed in front of a blue mandorla with the inscription ‘Asia’ (Fig. 4).  For the iconographical explanation of this figure, we refer to the small, but most informative, booklet accompanying the exhibition.3

The framing of holy figures in mandorlas did indeed occur in stained glass. The highly exceptional medieval panel depicting the Virgin and Child from ca. 1350-1400 proves this, as the figures are also set within a mandorla (Fig. 5). The panel is legally protected by the Flemish Government since 2018 and resides in the art reserves of the M-Museum in Leuven. The panel was discovered above the 17th-century vaults of the beguinage church in Leuven when the church was undergoing restoration works in 1855.  Jean-Baptiste Bethune (1821-1894), key figure in the Belgian neo-gothic movement, knew of the discovery and made a drawing of the panel. The drawing is now preserved in the Stichting Bethune in Marke, and a copy can be seen in the exhibition.

Through the figure of Bethune and the drawing, the link is also made with the location of the exhibition. The impressive neo-gothic beguinage church of Sint-Amandsberg was designed by Bethune, the 200th anniversary of whose birth will be celebrated in 2021.

In addition to the window glass, several glass objects are also presented. These medieval bottles, cups and drinking glasses show in the same way as the medieval stained glass windows, how meticulously and realistically van Eyck painted his work.

Gino Bulcke’s scenography of the exhibition fits perfectly in the neo-Gothic interior of the church, where the stained glass windows of the ‘Bethunians’ Arthur Verhaegen, Joseph Casier and Joseph Osterrath echo the windows depicted in van Eyck’s paintings. By confronting van Eyck’s work with preserved artefacts, Rambaut succeeds in captivating both the specialists and the general public with the topic of ‘monumental stained glass in the late Middle Ages,’ a wonderful initiative of the v.z.w. Sinte-Elisabeth Begijnhof in Sint-Amandsberg.

The exhibition can be visited free of charge after online reservation (click here to book).

The 200th anniversary of Jean-Baptiste Bethune’s birth is celebrated in the Openbaar Kunst Bezit Publication Special of April-May 2021 (59, number 2). There are contributions on the stained glass workshop of Bethune (by Aletta Rambaut), and on the Great Beguinage church (by Jan De Maeyer).