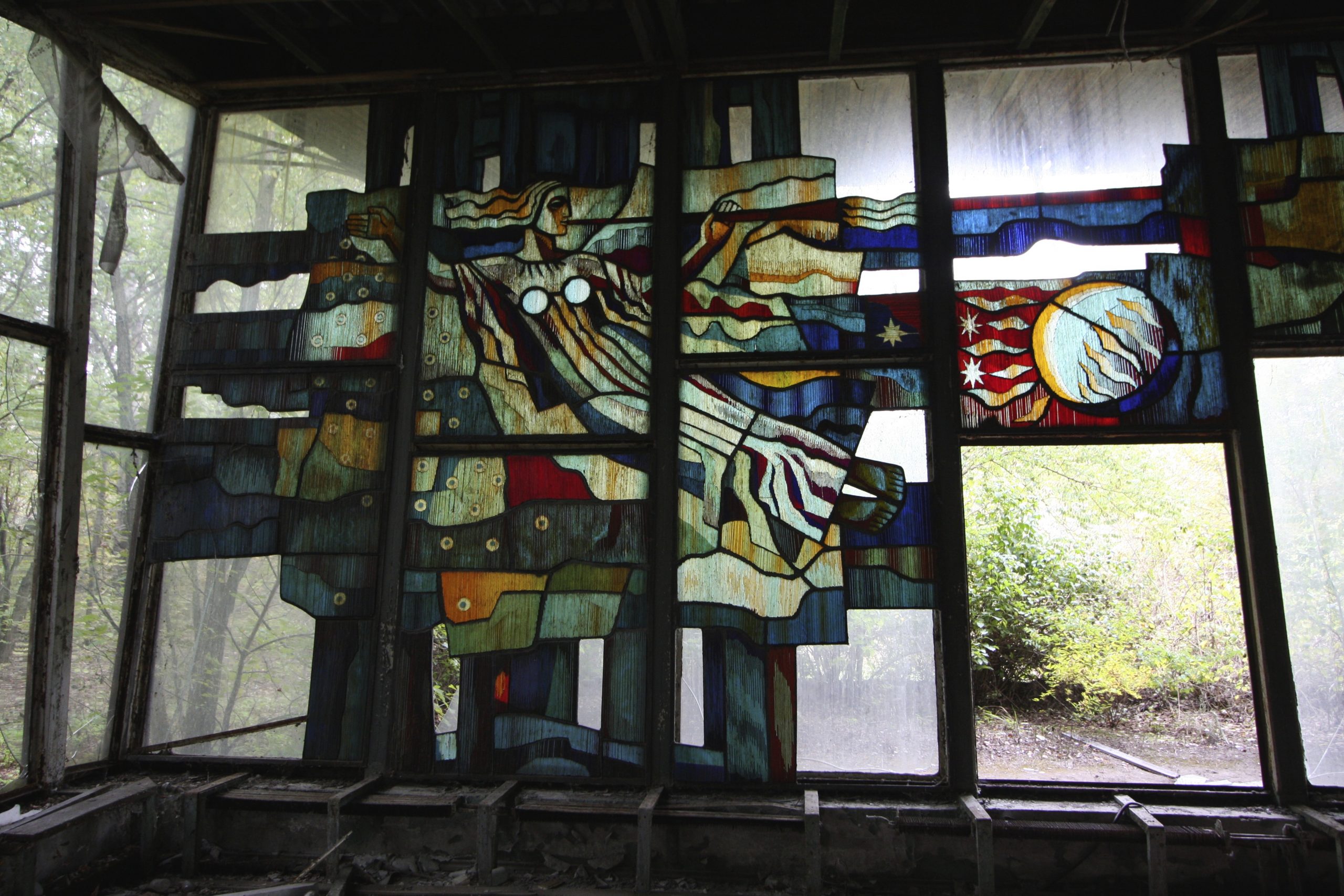 On 19 April 2022 the Worshipful Company of Glaziers in London hosted an extremely successful fundraising webinar led by Dr Oksana Kondratyeva who introduced an international audience of over 200 to the stained glass of her native Ukraine. Dr Kondratyeva’s lecture, reflecting fieldwork and research undertaken with the support of a Glaziers’ Company Arthur and Helen David travelling fellowship in 2016, was a poignant exploration of cities and sites whose names have been made all too familiar to her audience through news of the Russian invasion. While the riches of the churches of Lviv, many of them protected in situ, are relatively distant from the front lines of the conflict, the fate of stained glass in cities like Kharkiv remains uncertain. In 2016 Oksana was able to celebrate the remarkable survival of Mykola S. Linnyk’s 1986 scheme on the history of energy in the administrative buildings of the Chernobyl nuclear plant (Fig. 1), installed only three days before the World’s worst nuclear disaster. It may be wondered whether the scheme has also survived the recent Russian occupation of the site. Copies of Oksana’s article ‘New Light on Ukrainian stained glass’, Journal of Stained Glass XL (2016), 18–42, may be bought for £5.00 via the website of the British Society of Master Glass Painters, with all proceeds going to Ukrainian humanitarian relief.

Additional information on the history of Ukrainian stained glass can also be found on the website of the International Corpus Vitrearum, where Vidimus readers will also find guidance notes on the emergency protection of stained glass in wartime, drafted by Dr Ivo Rauch and a small working party of the ICOMOS/Corpus Vitrearum’s International Scientific Committee for the Conservation of Stained Glass. The documents, in Ukrainian and English, drafted at the request of the ICOMOS Emergency Monitoring and Response Working Group, can be downloaded.

The Institute for Conservation has collated numerous useful links to initiatives to help protect and care for cultural herniate in Ukraine: https://www.icon.org.uk/resource/support-for-ukraine-conserving-cultural-heritage.html

Proposed Ban on the Use of Lead 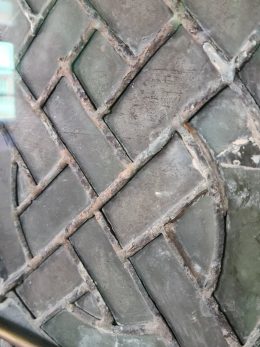 A threat to the manufacture, use, handling, storage and display of lead is posed by the European Chemicals Agency (ECHA). It is driven by the Agency’s statutory remit to remove from the public realm all chemicals and materials injurious to public health. An online consultation on this matter opened in February 2022 and closed on 2 May.

While not imminent (there will be several stages in a consultative process involving the ECHA, the European Commission and European Parliament), the addition of lead to Appendix IV (Authorisation List) of the REACH regulation would pose an existential threat to the fabrication, conservation, handling storage and display of stained glass, as well as to the making, conservation and display of many craft and heritage assets, including organs, the roofing and fixing of historic masonry in heritage buildings and the display, preservation and conservation of all lead-related artefacts held in museums and galleries. If implemented, these restrictions would have a crippling impact on all businesses, craftspeople, conservators and heritage institutions involved in the manufacture and use of lead, and not only in EU member countries. Stained glass makers and conservators in the UK and North America would inevitably suffer as members of a community in which international exchange and collaboration is inherent, and a decline in the international pool of expertise in design, scholarship, research and technical know-how in stained glass creation, history, fabrication and conservation might also be anticipated.

The ICOMOS/Corpus Vitrearum Scientific Committee for the Conservation of Stained Glass has submitted a joint statement on behalf of the stained glass and heritage communities, in partnership with ICOM, ICOM-Glass and ECCO. ICOMOS has also communicated with the relevant departments of the European Commission and the European Parliament. Similar statements have been submitted by the international secretariat of the Corpus Vitrearum and its sponsor, the Union Académique Internationale. Other institutions, including the Chambre Syndicale Nationale du Vitrail, ICON and the Deutschen Nationalkomitees für Denkmalschutz bei der Beauftragten der Bundesregierung für Kultur und Medien have also expressed their concern and have mobilised their own contacts.

We are also aware of interventions made by the European Council’s working group on culture and have been asked to supply information to the office of one of the Vice-Presidents of the European Parliament and to the All-Party Parliamentary Group on Craft in the UK. On the grounds that in the heritage context lead is an integral, irreplaceable and indispensable historic material, used in quantities that have negligible impact on the environment and with risks to health that are well understood and are well managed and mitigated through well-regulated safety practices and the use of appropriate PPE by practitioners and professionals in the field, we hope to secure an exemption from any regulation.

Vidimus readers are encouraged to disseminate information and encourage the engagement of their own network of contacts in order to ensure that the concerns of the heritage sector in general and the stained-glass community in particular are strongly represented.

The Centro Latinoamericano del Vitral (CLAV), based in Valparaíso (Chile) is dedicated to the study and protection of stained glass in Latin America. In 2020, twelve leading professionals in architecture, heritage and art history representing six countries, formed the International Group for the Study and Conservation of Stained Glass in Latin America (GIVAL). The group’s objective is to address the issues surrounding the study and conservation of stained glass on the continent, with the ultimate aim of achieving Latin American membership of the International Corpus Vitrearum. GIVAL is identifying different lines of research relevant to the Latin American context, and also strives for the professionalisation of the discipline in its Latin American member states. In the summer of 2022 sixteen GIVAL members are delivering a cycle of ten master classes aimed at cultural heritage professionals, architects, conservators and restorers, restoration technicians interested in specialising in the area of stained glass, among others. The contents cover areas of general interest: history of stained glass, case studies (in four Latin American countries), and contemporary glass creation, and will feature four city case studies (Valparaíso, Buenos Aires, Rio de Janeiro and Mexico City). The programme may also be of interest to artists, students, journalists specialising in culture, artisans and stained-glass artists, as well as the general public.

The ten sessions will be conducted live via the Zoom platform, thanks to the collaboration of the Adolfo Ibañez University, and will be broadcast simultaneously through CLAV’s cultural channel on YouTube.

For more information go to: http://www.centrolatinoamericanodelvitral.org/catedra-latinoamericana-del-vitral/