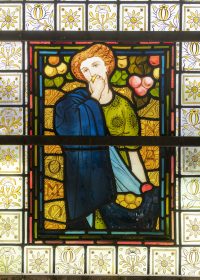 A prominent and highly successful figure in the Victorian Arts and Crafts and Gothic Revival on both sides of the Atlantic and in Australia, Daniel Cottier (1838-1891) is nevertheless rarely mentioned in the classic canon of this period and field. Max Donnelly and Petra Ten-Doesschate Chu’s sumptuously illustrated and beautifully written book, published with the high-quality standards typical of Yale University Press, seeks to address this with vigour and in-depth research. The chapters chart Cottier’s work and the locations of his studios from Scotland in his youth to Australia. He was a close contemporary of William Morris and Edward Burne-Jones (born in 1834 and 1833 respectively) and fully absorbed the wisdom as well as the limitations of the first generation of Pre-Raphaelites as he moved towards the Aesthetic Movement and House Beautiful styles. The Pre-Raphaelite artist Ford Madox Brown wrote, ‘Cottier as a colourist has a range of performance beyond that of any other modern artist.’1 Aestheticism as a movement encompassed a vast array of styles, and it was in their tasteful and indeed elitist combinative compositions that interiors, whether ecclesiastical, industrial, or domestic (Fig. 1), sang with success. The American critic Thorstein Veblen (1857–1929) noted that the style was calculated to publicly and prominently satisfy the patron’s ‘sense of pecuniary superiority.’2 This was just as true for the designer, whose education, experience, and intuition combined to make them a reliable source of insight and careful curation. Some were caustic – as was William Morris in his politics – about ‘measuring beautiful things by our money standard.’3

Eclectic in a range of designs, Cottier’s work alongside his many colleagues (both women and men, as this book highlights clearly) included painted decoration and furnishings for Cluny Castle Chapel in Aberdeenshire (1872), musical instruments, clocks, stained glass for both sacred and secular settings, and design techniques that infused modernity with historicism derived from multiple periods. At Links House, Montrose, in Scotland included a quintessentially 1870s fireplace with mirrors, coved panels containing sprigs of fruit and flowers, an alluring pink marble Classical frame, and tiles combining the blue and white aesthetic of Delft with images of birds and female allegories of Peace and Plenty.4 The golden sheen of his Gilded Tynecastle Tapestry wall covering, produced for the library of Sir George Verdon, chief of the English, Scottish and Australian Chartered Bank in Melbourne (Lyon, Wells, and Cottier & Co, 1887) were a particularly popular ‘novelty.’5

Despite receiving only a passing mention in comprehensive studies such as The Cult of Beauty exhibition at the Victoria and Albert Museum and no mention in Alec Hamilton’s account of Arts and Crafts churches, this new book demonstrates both the volume and significance of Cottier’s work.6 Cottier opened his first studio in Glasgow in 1864, and its success brought him to London by 1869 and then on to New York in the early 1870s. Above all, it was Cottier’s stained glass that sang with colour and vibrancy (Fig. 2). Raw anguish meets sumptuous beauty in ‘The Reaper and the Flowers’, a stained glass window for St John the Evangelist, Birtley. This memorial window depicts a girl being supported by an angel whose gaze of tenderness belies the sickle in its hand, the curve of the blade following the arc of the wing. It is accompanied by the poetic phrase, ‘I was an angel, visited the green earth, and took the flowers away.’ The proximity of youth and death is startling and melancholy in this innovative image. 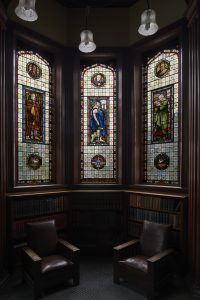 Trinity Church in Boston, designed by H. H. Richardson, presented a unique opportunity for Cottier to work collaboratively with John La Farge. There was significant confusion, however, about who did what. In Scribner’s Monthly, Clarence Cook wrote that ‘when all the panels, spandrels, and wall spaces shall have been filled…the obligation to Mr. Cottier will be more plain than ever.’ The sculptor Augustus Saint-Gaudens was less sure. He credited Cottier with mixing colours and the practical logistics of working at the site, but also said ‘there isn’t a bit of Cottier in the whole church. La Farge had every bit of Cottier’s work changed to suit himself.’7 The characteristic colours and composition of Cottier’s studio can certainly be seen in the Five Wise Virgins memorial window, completed in 1879 by Cottier’s London studio. In Links House, Montrose, windows representing the four seasons, accompanied by swallows, sparrows, and sunflowers, let light pour into the main staircase. The figures resonate with contemporaneous 1870s paintings by Albert Moore and Edward Burne-Jones, and there are similarities with the Morris and Company style, but none of Cottier’s work is derivative. That said, when accounting for why Cottier was so successful in his own time but now remembered somewhat rarely, Donnelly and Ten-Doesschate suggest that as Cottier died just when the Arts and Crafts movement began with all of its diversity and dynamism. Perhaps the somewhat formulaic style of the studio’s international output meant that they were less able to move with the times as designers such as Christopher Whall and Charles Rennie Mackintosh began to explore new approaches.

Like many of his contemporaries, Cottier was also interested in literary themes from Shakespeare and modern poetry. Two panels in the Metropolitan Museum of Art in New York depict The Lady of Shalott, inspired by a painting by Matthijs Maris. Over 25 years later, Cottier revisited the theme of women literary protagonists at Clayton, the Pittsburgh home of Henry Clay Frick. Four figures stand together on the landing: Miranda from The Tempest, Isabella from Keats’s poem of the same name, Alexandre Dumas’ heroine Marguerite, and Madeline from Keats’s ‘The Eve of St Agnes’. Miranda listens attentively to a shell on an isolated shore, Isabella looks mournful in an alcove near an acid-green plant, Marguerite tenderly plucks a petal from a white rose, and Madeline’s lamp burns brightly near her determined face. From Cottier’s prominent domestic projects to ecclesiastical commissions and civic interiors, each of the international studios’ designs tells a story. This new book has finally revealed the breadth and vision of their narratives.

Yale University Press is delighted to offer readers of Vidimus 30% off* Daniel Cottier: Designer, Decorator, Dealer. Order via our website (www.yalebooks.co.uk) and enter code Y2251 when prompted at checkout.