This elegantly designed and beautifully illustrated booklet published for the Friends of Canterbury Cathedral, a self-proclaimed ‘fan club’ (p.5), is an affordable delight. Intended for the general visitor, its slim size and easy-to-navigate layout will surely make it an attractive purchase for the visitor able to stand in front of the window itself, but it is also an engaging, informative and authoritative addition to the literature, overturning some long-held misapprehensions about the authenticity of the glass in window nV. This is the first of ten windows devoted to the miracles of Thomas Becket, murdered in 1170, canonised in 1173 and enshrined nearby in the Trinity Chapel, to which his relics had been translated in 1220. The text shares the extraordinary findings resulting from the new forensic examination of the window initiated in 2018 by Dr Rachel Koopmans, historian and Becket scholar, assisted by head of stained-glass conservation at Canterbury, Léonie Seliger, a project funded by the Friends. This collaboration between historian and conservator has borne rich fruit, as was first presented to Vidimus readers in January 2019. It builds upon Dr Koopman’s scholarly reevaluation of the textual sources for the miracle windows, in this case derived entirely from Benedict of Peterborough’s near-contemporary account of 1171–3. Combined with the detailed and meticulous examination of the glass, the authors establish that the window, created in the mid 1180s, but once dismissed as being a nineteenth-century fabrication, contains the very earliest depiction of pilgrims coming to Canterbury (Fig. 1), an image that Chaucer’s pilgrims would have seen two centuries later.

The window has not survived the centuries unscathed. Glass was lost early in the fifteenth century when a chantry was created for Henry IV and his queen. Two panels were removed to the great south window in 1792. In 1894 cathedral glazier Samuel Caldwell Sr created four new panels to replace the losses, weaving some medieval scraps into his work. Far more problematic was the 1919–20 work of Samuel Caldwell Jr, who retrieved the two relocated panels, but replaced many of the original heads, in some cases in ways that confused the narrative, using acid to antiquate the surfaces of modern pieces. The authors are very circumspect in their treatment of Caldwell Jr’s work! 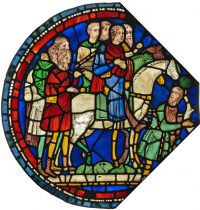 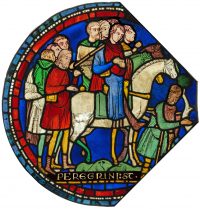 Fig. 2 Digital reconstruction of the Pilgrims panel, created by Léonie Seliger, using Adobe Photoshop™ software. The heads are derived from medieval glass elsewhere in the Trinity Chapel windows. The words ‘PEREGRINI ST’ (‘Pilgrims of the Saint’), could still be discerned in a raking light. Photo © The Chapter, Canterbury Cathedral.

The new research has not only rehabilitated a panel once dismissed as ‘modern’ but has also revealed the dynamic relationship between textual source and design. Insightful analysis of the medieval panels is complemented by a translation of the Latin inscriptions contained in the panels, some of them now barely legible. For two of the panels, the miracle of Stephen of Hoyland and the miracle of William, priest of London, the only beneficiary of a miracle to be named in the glass, a transcription and translation of Benedict’s twelfth-century narrative is given. Benedict’s account is characterised by the kind of honest detail that lends authenticity to his witness. We are told, for example, that William of London, the first to be healed by the blood-and-water relic, regained his speech through Becket’s miraculous intervention, but ‘at first less than perfectly; for when he was at Canterbury less was restored to him, but when he returned back, his speech was granted more fully’ (p.29).  Diagrams locate the panels within the window and indicate the extent of restoration. An interesting aspect of the book is the use of digital reconstruction to convey a more accurate impression of the panels’ original appearance (Fig. 2). Using details of heads and figures from elsewhere within the scheme, Seliger has restored the male head in the centre of the Stephen of Hoyland miracle (p.17), for example, as well as the lost second servant on the panel’s right-hand edge. Gendered assumptions made by Caldwell Jr, in his restoration of the central figure as a female servant, for example, as well as the absence of any female heads in the pilgrims’ panel, are also challenged, although in presenting these alternative interpretations, the authors are at pains to stress that ‘these reconstructions are offered as suggestions and should not be taken as fact’ (p. 34).

The prose is lucid and clear, as we have come to expect of Dr Koopmans, whose accessible style belies the depth and sophistication of her scholarship. The illustrations are of outstanding quality, although the restoration diagrams are a little heavy in appearance, with slightly pixelated outlines. It can only be hoped that this project will be extended to a re-examination of the other Miracle windows, with similarly attractive, accessible and affordable booklets to share the results of this fascinating research.