Reflecting fondly on my first finding of the Vidimus website nearly a decade ago, it is with enduring gratitude that I share this story of detective intrigue and establishing the crucial link between public information and private philanthropy. I am chronicling events that began prior to 2013, culminating in my 2016 donation of the 1565 silver-stained glass Habakkuk and The Angel by Wouter Crabeth (Fig. 1) to one of the world’s most visited museums: the Getty Center in Los Angeles, California. 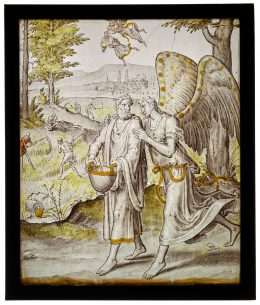 Having a considerable background in art history, but a limited knowledge of silver-stained glass (as I later found to be a rule, worldwide, among various scholars, conservators, and collectors), I sought the ever-vigilant eyes of one of the world’s finest auction houses for insight on a piece with an old family provenance, but no artist attribution or identification of medium – only the obvious word ‘glass’ in Italian (‘vetri’) scribbled on verso lining papers, in my grandfather’s hand. Sadly, the specialists I consulted – in Boston, New York, Washington, D.C., London, Munich, Los Angeles, and elsewhere – failed in every respect to attribute the Crabeth glass. A sense of age and quality that emanated from the piece (such as the reveal of physiology through translucent, flowing robes), kept me steadfast in my determination that both the experts and my dear friends (including an renowned glass and enamel collector) were mistaken, and that this was a project worthy of more devoted research. The glass had always seemed to me of the Da Vinci era – sixteenth century – but not Italian. So what next? Armed with only my own certitude as to the era of creation and my deduction that it must be stained glass and not reverse-painted (combined with a later feeling the faces appeared decidedly Dutch), I dove into a very concentrated search of images related to my theory.

The Corpus Vitrearum’s Vidimus website is certainly not a big hitter on Google, but in the cloud of candidates that emerged, I saw immediately that what I was looking at was called ‘silver-stained glass’ and that the roundels typifying the form were to be found online in great abundance at only one resource: Vidimus. In a very short time, I moved from the art world’s dismissal of the glass as a nineteenth-century Italian copy, to my own deduction that this was an original sixteenth-century Dutch silver-stained glass panel. After nearly a century in my family collection, through several generations who had failed to deduce its origins, subject, artist, age, medium, or value (and then several more recent years in which art experts had viewed it and rejected it as little more than junk), I came-up with the correct medium, century, and country of origin – only after logging substantial hours on Vidimus. Vidimus referenced Timothy Husband’s Metropolitan Museum catalogue The Luminous Image, which confirmed for me that I was looking at a piece from the Crabeth family (though not specifically Wouter, as examples by him were scarce) or by Jan Swart van Groningen, the latter of whom was reputed to be the teacher of Adriaen Pietersz Crabeth, but was not known for stained glass.1 I then located the art historian, Peter van den Brink, who had worked on several of the artists in question. I first found Peter’s attribution of a van Groningen painting in a Christie’s catalogue, and it was he who honed my deductions of ‘van Groningen’ or ‘Crabeth’ to Wouter Crabeth. Peter also knew the rest of the world experts in this subgenre of stained glass (including Zsuzsanna van Ruyven-Zeman, whom I had already read on Vidimus, Kees Berserik, and others). After seeing the work in person in 2014, and devoting time amongst his colleagues, Peter, who was then director of the Suermondt-Ludwig Museum / Aachen City Museums and a member of CODART at the Hague, contacted me from the Netherlands to confirm my research: The glass was absolutely authentic, agreed by all the world experts, and a startling find, as it was then the only example by Wouter Crabeth known to be in private hands. The fact that one of the first articles I read on Vidimus was van Ruyven-Zeman’s correction of attributions of Dirck Crabeth to Wouter Crabeth (the former was better represented in both private and public collections) was a fitting closure to the long and hard-fought path towards illumination (figuratively for me, literally for the glass).

The 2015 year-end cover illustration of Oud Holland (the oldest continuously-published peer-reviewed art historical journal in the world) featured my soon-to-be-donated Habakkuk and the Angel.2 This was followed in 2016 by a lavishly illustrated article on the UNESCO-listed stained glass windows at St Janskirk in Gouda by Wouter and Dirck Crabeth.3 In the former article, Peter van den Brink corrected a long-held misattribution (by my grandfather, in the early 1900s) of the figures on the Crabeth glass as ‘St Tobias and the Angel Raphael’ to ‘Habakkuk and the Angel’. Peter’s revelation of the true Biblical story (Daniel 14: 32–38, in which the prophet is carried by the angel to feed Daniel, waylaid in the lion’s den) added a richness and satisfaction to the history of the piece that was wonderful to behold, and a work of brilliant scholarship that had eluded others for generations. 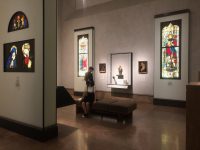 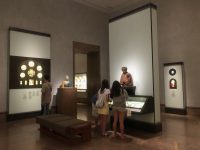 Wouter Crabeth’s The Prophet Habakkuk and the Angel is now one of the cornerstones of ground-breaking curator Lee Hendrix’s masterful chapel-like enclosure (Fig. 2) atop the Getty’s famed hill in Brentwood, California. Moreover, the Crabeth is the only autograph Dutch sixteenth-century silver-stained glass on display in the museum’s collection, surrounded by several unattributed examples from the Netherlands (Fig. 3). Getty sculpture and decorative arts department head, Dr. Anne-Lise Desmas, associate curator Geoffrey Weaver, and associate director of collections, Dr. Richard Rand, were instrumental in accessioning the piece, and their own research and recognition of the quality and significance of this Dutch Renaissance masterpiece are to be applauded in a wider art world with so little knowledge of – or appreciation for – this medium.

The Wouter Crabeth panel that I donated to the Getty in 2016 was never auctioned and never offered for sale at any gallery. I had always seen this masterpiece as earmarked for donation to a museum – if I could but convince the world, first, that it warranted such inclusion. Revealing what it was, the artist who made it, when and where it came from – these were the keys to that voyage, and the ship that finally made it set sail was the Vidimus website: the digital archiving of the Corpus Vitrearum. Before my father died last year, it was a warm moment to watch my parents sit in the Getty Museum’s sanctuary devoted to stained glass, so much like a church, where they silently prayed in the same way one imagines medieval householders might have venerated these devotional glasses half a millennium ago.

Several close friends who straddle that liminal space between the creative arts and academic realm that undergirds museums and collections were supportive to me amidst those others who thought my belief in this silver-stained glass was unfounded, and I wish to thank them for that support: Hollywood art director, Jeannine Oppewall, who stood by me in my 2016 museum donation (and in August 2022, photographed the Getty’s North Pavilion gallery for this article), esteemed Japanese cloisonné collector and enamel expert, Stephen W. Fisher, whose friendship included a constant education in art glass, and international art collector and Chinese linguistics scholar, Cindy Peijen Tsai, who supported my conservation of the glass prior to the Getty donation. 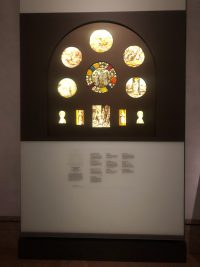 By good fortune and grace, Vidimus readers are aware that so many of these delicate treasures are found in similar roles in the churches of England to this day. I hope these readers will take time to venture forth and enjoy them, whilst staying in communion with and supporting this wonderful online resource from the Corpus Vitrearum, which I have no doubt will lead to similar discoveries by others in the future. With sincere thanks to the staff, educators, conservators, and directors of the Corpus Vitrearum, and the creators, web designers, and tech staff of the Vidimus website, I am, forever grateful.

Author John David, ‘J.D.’, Hodder studied classics and biology at UCLA, and in 2002 founded an environmental non-profit in southern California. After a decade as a research scientist attached to land preservation and native species conservation projects in the public interest, he parlayed his earlier interdisciplinary academic career (including research credits in art history publications, as well as his own poetry published pseudonymously alongside such luminaries as Obama’s Poet Laureate, Richard Blanco) to a family research project on maternal Holocaust origins. His art history research (beginning in 2007) has emphasized the publication and donation of family art in remembrance of lost relatives, sharing their legacy with the world. Among numerous philanthropic donations to museums, universities, schools, Holocaust and other charities worldwide, his first family artwork donation was to LACMA in 2015 (an 1880 Venetian watercolor by John White Alexander), followed by the 1565 Wouter Crabeth glass in 2016. More donations are planned. His support and contributions to Mary Anne Goley’s biography of the artist, John White Alexander (2018), and Peter van den Brink’s Dürer War Hier (2021), which accompanied the Dürer exhibition at the Suermondt-Ludwig Museum, Aachen, have been warmly acknowledged.4