Corpus Vitrearum International: The 11th Forum for the Conservation and Technology of Historic Stained Glass

After a delay of two years, the 11th Forum for the Conservation and Technology of Historic Stained Glass was held this past July in Barcelona. Not only was the event a wonderful opportunity to connect with members of the stained-glass conservation community, this year’s Forum was significant as the first since 2004 to be held in tandem with the art historical Colloquium, successfully bringing together experts from both areas of the field. The Forum ran from 7 July to 9 July and was hosted by the Catalan committee of the Corpus Vitrearum in collaboration with the International Scientific Committee for the Conservation of Stained Glass and the Institut d’Estudis Catalans. The over-arching theme was ‘Stained Glass Conservation: Preserving Identity’.1

The first day brought together members of both the Colloquium and Forum on a bus transfer to Girona to attend a morning of lectures at the Casa de Cultura de la Diputació. The initial session of the Forum included talks by Hans-Jürgen Damms, Sarah Jarron, and Emily Yates. Damms began by presenting research undertaken by himself and Michael Robrecht on environmental protective glazing, including data collected using the Custos Aeris dew point monitor. This was followed by Sarah Jarron and Emily Yates who both spoke about different aspects of their work conserving the West Choir Windows at Naumburg Cathedral in Germany. A substantial and complex project, it was fascinating to hear how Jarron, Yates, and their colleagues Jana Hildebrandt and Mayre Maquiné were able to address concerns of previous interventions, paint loss, and deterioration seen in the West Choir Windows. The second session, in which Colloquium and Forum delegates joined forces, centered around insights into the construction of medieval windows. Stefan Trümpler spoke on the use, survival and interpretation of preparatory tracings on the exterior surfaces of stained glass from the late Middle Ages and Early Modern Period, a phenomenon he had first described at a Corpus meeting in 1989. In preparation for the afternoon’s visit, Anna Santolària presented an overview of the windows in Girona Cathedral, including a series of twenty-two panels in the clerestory windows of the choir known to have been constructed using whitewashed tables in the church’s collection, and the 2019 discovery of a previously unknown window hidden by an altarpiece. In addition to linking this method of construction to extant windows, Santolària explained how there is evidence of earlier craftsmen accommodating designs on the tables. Being able to see the windows and whitewashed tables during the tour of the Girona Cathedral and Art Museum later that day was a highlight for both Colloquium and Forum attendees (Fig. 1).

The second day of the Forum was held at the Seminari Conciliar de Barcelona within the Universitat Ramon Llull,and included three lecture sessions covering a range of topics from historical research, innovative conservation treatments, and compositional analysis. The morning session began with talks by Fernando Cortés Pizano on the role taste plays in art conservation, followed by Barbara Trichereau’s presentation of the results of a compositional analysis study undertaken on sixteenth-century glass at St. Mary’s Cathedral in Auch, France. Markus Kleine explained his work conserving mercury-amalgam mirrors from Dresden Palace, and Katharine Harrison spoke via Zoom on her work unraveling the intricate history and narrative order of the St. Cuthbert Window from York Minster. Conversations continued into the mid-morning session with a second presentation by Damms and Robrecht, demonstrating new developments in the use of artificial intelligence that allow for monitoring mold growth. Dunja Kielmann gave attendees a window into the nineteenth–century glass workshop of Ludwig Mittermaier, followed by Ronja Lammers whose talk on the twentieth-century artist Giselbert Hoke included valuable archival documentation that shed light on the significance of an otherwise dark and experimental window. Rob MacInnes wrapped up the session with an overview of his work developing an environmental glazing system specific to Lerwick Town Hall on the Shetland Islands.

The last session of the day featured talks on three complex projects ranging from work on the fenestration of a landmark church, to the remnants of a singular panel. Paloma Somacarrera spoke about her conservation of a window from the Immaculata Chapel in Montserrat Monastery and artist Darius Vilàs’s skillful layering of glass to achieve a trichromatic effect. Edyta Bernady’s treatment of a fifteenth–century panel from the Dominican Monastery in Kraków, Poland illustrated how reflectance transformation imaging (RTI) and polynomial texture mapping (PTM) can recover areas of lost imagery. Hopefully, visitors to the National Museum and Dominican Monastery will soon be able to see Bernady’s successful digital reconstruction alongside the conserved original panel. The final talk of the session was given by Drew Anderson on his and Brianne Van Vorst’s work at Trinity Church, Wall Street in New York City. In addition to stone movement altering the shape of window openings, Anderson and Van Vorst faced challenges produced by multiple previous restoration campaigns, including poorly painted replacement glass (Fig. 2) and the widespread use of asbestos in the setting material. The second day was capped by a visit to the Reial Monestir de Santa Maria de Pedralbes. Here, Forum attendees were able to tour the cloister and the church of this former royal abbey (Fig. 3) and heard about the conservation of the church’s medieval and postmedieval windows (Fig. 4). 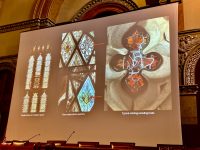 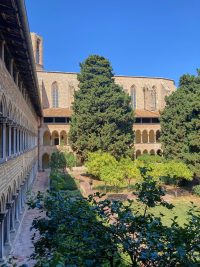 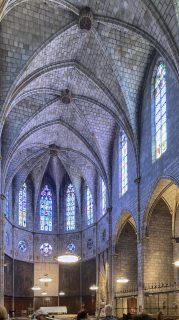 The last day of the Forum began with a meeting of the International Scientific Committee for the Conservation of Stained Glass followed by the final lecture session with talks by Sophie Wolf, Jordi Bonet, Carla Machado, and Anne-Catherine Perreau and Helena Wouters. Wolf’s presentation showed a variety of new non-invasive techniques for assessing the condition of dalle de verre matrices and support systems. Bonet presented research conducted in collaboration with Martí Beltrán and Trinitat Pradell on the causes of selective corrosion seen in Art Nouveau era enamel. Machado presented an overview of wide-ranging investigations into the composition of grisaille produced from the fourteenth to the twentieth century. A combination of detailed observational analysis, the reproduction of historic recipes and compositional analysis allowed Perreau and Wouters to propose important demarcations between sanguine and carnation. The meeting concluded with closing remarks from Ivo Rauch and Sarah Brown.

A huge thank you to all those organizing and participating in this year’s Corpus Vitrearum Colloquium and Forum. Each session provided invaluable insight into the variety of work being performed in the field, alongside new research findings and ideas. The successful connection of both groups emphasized how important future collaboration between conservators and art historians is to the overall preservation of stained glass.

Ali Wysopal holds an MSc degree in Historic Preservation from The University of Texas at Austin, and undergraduate degrees in art history and anthropology from Loyola University, Chicago. Prior to entering graduate school, Ali trained as both a stained-glass craftsperson and conservation technician. She has recently completed a yearlong fellowship focused on the conservation of stained-glass windows at The Metropolitan Museum of Art.