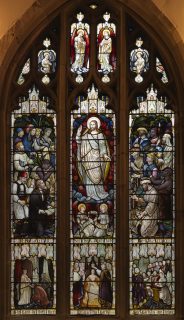 This special issue of the journal, edited by Kate Nichols, Jasmine Allen, and Gareth Atkins, takes the rich, but often ignored or overlooked, theme of nineteenth -century stained glass in the British world as its focus. Taking a multidisciplinary approach, it aims to reposition stained glass from one which most often sits on the margins of the scholarship to one that can elucidate many of the most important issues of society, culture, religion, science and technology during the long nineteenth century. The issue opens with a lively introductory round table discussion between the editors which outlines the potential impact, as well as the many challenges, of nineteenth-century stained glass as an area of scholarship. Nichols, Allen, and Atkins are clear about the rich possibilities of the subject, particularly in explorations of stained glass as crucial sites of non-elite interactions with visual and material culture. In the nineteenth century, when the scope of this medium stretched well beyond ecclesiastical spaces into public and domestic spheres, there is the potential for a deeper understanding of the democratisation of audiences for the arts. As the editors make clear, the lack of engagement with, and understanding of, religion has to be seen as one of the reasons why the study of stained glass has been overlooked by so many scholars of the arts, humanities, and social sciences. However, a number of other factors such as the perception of stained-glass windows as part of the architecture of a building, rather than artworks in their own right, the overlapping of science, technology and manufacture with art, and the sheer quantity and geographical spread of the medium.

In the round table and article Atkins outlines how both the revival of Anglican architecture and design and the move into secular subjects and spaces in effect created a new pantheon of earthly saints representing empire, royalty and politics, the arts and culture, and science and technology, as well as religious figures. This essay opens up possibilities into how these depictions of both religious and secular saints can (quite literally) offer vital windows into these worlds, and why these subjects and people were publicly celebrated.

Allen’s engrossing article on the (now sadly lost) windows commissioned in the 1860s for the South Kensington Museum, a building which was deliberately positioned as a ‘work of art’ itself. Allen argues that the commission of stained glass was not only designed to highlight the contemporary stained-glass industry in Britain, but served to emphasise and celebrate the ideological role of the museum and the Schools of Design as a key national and international site of the union of art, manufacture, science, and technology, as well as its fundamental purpose in the field of education and learning. Whereas Allen’s discussion focuses on lost and overlooked glass in the capital, Veronica Smith’s exploration of the use of glass at Rochdale Library, Museum and Art Gallery offers a much needed perspective on the frequently ignored subject of glass as a symbol of civic pride, as wells a fascinating exploration of gendered space in the building, including a window in the women’s reading room celebrating successful and independent women authors of the age. This secular and political use of glass tells us much about the confidence and wealth of industrialised, imperial Britain.

The complexity of subjects and symbolism portrayed in many examples of Victorian stained glass is perfectly illustrated in Jim Cheshire’s close reading of the ‘Jubilee of the Nations’ window at Great Malvern Priory, a celebration of the 1887 Golden Jubilee of Queen Victoria (Fig. 1). The window draws together themes of British imperialism and imperial trade, medievalism, exoticism, religion, monarchy, technology, industry, and philanthropy. In another close reading of a jubilee window, Kempe’s Diamond Jubilee window in St Saviour’s, Southwark, Michael Ledger-Lomas explores the celebration of Victoria’s reign and role as figurehead of both the monarchy and the Anglican church.  Alex Bremner’s photo-essay on the use of stained class as a mode of transmitting colonial and religious values, sentiments, and ideologies across the British World, serves to highlight the complexity of themes and imagery, including disturbingly racist imagery, used in what were seen as either instructional works of art for the ‘subjects’ of the empire and the Anglican Church, or as sentimental conduits of memory and longing for the British Isles.

Like Cheshire and Ledger-Lomas, Karen Burns also focuses on one window, albeit from a highly multidisciplinary perspective. Taking a stained-glass lunette in Flinders Street Station in Melbourne as the starting point for a fascinating, poetic, esoteric and unsettling, journey of exploration, Burns draws us through the ‘dreamworlds’ of travel, technology, communication, and utopian vision inherent in the biological processes and forms depicted in this window. Burns argues convincingly that these dreamworlds are embedded in racial discourses of the time, which were so fundamental to colonial and nationalist ideals and infrastructure, and implicit in the architecture and design that constructed them.

The editors also discuss the great potential for anthropological, as well as historical, insight into the complex world of ‘lived religion’ during the period, with old and new religious sects and denominations vying for members and spiritual authority. The stained glass that they commissioned for their places of worship can shed light on their beliefs and financial standing, as well as how they presented themselves to both their adherents and to the outside world. In an era when these multifarious religious beliefs can seem baffling to many, stained glass can bring some clarity and understanding to the twenty-first century scholar.

The panel discussion also emphasises the importance of multidisciplinary approaches to stained glass in this period, particularly an understanding of the science and the various techniques involved in its manufacture, and the varied practices used, and attitudes towards restoration and conservation, both in the nineteenth century itself and since. Sarah Brown’s article offers a crucial exploration of the changing approaches and methodologies used in restoration of medieval glass and their implications and importance for conservation and for art historians today. The article also highlights the significance of the development of technical and chemical analysis of glass for understanding how glass alters and degrades over time.  Key to Brown’s argument is the acknowledgement that, across the span of more than a century, authenticity can mean many different things to many different people, and those ideas and decisions have created the glass that survives in public buildings that surround us.

Thea Goldring’s article focuses on the deployment of chemistry in approaches to manufacture during the nineteenth-century stained glass revival in Britain and France, and the ways that it was used either to support the idea that glass should be an artistic evolution that departs from historic styles, or that it offered an opportunity to recreate the translucent world of medieval glass. Indeed, the idea of stained glass as an evolving artform underpinned by chemistry is further explored in Sally Rush’s discussion of the technical virtuosity of an 1828 glass painting by William Cooper based on John Martin’s painting Belshazzar’s Feast. Indeed, the multifarious approaches to stained glass design and creation in the nineteenth century is outlined by Martin Crampin in his examination of the many varieties of medievalism during the period. Thomas Kupper’s article on the previously unexplored area of amateur stained glass in British churches, particularly that made by women artists, also highlights the importance of individual faith and artistic endeavour in the making of stained glass during the nineteenth century.

As Allen discusses, coloured glass is an ’ideological medium’, something which is abundantly clear in the essays of this special issue and which the celebrated scholar of translucent glass, Isobel Armstrong, emphasises in her afterword to the essays. The editors noted in the opening panel discussion that they hope this collection of essays will do for nineteenth-century coloured glass what Armstrong’s work Glassworlds did for clear glass, and that it is a set of tools and ideas to inspire future scholarship in a fundamentally under-researched field. Undoubtedly this is a landmark collection of scholarship into nineteenth-century stained and painted glass, which should ignite the passion and interest of scholars from a wide variety of disciplines to unearth the fascinating realms and ideas held within the windows of the British World.

Sally-Anne Huxtable is an Art and Design Historian, specialising in the nineteenth and early twentieth centuries. She is Head Curator of the National Trust, Chair of the Design History Society, and sits on the Acquisitions and Disposals Committee of the Stained Glass Museum.