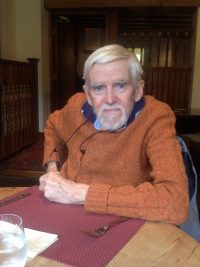 Gordon Plumb, who specialised in the photography of stained glass for over 30 years, and whose images have appeared in numerous Corpus Vitrearum publications at home and abroad, has died at the age of eighty. Born in Balsham in Cambridgeshire, his was a happy rural childhood in which the church played a large part. After early setbacks thanks to serious bouts of pneumonia, Gordon flourished in the sixth form of his local grammar school. He went on to the University of Leeds to study Geography, although his growing interest in history drew him to a course in economic history taught by Maurice Beresford. In 1974 he joined the library service in the London borough of Lewisham, in charge of the scientific reference library, but in 1977 was encouraged to take a senior post with the National Water Council. In many ways this was a watershed year, as following the death of both of his parents, he finally decided to follow his religious vocation and to train for the priesthood. His career in the church took him to Biggleswade in Bedfordshire and then on to Grantham in Lincolnshire. His years in Grantham were happy ones, although he was also to suffer serious injury in a bicycle accident that left his health impaired. He was subsequently to take over the leadership of the Low Villages ministry, five Lincolnshire parishes, including Saxby All Saints, from whence he retired in July 2007.

Photography was an early interest, beginning in his Lewisham years, when he also took classes in medieval art and architecture at the famous Morley College, making him a discerning and meticulous student of his photographic subjects as well as an excellent recorder of them. By the time of his death Gordon had added nearly 28,000 digital images to his Flickr site, most of them of stained glass, and had scored 5.8 million Flick views. His other passions included reading and book collecting, and his was a formidable library by any standards, embracing liturgy, theology, church history, medieval art and architecture, and of course, stained glass. Golf became another source of pleasure, with a Veteran’s Trophy to show for his prowess. However, stained glass remained his abiding passion and many readers of Vidimus will have been beneficiaries of both his expertise and his kindness. International Corpus Vitrearum President Professor Tim Ayers writes: ‘Gordon had a deep knowledge of stained glass, and shared it most generously over decades. He was a strong supporter of Corpus activities, and took hundreds of photographs for the project over the years, both for our books and for the web archive. He pioneered public access to stained glass through Flickr and the internet. Gordon cared a lot, which meant that his opinions were sometimes expressed vigorously! He was also a loyal and kindly friend, with a wicked sense of humour.’

Gordon is survived by Di, whom he married in 1966, and his two daughters. 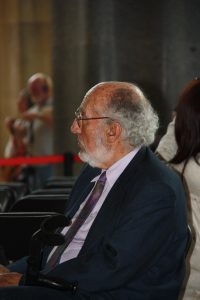 It was with great sadness that Vidimus learned of the death on 11 November of Catalonia’s most revered contemporary exponent of stained glass, entrusted since 1999 with the glazing of the cathedral of the Sagrada Família in his native Barcelona according to the intentions of its architect Antoni Gaudí (1852–1926).1

Between 1950 and 1955 Vila-Grau studied at the Barcelona School of Architecture, but soon followed his father Antoni Vila Arrufat (1894–1989) as a painter. His interest in liturgical art and his admiration of Romanesque art found particular expression in his stained glass. Vila-Grau was also a scholar and author of distinction, whose publications included Els vitrallers de la Barcelona modernista (with Francesc Rodon, Barcelona 1982), El Vitrall Gotic a Catalunya: Descoberta de la taula de vitraller de Girona (Barcelona 1985), El vitrall renaixentista (Barcelona 1991) and Le vitrail dans l’architecture de Gaudí (Barcelona 2004). He contributed to five volumes of the Catalan Corpus Vitrearum: Santa Maria del Mar, Barcelona (1985), Girona Cathedral (1987), the monastery of Santes Creus and cathedral of Tarragona (1992), the monastery of Pedralbes (1997) and the cathedral Urgell and the collegiate church of Santa Maria de Cervera (2014).