December’s issue of Vidimus includes reports on the York Minster East Window Masterclass; the Gertrude and Robert Metcalf slide collection, now held by the Index of Christian Art, Princeton; the return to Germany of some important glass that had been held in Russia; and a newly discovered roundel of St Bernard receiving the embrace of Christ. We are also saddened to report of damage caused to rare thirteenth-century glass in Lincoln Cathedral by an intruder.

The Panel of the Month for December is from Christ Church Cathedral, Oxford.

Finally, we bring you this year’s Christmas ghost story … ‘An Incident in Alsace’.

Merry Christmas from all at Vidimus! 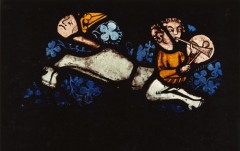