From the late fifteenth century, the roundels and other unipartite panels produced by glass-painters in the Netherlands surpassed those of their foreign competitors in both quality and quantity. However, since they are smaller, less eye-catching and more modest in aim than monumental glazing schemes they have received less attention.

This book is the third and final instalment of a series of catalogues intended to give the numerous examples remaining in Flanders the recognition they merit. It follows the format of its predecessors published in 2007 and 2011. All entries start with a brief summary of the building or collection in which the panels are housed. Each individual panel is then illustrated with comments on its iconography, attribution, technique, condition and provenance. The date, dimensions, any bibliographical references and related material, such as print sources, drawings and other artworks based on the same designs, are listed. The text is sparse, but the illustrations are generous, with every panel and much of the related material being reproduced in colour. Each panel’s geographical area of production is listed, but relatively few of them can be assigned to named glass-painting workshops. 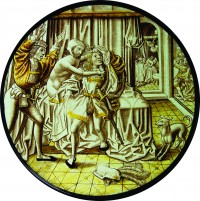 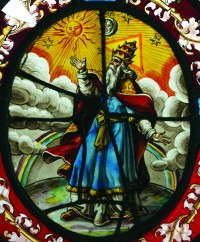 Since unipartite panels were produced for patrons and buyers ranging from individuals and families to assorted corporate bodies and institutions, their subjects are diverse. Detailed and dramatic scenes designed for larger media such as paintings and tapestries are often faithfully depicted in miniature. Examples here include the suicide of the lawgiver Charondas, which apparently occurred in the midst of an architect’s pattern book [Fig. 1], and Duke Herkinbald rising from his deathbed to kill his rapist nephew, with smaller background scenes depicting both the rape and Herkinbald’s death [Fig. 2]. Religious subject matter ranges from biblical scenes such as the Creation [Fig 3], conventional images of saints [Fig. 4] and cycles of their lives [Fig. 5], to specific and localized events, such as the adoration of Our Lady of Scherpenheuvel by a crowd of devotees spanning the social spectrum from the Archduke to an exorcised woman. Popular secular subjects include birds and the Labours of the Months, but by far the largest category consists of armorials, some supported by figures [Fig. 6]. A shorter separate section is devoted to panels that simply bear inscriptions, some of which stand alone while others accompany scenes or armorials.

Most of the earlier roundels, constrained by the colour palette of dark paint and varying hues of yellow and orange stain, rely on their subject matter and fine draughtsmanship to attract the viewer’s attention [Figs 1 and 2]. From the later sixteenth century onwards, the development of a wider and more vivid range of enamel paints resulted in the production of some dazzlingly colourful panels [Fig. 3] and of elaborate decorative borders that often compete for attention with their contents rather than simply framing them [Fig. 5].

While most of the panels are in a reasonable condition, some are disfigured by mending leads [Fig. 3] or the deterioration of coloured enamels [Fig. 6], and a few are so fragmentary that it must have been hard to determine whether they originally formed part of a unipartite panel or a larger composition.

The final section of the catalogue records panels formerly located within the region but now lost due to destruction or sale. It includes some lengthy extracts from nineteenth-century auction catalogues, emphasizing just how difficult it is to keep track of these small, portable artworks. Where possible the lost glass is illustrated, partly in the hope that some pieces now lurking in foreign collections may eventually be recognized. 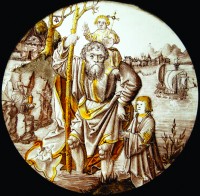 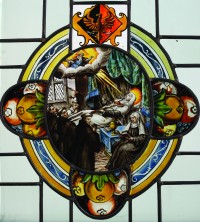 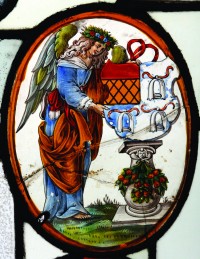 This volume differs from its predecessors in two significant respects. Firstly, there is a greater interest in identifying the bearers of armorials, thanks largely to the assistance of the heraldic expert Marc Van de Cruys. This provides some compensation for the omission of heraldic blasons from the text and reveals interesting details, such as the badge of the Antwerp Kolveniers military fraternity displayed on a donor’s sleeve [Fig. 4]. Then there is the matter of funding. Both the previous volumes were produced with Flemish government money, but recession has since bitten, resulting in this one being sponsored by the King Badouin Foundation, the Union Académique Internationale and the University of Antwerp, where Joost Caen is a Senior Professor of Conservation Studies. Happily, the change of patrons has not led to any reduction in the scale or quality of this volume compared with its predecessors, and it is hoped that the continuing economic downturn will not adversely affect the future publications planned by these authors.

Inevitably printed volumes, even those as impressive as this, lack the flexibilty of an online resource, and as the series progresses the constraints become more apparent. Related material published in the two earlier volumes is often cited in this one, leaving the reader flipping between the three. There are three set of indexes to consult, and the fixed format cannot cater for rediscovered and newly relocated panels or the recent publication of related material. A searchable online database of images of unipartite panels in the Low Countries, similar to the British CVMA’s Picture Archive, would be an extremely helpful supplement to the printed works. The scanning and indexation required to set up such a database would be a large undertaking requiring sponsorship, but Berserik and Caen certainly have all the raw material necessary for such a project.

The book can be ordered from the publisher.

All images reproduced courtesy of C. J. Berserik and J. M. A. Caen