Merlyn Griffiths, a stained-glass student at the University of York, is appealing for information regarding crizzled glass. She is currently researching the crizzled purple glass found in a nineteenth-century church in Yorkshire, though it is understood that this problem was once more prevalent in green glass. 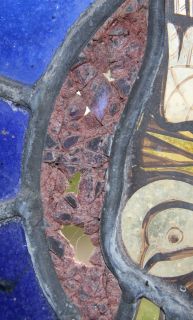 Crizzling has been called by various names, including ‘glass sickness’, ‘de-vitrification’ and ‘craquele’, and denotes a process of deterioration whereby micro-cracking forms throughout the body of the glass, leading to a loss in transparency and, in severe cases, disintegration of the glass. On account of the nature of crizzling, many examples have since been replaced by new glass, making it difficult to ascertain which windows once contained crizzled glass. Merlyn is interested in finding out more about other windows that either now contain or once contained glass suffering from crizzling, of any period, colour, manufacturer, or geographical area.

If any Vidimus readers are able to offer any anecdotal information about such glass, please contact Merlyn Griffiths directly at mrag500@york.ac.uk. Thank you!

Call for Papers: ‘Shared Invention: From Antiquity to the 21st Century’

An international colloquium entitled ‘Shared Invention: From Antiquity to the 21st Century’ will be held 6–8 April 2016, and proposals for papers are now being accepted. The colloquium is being organized by Laurence Riviale and Jean-François Luneau, lecturers at Blaise Pascal University, Clermont-Ferrand (France), in partnership with Musée national Adrien Dubouché, Limoges (France) and Cité de la Tapisserie, Aubusson (France). It will take place in Clermont-Ferrand, Aubusson and Limoges. ‘Shared invention’, or collective creation, is the chosen theme for this international colloquium, whose aim is to enable art historians working in a range of fields to understand better creation in the fine arts and production in the decorative arts.

When an artist’s work of art is translated into another medium, if the craftsman is not himself the inventor, but only a docile workman, how can differences in two items made by two craftsmen according to the same design be accounted for, but by a margin of liberty and sensitivity in which the very personality of the maker expresses itself? This margin will be at the heart of the debate, taking into account historical, social, and cultural contexts of all the periods in question.

After the Middle Ages, during which painters and sculptors belonged to a regular, legally instituted trade, those whom we now denote ‘artists’ tried to distinguish themselves by invention, leaving execution or transposition to craftsmen, and strove to elevate their trades to the dignity of liberal arts. For Giorgio Vasari, such a claim is satisfied by the expression ‘arts of design’, which were to become the ‘fine arts’, that is, painting, architecture and sculpture. ‘Design’ thereby has became the discriminating point for all academies that were subsequently founded, from the Accademia delle arti del disegno in Florence (1563) to the French Académie royale (1648), and later on, the British Royal Academy (1768). Art historians have seldom questioned this hierarchy and have more readily studied the creations of a ‘genius’, leaving the craftsman’s production in the shadow.

But is invention only the privilege of the artist who provides the design? Recent scholarly studies have striven to understand the processes of creation at the heart of workshops through artistic documentation, such as the miscellanies of modelli and inventories of human positions collected by painters in the sixteenth century, revealing the almost universal use of what has been called, paradoxically, the ‘invention copy’ – that is, the creation of a new composition achieved by putting together heterodox bits from everywhere. This type of process highlights the role of the patron, who may be the true inventor, as he owns designs and ideas and is responsible for this aspect of the composition from beginning to end. In this case, the so-called ‘artist’ is but a kind of go-between, and can only be understood as a mere workman.

Papers devoted to etchings or engravings, stone masonry, wall-painting or paper, furnishing or fashion fabrics, chinaware, stoneware, stained glass, etc., are welcome, especially if they emphasize not only the margin of liberty mentioned above, but also the aspects of works of art appropriate to their destination and intended meaning. Summaries of 2500 or 3000 characters will be submitted, along with a short CV (three lines), before 22 June 2015, to laurence.RIVIALE@univ-bpclermont.fr, or laurence.riviale@orange.fr, or J-Francois.LUNEAU@univ-bpclermont.fr. Applicants will receive a reply in September 2015.

Languages: French, English (there will be no interpreters).

The BSMGP Summer Lecture will take place on Friday 19 June, opening at 6.15pm for a prompt 6.45pm start. The lecture will be given by Peter Cormack MBE, FSA, Hon FMGP, and is entitled ‘Exploring Arts and Crafts in Stained Glass: a 40 year Adventure in Light and Colour’.

This summer will see the publication of Peter Cormack’s book Arts & Crafts Stained Glass (Yale University Press) – the first comprehensive account of stained glass produced by members of the Arts & Crafts Movement in Britain, Ireland and USA from the 1880s to the 1950s. In the lecture, the author will discuss and illustrate some aspects of his forty years of research in the field. In the 1970s, stained glass was scarcely recognized as a major field of Arts & Crafts activity, so he set about the task of re-establishing its importance and researching the lives and work of its most important exponents. Working as a curator at the William Morris Gallery in London, Cormack organized the first ever exhibitions devoted to Christopher Whall (1849–1924), Henry Holiday (1839–1927), Paul Woodroffe (1875–1954) and Karl Parsons (1884–1934), as well as a pioneering exhibition of work by women stained-glass artists. These and their accompanying catalogues, along with lectures and BSMGP conference tours, gradually brought about a new appreciation of the rich and diverse heritage of Arts & Crafts stained glass. 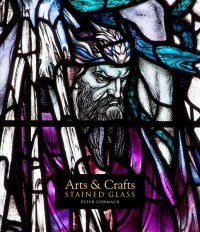 The lecture will provide a broad survey of the topics examined in detail in the new book, beginning with the Arts & Crafts reaction to late-Victorian developments in the aesthetics and practice of stained glass, in particular the debased historicism and commercial methods of the large firms. Among the pioneers of this critical view were Henry Holiday, Selwyn Image and H. A. Kennedy. Their example and polemical writings inspired Christopher Whall, who soon became the pre-eminent representative of a distinctively Arts & Crafts approach to the medium. By the 1890s, a new school of stained-glass artist-makers, led by Whall and including Mary Lowndes, Louis Davis and Reginald Hallward, had emerged to challenge the supremacy of the big manufacturers. Artistic regeneration went hand in hand with technical innovations, especially the making of new types of glass (notably the types of ‘slab’ and other textured glass produced from the 1880s onwards), which had a formative impact on design and workmanship.

Other major themes are the careers of women in stained glass, for this was the one area within the Arts & Crafts Movement where women and men truly worked alongside each other and achieved parity of status and achievement – an important advance made possible by reforms in the art education system. The teaching of Christopher Whall, Henry Payne and others are part of this story, showing how generations of young students absorbed the idealistic Arts & Crafts philosophy promulgated in Whall’s 1905 book Stained Glass Work. That philosophy fundamentally changed the course of stained-glass history, not only in Britain and Ireland, but also in the USA. 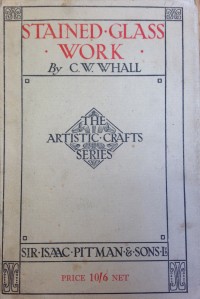 The generation of women and men trained by Whall and his followers became the leading designers of the first half of the twentieth century, and many were among the founding members and fellows of the British Society of Master Glass Painters. During his years of work on the subject, Cormack was fortunate to meet and interview some of the last representatives of the Arts & Crafts tradition, whose insights and recollections have informed his research.

This lecture will explore how stained glass offers a new way of looking at the Arts & Crafts movement, for the medium relies – arguably more than any other – on a complete and successful fusion of its aesthetic and technical aspects.

Date: Friday 19 June
Venue: The Art Workers Guild, 6 Queen Square, London WC1N 3AT
Cost: admission and optional buffet supper by ticket only; visit the website of the British Society of Master Glass Painters for details, to download a booking form or to book on-line.

Detail of window sIII: Christ in Majesty, before and after conservation. © Barley Studio

The Stained Glass Museum’s 2015 Annual Lecture will be given by Keith Barley FMGP, ACR, and is entitled ‘Herkenrode Conserved: the remarkable survival of a sixteenth-century masterpiece’. The lecture will describe the survival of this exceptional collection of stained glass from Flanders, its journey to Lichfield in the early nineteenth century, and the recent programme of conservation in Yorkshire in the twenty-first century.

Book online here. For further information, or to book in person please telephone 01353 660347 or email the museum.

The Stained Glass Group is holding a conference on ‘Working with the Evidence: Researching, Recording, Retaining, Removing Evidence of Earlier Intervention’. The conference will take place 17–18 September 2015, following the Annual General Meeting of the group.  The keynote speaker will be Marie Stumpff, who will give a lecture on the Boppard panels in the Burrell Collection, and papers are still being accepted. 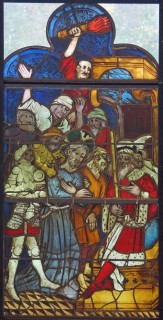 Christ before Pilate panel, from the Life of Christ and the Virgin window, Burrell Collection.

Almost all stained-glass panels bear evidence of alteration, restoration and earlier intervention. The careful observation, recording and interpretation through research of these layers of history is integral to the work of the conservator. The implications of these observations for future treatment and preventive conservation can often, however, be far from straightforward. Understanding the composition and nature of potentially damaging additions is essential to the evaluation of a conservation methodology, while explaining the historical context of alteration and repair can be the key to public enjoyment of a much-restored window. Papers exploring these technical, historical and ethical challenges in stained-glass conservation are invited. This event will provide participants with the opportunity not only to explore the Burrell Collection before it closes for a four-year renovation, but to look around after hours and enjoy a meal in the museum.

Proposals for twenty-minute papers (no more than 300 words, including title and name of corresponding author), should be sent electronically to Laura Tempest, assistant secretary of the Stained Glass Group, no later than 29 May 2015.

Costs and other details are being finalized; please email Laura Tempest to express an interest, offer a paper, or receive more information nearer the time.

As mentioned in Vidimus 89, the Society of Glass Technology conference will be held 7–9 September 2015 in Cambridge. The papers on the history and heritage of glass may be of particular interest to Vidimus readers, and a complete list of speakers as well as abstracts for the lectures are now available on the conference website.