Stained Glass from the Corcoran Gallery to Return to Park Abbey

Last July, Vidimus reported on the impending closure of the Corcoran Gallery of Art in Washington DC and the uncertain future of a group of seventeenth-century stained and enamelled glass panels originally made for the cloister of the Premonstratensian abbey of Park in Heverlee, Leuven (Belgium) by the glass-painter Jean de Caumont (Roger Rosewell, ‘Future of Park Abbey Windows Unclear’, Vidimus 81, June 2014) (fig. 1). It now appears certain that the glass will be returned to its original location in the cloister of Park Abbey. According to Katrien Deckers, architect for the city of Leuven, officials are now working on the final details of an agreement to return the windows to Belgium in the autumn of 2015.

Dissolution of the Corcoran Collection

The Corcoran Gallery of Art, founded in 1869 by William Wilson Corcoran (1798–1888), was the largest museum in Washington DC not owned by the federal government (fig. 2a, 2b). The Park Abbey windows were part of a bequest from William Andrews Clark (1839–1925), a controversial United States senator from Montana, who made his fortune in copper mining and railroads in the American west in the late nineteenth century. He built a home in the French Beaux-Arts style on Fifth Avenue in New York, which was considered grossly ostentatious and out of place even in the neighbourhood known as ‘Millionaires’ Row’. Completed in 1906, it included several art galleries for the senator’s collection (fig. 3). Over 200 works of art that were kept in Clark’s mansion, including the Park windows that had graced his study, were given to the Corcoran Gallery after the senator’s death. Clark’s heirs provided funding for an addition to the Corcoran Gallery to house the bequest.

Fig. 2a. Corcoran Gallery of Art. 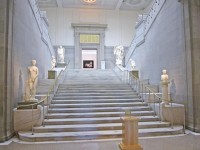 Fig. 2b. Corcoran Gallery of Art, entrance to the Clark wing. 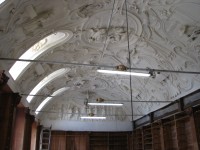 The agreement comes at a fortuitous time for the city of Leuven and the Flemish community, who have undertaken a major conservation project at Park Abbey (fig. 4). In recent years, as the number of canons at Park dwindled, the Premonstratensian order decided to turn over control of its buildings to the city of Leuven. With its medieval and early modern structures set on a sizeable fragment of its former land, Park is one of the most complete surviving complexes among the great Flemish abbeys. The restoration project includes both outbuildings and the conventual buildings of the sixteenth–eighteenth centuries. The seventeenth-century library (fig. 5), with its remarkable stucco ceiling sculpted by Jean Christian Hansche in 1672, has recently reopened, and work has begun on the refectory below it, which includes a second ceiling created by Hansche seven years later. 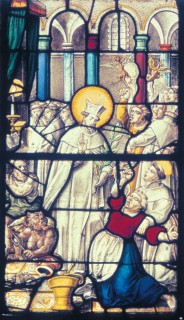 Major work has also begun on the architecture and furnishings of the church, chapter house, and cloister, among other areas. The cloister restoration project, led by architect Marc Vanderauwera, will include the reinstallation of as much of the original stained glass as possible. The Corcoran collection includes the major parts of six of the original forty-one cloister windows. These will join six other complete or near-complete windows that have either been given or sold back to the abbey from private collections over the past 70 years, and panels formerly belonging to the Yale University Art Gallery that comprise more than eight full windows (fig. 6). The latter were purchased in 2013 by the Flemish community, and are currently the subject of an extensive pre-restoration study headed by Aletta Rambaut. It is expected that recommendations for conservation of the windows from Washington will be added to this study.

Commissioned by Abbot Jan Maes of the Premonstratensian abbey of Park as part of a programme of repair and renewal of the abbey’s possessions following the ravages of the wars of religion and of Dutch independence in the late sixteenth and early seventeenth centuries, the windows were created by the glass-painter Jean de Caumont between 1635 and 1644. They filled the window openings on all four sides of the cloister (fig. 7). 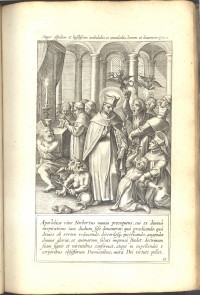 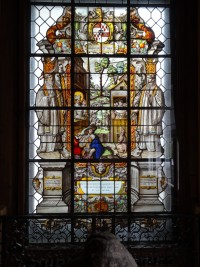 Scenes from the life of St Norbert, founder of the Premonstratensians, fill the central panels of the windows, and could originally be followed in order from birth to death around the cloister, starting at the entrance to the choir. Many of the compositions were based on a series of engravings of the life of St Norbert, published in Antwerp beginning in the early 1620s, and purportedly designed by the artist Maarten Pepijn (fig. 8). Similar prints served as models for the standing figures of venerated Premonstratensians that fill the side panels. In the lower register of each window was a Latin couplet describing the scene from Norbert’s life, flanked by architectural bases naming the side figures (fig. 9). Armorial panels representing the historical abbots of Park were placed at the top. These were also arranged in chronological sequence, following the same order as the story of Norbert’s life. 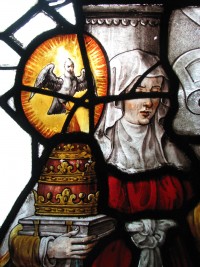 The cloister glazing may be considered the masterpiece of glass-painter Jean de Caumont’s career. Born into a family of glass-painters in Doullens, Picardy (France), he married the daughter of Leuven’s most prominent glass-painter and followed his father-in-law in that role. His work is known less for his skill as a draftsman than for his deft manipulation of all available techniques. He employed a remarkable combination of pot-metal, grisaille, and enamel paint, along with silver stain and both opaque and translucent sanguine paint, working both sides of the glass to create textural effects (fig. 10).

Sale and Return of the Glass

The use of the word ‘repatriation’ in the Corcoran’s legal agreement suggests that the acquisition of the windows by an American collector held some nefarious origin. In fact, more than half the original windows of the Park cloister found their way to American collections by quite legitimate means. Founded in 1129, Park Abbey was suppressed by the French Revolution in 1797. While the canons eventually regained possession of their buildings, they were not able to resume a common life until 1836. In the interim, they were forced to sell many of the works of art and furnishings that remained in the building. In 1828, Jean-Baptiste Dansaert, a Brussels shipping magnate, purchased all of the cloister windows. In the second half of the nineteenth century, the glass passed on to Dansaert’s heirs, and by 1890 at least two-thirds of the panels had been sold to different collectors.

One group of fourteen windows was exhibited at the Brussels Exposition of 1880. These and other Park windows were sold through the Brussels art and antiquities dealer M. Moens in the 1880s. In 1889, unable to sell all the glass in his possession in Belgium, Moens brought an unspecified number of Park windows to the Hôtel Drouot in Paris where he sold many, if not all, of them to the Viscount Louis-Frédéric of Janzé and his wife, Alix-Sophie-Louise Choiseul-Gouffier, Viscountess (1835–1915). They installed them in their house at 12, rue de Marignan in Paris, the former Hôtel de la Vénerie Impériale (fig. 11). 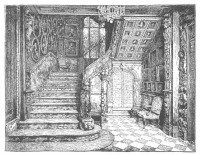 Ten years later, the Viscountess sold her windows to the American architect Stanford White, who would use them in the home of a client, William C. Whitney (1841–1904), former Secretary of the US Navy, on Fifth Avenue in New York, just a few blocks from William Clark’s mansion. White asked artist Francis Lathrop to rearrange the Park windows; some were used to fill a two-story glass portico behind a monumental staircase, to ‘modulate the light’. The rest were recomposed to fill two bay windows along a corridor in the back of the house. These windows remained in the Whitney house until 1942, when the large front window was donated to the Yale University Art Gallery, and the bay windows were sold to Dr Preston Pope Satterwhite (1867–1948). By a strange twist of fate, Satterwhite then lived in a luxury apartment building on Fifth Avenue that had been built on the site of the Clark mansion, which was demolished in 1927. Satterwhite left the windows to the Speed Museum in Louisville, Kentucky, where they remain today.

The precise travels of the Corcoran windows are less clear. However, Stanford White acquired a second group of Park Abbey windows a few years after the Whitney purchase; some of those windows were in his possession when he died in 1905, but it is quite possible that he had also sold some to Senator Clark.

Current Status of the Dispersed Glass

Yale University Art Gallery held the Park windows from 1942 until 2013, but never installed them; until recently they had only been seen by a handful of experts. Similarly, the windows at the Corcoran Gallery were installed in a room that ceased to be part of the public exhibition space at least thirty years ago. The Speed Museum is the only American museum to have placed the Park glass on continual public display. When the Speed reopens its doors next year after a major rebuilding campaign, the Park glass – arranged just as it was in the bay windows in the Whitney house – will again be a central feature of its decorative arts collection. The Royal Museum of Art and History in Brussels owns two complete windows that have been in storage since they were damaged a few years ago. Two other complete windows, both in excellent condition, are installed in private homes in Belgium. Several Park panels sold in the USA in the early twentieth century have disappeared. Others were certainly sold in the nineteenth century in England, where one small panel has been discovered. Others may yet be found.

The reinstallation of the Yale and Corcoran windows at Park Abbey will make them accessible to the public at last. The acquisition of the panels from the Corcoran Gallery will mean that more than half the original cloister glass can be returned to its original location. The glazing programme, conceived at the same time as the rebuilding of the cloister, took into account the progression of a narrative sequence and the strategic location within the architecture of significant events in Norbert’s life. Jean de Caumont also considered the different effects of light and color on each side of the cloister. The restoration promises visitors the opportunity to envision the seventeenth-century cloister as it was designed to be seen.

Aletta Rambaut, M. Vanderauwera, E. Shortell, S. Jarron, and K. Mestdagh, ‘The Masterpiece of Jean de Caumont returns to Park Abbey (Heverlee-Leuven, BE): Status Quaestiones of research into the reconstruction/relocation of the stained glass in the cloister’, Stained glass: how to take care of a fragile heritage? Acts of the Forum for the Conservation and Technology of Historic Stained Glass, Paris, 2015

Ellen M. Shortell, ‘Visionary Saints in the Gilded Age: The American Afterlife of the Park Abbey Glass’, in T. Ayers, B. Kurmann-Schwarz, C. Lautier, and H. Scholz (eds), Collections of Stained Glass and their Histories, Transactions of the 25th International Colloquium of the Corpus Vitrearum in Saint Petersburg, The State Hermitage Museum, 2010, Bern, 2012, pp. 239–52

Trustees of the Corcoran Gallery of Art v. The District of Columbia, Civil Action no. 2014 CA 003745 B; http://google.dc.gov/search?q=cache:q46d24nvAE4J:oag.dc.gov/sites/default/files/dc/sites/oag/release_content/attachments/Corcoran%27s%2520Motion.pdf+Corcoran+Gallery&output=xml_no_dtd&ie=UTF-8&client=dc_v2&proxystylesheet=dc_v2&site=oag&access=p&oe=UTF-8, accessed 10 June 2015