Fircone Books have come up with a splendid solution for a Christmas present this year. This pad of twenty photographs of stained glass in Oxfordshire by Richard Wheeler, author of Oxfordshire’s Best Churches (published in 2013), includes windows from the fourteenth to the twentieth centuries. The pad can be kept for personal references, or the indivisual cards detached and used. Each card includes a brief text about the image.

Oxfordshire was the first county to be covered by the British CVMA, but Peter Newton’s volume is sadly out of print. It is sometimes available through second-hand book websites. Churches already featuring in the CVMA Picture Archive are as follows: Chinnor, Kidlington, Shiplake, Waterperry, and Yarnton.

Copies of the pad can be obtained by emailing Fircone Books.

These three booklets provide a comprehensive guide to the medieval glass made for Holy Trinity Church, Tattershall (Lincs.), some of which still survives in the church, and other panels of which can be found scattered in St Martin’s Church and Burghley House in Stamford (Lincs.), and in the east window of Warwick Castle Chapel (Warks.) [Fig. 1].

These windows deserve to be better known for several reasons. Chief among these is that they provide an excellent benchmark for comparing late-fifteenth-century glass-painting in the then prevailing so-called insular style with the soon-to-be-preferred Renaissance style largely associated with the arrival of immigrant Flemish artists. The booklets provide a very readable account of the history of these windows, beginning with the building of the church for Ralph Lord Cromwell (d.1456) and continuing, courtesy of the surviving building accounts, with documentary evidence concerning both the subjects depicted in them and the names of some of the glaziers who made them. References to Thomas Wodeshaw (Woodshawe) and Richard Twygge are particularly interesting: they are listed as supplying windows for the church in 1482, including one in the nave south aisle depicting the Seven Sacraments. Another undocumented scheme in the same style depicting the Seven Works of Mercy, can also be attributed to them [Fig. 2].

It is often assumed, almost instinctively, that because of the fragility of glass and the difficulties of long-distance overland travel in medieval England, that glass-painters only worked locally. Yet Wodeshaw and Twygge seem to have had a workshop in the Malvern area, about 140 miles from Tattershall, and were clearly hired because of their skill and reputation. Other commissions undertaken by the partnership include windows at Great Malvern Priory, Little Malvern Priory, and the nave of Westminster Abbey. The same accounts that mention Wodeshaw and Twygge also list other glaziers working at Tattershall, collectively reminding us that major glazing schemes could involve painters from more than one workshop. Names include Richard Power of Burton-upon-Trent, who made windows depicting the Legend of the Holy Cross and the life of St James; John Glasier of Stamford, who was paid for making a window depicting prophets and Apostles with verses of the Apostles’ Creed; and a John Wymondeswalde of Peterborough, who made a Magnificat window (depicting the joys of the Virgin Mary) [Fig. 3]. 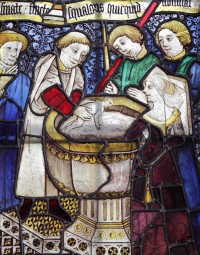 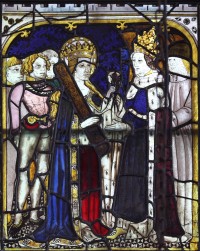 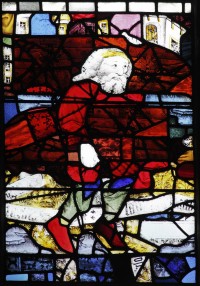 In 1757, a significant amount of the surviving glass from the church was removed by Lord Fortesque, holder of the advowson, and given to Lord Exeter, who agreed to reglaze the Tattershall windows with plain glass and make good any damage. Most of the removed glass was subsequently installed in St Martin’s Church in Stamford and in Exeter’s home, Burghley House; Exeter also gave some other panels to the earl of Warwick for his chapel at Warwick Castle.

In 1804, the medieval remnants surviving at Tattershall were collected and placed in the lower half of the east window, where they can still be seen today. They include two panels by Wodeshaw and Twygge depicting the sacraments of Confession and Baptism, and two panels from their Seven Works of Mercy series. A panel by Robert Power showing St Helena presenting the nails from the True Cross to her son, the Emperor Constantine, also survives.

The glass now in St Martin’s Church includes windows based on designs found in the so-called Biblia Pauperum, or Poor Man’s Bible, a fifteenth-century Dutch forty-leaf theological block book that was almost certainly produced for the less than impoverished! Essentially a typological study, the book contained scenes from the New Testament flanked by scenes from the Old Testament in which the latter prefigured the events of the former. The windows were probably originally made for the chancel at Tattershall. One of the better-known examples at St Martin’s includes an image of Samson carrying away the gates of Gaza, from which he has escaped, and which would have originally stood by its New Testament antitype, the Resurrection. Other panels from this same series can be seen in the great hall at Burghley [Fig. 4].

The Warwick chapel glass is neither as extensive nor as important as some of the other windows discussed here. The most interesting survival is a pair of angels flanking a central saint; others are composites or cut down fragments.

The author, contributors and publishers of these booklets are to be commended for making their knowledge of this important medieval glass available to a much wider audience than has previously been the case. Until their publication, the only alternatives were the difficult-to-find volumes by Richard Marks and Penny Hebgin-Barnes listed below. Although the cost of all three booklets may seem high, they can be bought individually for less, and the price needs to be set in the context of the church’s ongoing need for funds.