The six-hundredth anniversary of the Battle of Agincourt (Azincourt, northern France), the famous English victory over the French during the Hundred Years’ War, was commemorated on 24 October this year [fig. 1]. Echoes of the battle can be found in windows, old, lost and modern. This article is intended as an introduction to the event from a stained-glass viewpoint. Vidimus would be delighted to hear from readers who have additional information.

The Battle of Agincourt took place on 25 October 1415. It was the final act in what, until then, had been a largely disastrous incursion into France by the English Lancastrian king, Henry V. Despite capturing the port of Harfleur, his army had been severely depleted by stiff French resistance during the siege and the devastating effects of dysentery, the latter killing, among others, Richard Courtenay, the bishop of Norwich, and Michael de la Pole, 2nd earl of Suffolk. Weakened by these losses, Henry decided to return to England via Calais. The vanguard of the homeward march was led by some of his most trusted aides, Sir John Cornewaille and Sir Gilbert Umfraville, but the king found his route blocked by a large French army unwilling to allow him to escape. In the event, the heavily outnumbered and bedraggled English army managed to repel the massed attacks of the French and killed or captured many of their commanders. The story of the battle has been told in numerous books and perhaps, most memorably (if not accurately), in Shakespeare’s Henry V and several films of the play (fig. 2). 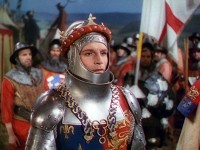 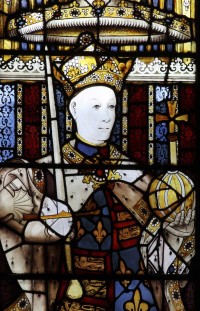 Although artistic conventions of the period precluded any sweeping depictions of the battle itself in painted glass, images of, or relating to, some of the key figures in the fight can be found in contemporary stained-glass windows.

According to eye witnesses, Henry V (b.1387, ruled 1413–22) was ‘very tall [6ft 3in.], slim, with dark hair cropped in a ring above the ears, and clean-shaven’. By the time of the battle, he was an experienced commander who had almost died as a sixteen-year old, when an arrow became stuck in his face during the Battle of Shrewsbury (1403). He is depicted clean-shaven and wearing plate armour in a window of 1451–61 at St Mary’s Guild Hall in Coventry (fig. 3). Made after the king’s death, this scheme, together with others (such as the royal figures commissioned for the library at All Souls College, Oxford, and the selection of saints depicted in the funeral chapel of Richard Beauchamp, earl Of Warwick), sought to legitimize the Lancastrian dynasty and assert the loyalty of their patrons.

Sir John Cornewaille (Cornwall), later Lord Fanhope, was a tough veteran of various campaigns and one of the most widely respected chivalric figures of the era. In 1400, he had been imprisoned for marrying Henry IV’s sister, Elizabeth of Lancaster, without the king’s permission, but was later released and made a Knight of the Garter in 1409. He was well known for his bravery and skill in jousts, and also excelled in military matters. He had defeated a French assault on Dartmouth, Devon in 1404, commanded a mercenary troop of 500 archers on behalf of John the Fearless, duke of Burgundy at the battle of Othée in 1408, and accompanied the king’s brother Thomas, duke of Clarence, on an ill-fated invasion of France in 1412.

At the Battle of Agincourt, Sir John captured Guillebert de Lannoy, a knight of the Golden Fleece, and Louis, count of Vendôme, whom he ransomed for large sums for money. His main estate was at Ampthill (Bedfordshire), where he built a castle. A window depicting him and his wife Elizabeth, dressed respectively in a tabard and a mantle, was formerly in the parish church of St Andrew at Ampthill. A modern ‘copy’ has now been installed, which differs from the original by showing Sir John kneeling on a cushion decorated with fleurs de lis rather than the plain design recorded by Wenceslaus Hollar in 1667 (fig. 4). Two shields of Sir John’s arms enclosed in a garter can be seen in a north nave clerestory window of another Bedfordshire church, St Michael and All Angels at Millbrook (fig. 5). According to Prof. Richard Marks, this is the earliest existing representation of a shield enclosed by a garter and is datable to 1428–43.

Sir John died on 11 December 1443 at Ampthill Castle. He was buried at the Dominican Friary at Ludgate in London, a site now known as Blackfriars. His tomb was destroyed during the Protestant Reformation. 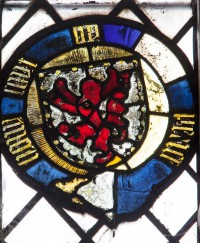 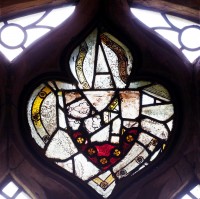 Sir Gilbert Umfraville of Harbottle had been a knight of the chamber since the beginning of Henry V’s reign. He was the nephew of Sir Robert Umfraville, constable of Warkworth Castle (Northumberland). Sir Gilbert’s banner was among those identified in the thin line of men-at-arms (the term used to describe fully armoured heavy cavalrymen) who fought on foot at Agincourt and formed the English front line. After the battle, Sir Gilbert continued to play a variety of important roles in the king’s French campaigns, until he was killed at the Battle of Baugé in 1421.

At the time of going to press, the writer has not found a stained-glass window specifically allied to Sir Gilbert. Part of the Umfraville arms (Gules a sexfoil pierced between 12 crosses botony or) survives in a shield with infills of late thirteenth-century stiff-leaf grisaille, at the parish church of St Peter and St Lawrence, Wickenby (Lincolnshire) (fig. 6).

During the battle, the English army was divided into three groups, with Henry holding the centre, Edward of Norwich, 2nd duke of York, responsible for the right wing, and Thomas Lord Camoys in command of the left wing. Sir Thomas Erpingham was in charge of the archers, who played a decisive role in the battle.

Edward of Norwich was a grandson of Edward III, and the highest-ranking English casualty of the battle. According to a recent study, almost a quarter of York’s own retinue died alongside him, suggesting that they were the target of an exceptionally fierce assault by the French left flank. Edward was a pious man. When he made his will during the siege of Harfleur, he called himself ‘of all sinners the most wicked and guilty’. Five years earlier, in 1410, he had applied to the pope for permission to create a college staffed by a master, twelve chaplains and four clerks next to his home at Fotheringay Castle (Northamptonshire). As the existing parish church was unsuitable for such an important foundation, the construction of a new church and college was begun, before 1412. The complex consisted of a church plus college buildings, such as a hall and cloisters. Edward was buried in the church in 1418, which subsequently became a Yorkist mausoleum. As most of the tombs were smashed during the Reformation, a monument to his memory was erected by Queen Elizabeth I. His arms are known to have appeared in the college hall attached to the church and they probably also featured elsewhere within the complex. A modern window in the church bears his arms (fig. 7). 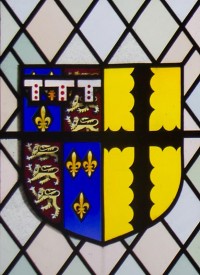 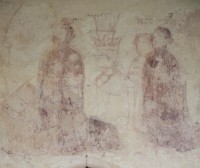 Fig: 8. Wall-painting of Lord Camoys with his son-in-law and daughter behind, Church of St George, Trotton (West Sussex).

Thomas Lord Camoys was sixty-five years old at the battle. He was an experienced soldier, having taken part in Richard II’s Scottish expedition of 1385, and fought in Henry IV’s wars against the Scots, Welsh and French. He was installed as a Knight of the Garter in 1414. No windows survive depicting Lord Camoys, but a memorial brass depicting him in armour of the period and wearing the insignia of the Garter is set into a table tomb in the chancel of the parish church of St George at Trotton (West Sussex). A wall-painting of the knight also survives above the south door of this church, and it is highly likely that heraldry memorializing Sir Thomas would have once appeared in the windows here (fig. 8).

Sir Thomas Erpingham (b.1357) was another seasoned veteran who had survived a long military career. In 1380, he had become a retainer of John of Gaunt and spent the next decade fighting in France and Spain to establish Gaunt’s claim to the crown of Castile and León. He also accompanied Gaunt’s son, the future Henry IV, on crusade in Prussia in 1390–91. In 1398–99, he commanded the ambush party that captured Richard II and held him as a prisoner in the Tower of London until Richard agreed to abdicate in favour of the future Henry IV. He was installed as a Knight of the Garter in 1401 and was marshal of England 1404–1405. Henry V had appointed him as his household steward on his accession to the throne and made him a witness to his will. His deployment of the archers at Agincourt was crucial to the English victory.

Although no medieval glass memorializing Sir Thomas survives at Erpingham Church, he was widely represented in other windows of the period. An engraving of 1793 shows him and his wives in a now-lost window in the north aisle of Norwich Cathedral (fig. 9).

After the Church of St Michael at Conisford, a sub-district of Norwich, was absorbed and rebuilt by the Austin Friars, Sir Thomas commissioned a window for the church containing eighty-two coats of arms with an inscription in Latin:

In English this is

Sir Thomas Erpingham, Knight, made this window in honour of God and all the saints, in remembrance of all the lords, barons, bannerets and knights who have died without male issue in the counties of Norfolk and Suffolk since the coronation of the noble King Edward the III. This window was made in the year of our Lord 1419.

His arms can be seen at the parish church of St Andrew at Hecklington, as well as in other churches in the county, including Banham (fig. 10).

After the battle, the king thanked God, the Virgin Mary, St George, and two of his favourite saints, St John of Bridlington and St John of Beverley, for his victory. The first of these favourites was an Augustinian canon who served as prior of St Mary’s Abbey in Bridlington (West Yorkshire) until his death in 1379 and was canonized in 1386 after various miracles were attributed to him, including saving the lives of some sailors whose ship was in danger of sinking. His image can be seen in the east window of the Beauchamp Chapel in the Church of St Mary at Warwick (fig. 11). 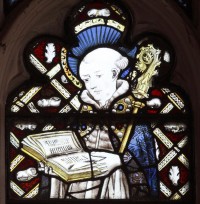 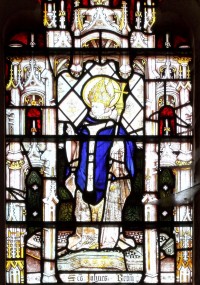 The other favourite saint, St John of Beverley, was an Anglo-Saxon bishop of York (705–18), whose cult enjoyed a strong following in the north of the England. In 1292, a new shrine was commissioned for him at the minster. In 1301, Edward I gave 50 marks towards the building of the shrine. He also diverted half of a fine owed by the town to the same purpose and ceded the remaining half. John’s relics were translated to the new tomb on 25 October 1307. Henry V gave some credit for his victory at the Battle of Agincourt to the miraculous intervention of John, the battle having been fought on the anniversary of John’s translation. Henry made John one of the patrons of the royal household and ordered that his feast be celebrated throughout England. Henry and his queen came to Beverley in 1420 to make offerings at the saint’s shrine. St John is depicted in a window at All Souls College, Oxford (fig. 12).

Henry V’s victory at Agincourt seemed a turning point in the war, but it was not to be. Under the terms of the Treaty of Troyes, signed in 1420, Henry and his heirs would become kings of France on the death of his wife’s father, Charles VI. But the French dauphin and nobility refused to accept the treaty and eventually drove the English out of most of their country with a series of decisive victories at the battles of Patay (1429), Formigny (1450), and Castillon (1453).

Juliet Barker, Agincourt: The King, the Campaign, the Battle, London, 2005 and reprints

Anne Curry, The Battle of Agincourt: Sources and Interpretations, Woodbridge, 2000

Richard Marks, ‘Some Early Representations of the Garter in Stained Glass’, Report of the Society of the Friends of St George and the Descendants of the Garter, V/4 (1972–73), pp. 154–56