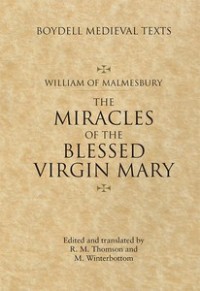 This volume is the first in a projected series entitled Boydell Medieval Texts, which aims to provide scholarly editions of major works with translations on facing pages [Fig. 1]. It is a complete edition of The Miracles of the Blessed Virgin Mary – compiled c.1135, when interest in Marian devotion was at its height in prominent English monastic circles, by the Benedictine monk William of Malmsbury. It is a triumph research and scholarship that augurs well for future volumes in the series.

William was an ideal collator for such an undertaking; he was a monk at Malmesbury Abbey, knew important people, and enjoyed a reputation as a fact-finding and reliable historian. He used his skills as a researcher to compile a text that included fifty-three stories from earlier manuscripts, various eye-witness accounts, and interviews with church leaders of the period. The stories are mixed in tone, with some substantial and well-known and others, in William’s own words, best described as ‘trifling’. Apart from being copied and circulated in his lifetime, William’s book also endured as a source for stories retold throughout the Middle Ages both in England and western Europe. As such, it provides a first-hand account of the context and prevailing beliefs of Europe in the early twelfth century and later.

The book begins with a beautifully written prologue, in which William not only praises the Virgin Mary, but explains that her Immaculate Conception and devotion to God mean that humankind will ‘receive with a hundredfold interest what they lost thanks to the first woman [Eve]’. William also discusses the controversy concerning Mary’s eventual fate and uses rational arguments and assumptions to conclude that Mary was assumed into heaven after her death because, among other reasons, God would not have allowed her nor wanted her to be buried in the earth, where the body which nurtured him would have turned to dust. The doctrines of the Immaculate Conception (Mary’s conception in the womb of her mother) and the Assumption were not generally accepted at the time. 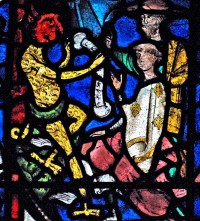 Fig. 2. Theophilus makes a pact with the devil, Lincoln Cathedral.

The miracle stories begin with the well-known tale of Theophilus of Adana in Cilicia (modern Turkey), who was rescued by the Virgin Mary after he had made a written pact with the devil. Four early thirteenth-century panels at Lincoln Cathedral depict scenes from this story, and others are known to have been made for Canterbury Cathedral. The tale also features in a thirteenth-century panel in the parish church of St Denys, Walmgate, York [Fig. 2]. Another miracle depicted in stained glass was that of the Jewish boy who converted to Christianity. He was thrown by his angry father into an oven, but rescued from certain death by the intervention of the Virgin Mary, who ‘dispersed the eddies of flame and smoke’. Two panels from this story also survive at Lincoln Cathedral. Interestingly, William uniquely describes this incident as happening in Pisa (Italy) rather than Bourges (western France), where other writers located the event.

Two points deserve mention here. The first is that readers should be forewarned of the virulent anti-semitism that colours a number of the stories. A miracle at Toledo (Spain) begins with a description of the city as ‘polluted’ by Jews; in another tale about a miracle in Toulouse (France) William calls the Jews an accursed race and promises his readers a story to make them smile – the killing of a Jew by a Christian using only single punch; and other stories in the same vein accuse Jews of greed and of insulting Mary or Christ. The second point is that relatively few of the miracles are said to have happened in England, one of the possible reasons that they are not shown as often in English stained glass as in French.

Apart from depictions in stained glass, some miracle stories appeared in medieval wall-paintings, most notably in a scheme of c.1330 in the parish church of St Giles at Chalfont St Giles (Buckinghamshire, England), which portrays individual scenes from the stories of Theophilus and the Jewish boy, and an extensive late fifteenth-century scheme in Eton College Chapel. The latter paintings are drawn from two other compilations, Jacob de Voragine’s Golden Legend and the Speculum Historiale by Vincent de Beauvais.