Seeking Salvation: Commemorating the Dead in the Late-Medieval English Parish, by Sally Badham, with photography by C. B. Newham, Shaun Tyas (Donnington, UK), 2015, hardback, 278 pages plus 96 pages of colour photographs, £39.95 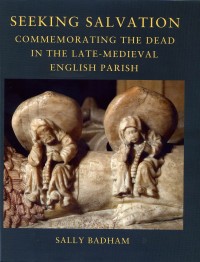 Medieval Christians are often said to have been obsessed with death, yet as this excellent book makes clear, their primary concern was not so much with the inevitable act of dying, but with the fear of what would follow, when even souls who had escaped hell entered purgatory, where they would be ‘refined’ or ‘purified’ before entering heaven [Fig. 1]. Thoughts of hell and purgatory terrified even the bravest, and contemporary accounts portrayed the latter as a terrifying experience. According to St Bridget of Sweden (1303–1373), likely torments included ears being burned, eyes being pulled from sockets until they hung loose on cheeks, arms cracked and broken, skin pulled off the head, and bones drawn out of the body as if they were a ‘thred of clothe’.

Naturally, Christians wanted to avoid such a place, or at least shorten their stay as much as possible. The church taught that the best way of achieving this was by piety and good works during a person’s lifetime. Many of these good works were aimed at the poor and needy, but they could also consist of improvements to parish infrastructure, including church building campaigns and the provision of new fittings and ornaments. According to Badham, this kind of spending reached a peak of frenzy in the late fifteenth and sixteenth centuries (although it must constantly be borne in mind that so much has been lost from this period that opinions might be different if everything had remained in place). Apart from performing good works, it was also believed that a soul’s period of suffering in purgatory could be reduced if the faithful living offered prayers for the dead; these were often in the form of masses sung by priests. 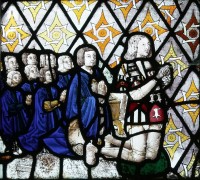 One of the key aims of this book is to show how these beliefs shaped the material culture of the late Middle Ages, inspiring people to build monuments to the dead (in the hope of prompting prayers on their behalf), endow chantry chapels (where priests prayed on behalf of the deceased), and give money (for the provision of stained windows and other fittings). The book examines these developments in separate chapters and relies heavily on the evidence of wills. Chapter titles are self-explanatory and include ‘Philanthropic Good Works in the Community’ (almsgiving, and the provision of schools, hospitals and bridges); ‘Church Fabric’ (building campaigns); and ‘Church Fittings’. The latter will be of particular interest to Vidimus readers, as it documents numerous glazing schemes endowed by testators who frequently had donor imagery, inscriptions, initials, heraldry, merchant marks and rebuses inserted in windows to publicize their gifts and attract prayers from grateful or caring viewers. Examples abound, such as the testamentary bequest of Robert Lamend (d.1474) of Stone near Faversham (Kent), who gave 6s. 8d. to the glazing of the north window of the church, specifying that the window should contain ‘in picture a crucifix, with Mary and John, and the Assumption of our Lady, with two Images kneeling in remembrance of me and my son rehearsing out names’. In other examples, as at Waterperry (Oxfordshire), windows incorporated figures of donors who had given other gifts to the church, or who were commemorated by monuments in the church. A typical inscription might begin ‘Orate pro anima …’ (‘Pray for the soul of …’), followed by the name(s) of the person(s) who had had the window made [Fig. 2].

Some wall-paintings also incorporated donor figures and associated texts, and the author includes numerous examples of wills that left money for the making and painting of roods and rood screens, fonts and font covers, pulpits and lecterns, pews and seats. Her mastery of the material is excellent, and every section of the book is meticulously researched. The breadth of coverage is impressive: chapter seven discusses church ornaments; chapter eight examines collegiate churches, chantries and post-mortem prayers; and chapter nine looks at religious guilds, bede-rolls and lights. Chapter ten is packed with fascinating details about burial rites and funerals, both common ones and those characterized by displays of status and power.

A concluding chapter tackles the underlying issue as manifested in contemporary literature. Was it really true that people could buy their way into heaven by paying for windows and wall-paintings? Or was it more likely to have the opposite effect, with God rejecting the commercialization of His mercy? An example cited puts one side of the argument bluntly. It is drawn from Passus III (the debate of Mede the Maiden and Conscience) from The Vision of Piers Plowman, a partly theological, partly satirical poem written by William Langland in the late fourteenth century. Mede has an encounter with a confessor in the attire of a friar, who, after absolving her from her sins put to her a proposition: ‘We have a window being worked on that will cost is a lot: If you would glaze the gable and engrave your name there Your soul will be certain to reach Heaven.’ Mede responds enthusiastically to the offer, but other authors in the same century suggested that pomp and pride might hinder rather than help.

The book ends at the Reformation and the destruction of many of the images and artefacts that defined and filled English medieval churches. Although this makes painful reading for those who care about such losses, the tragedy is somewhat alleviated by the scale of the author’s survey and the imagination it kindles. A further feature of the book deserves special mention: the superb ninety-six-page supplement of colour photographs that both enriches the text and reflects very favourably on the publisher, Sean Tyas. Most of these images are the work of C. B. Newham, an Australian photographer living in England who has devoted years of his life to recording English parish churches. The stunning imagery complements the author’s life-time study of church monuments and fittings and transforms the book into a monument to the humanity of medieval men and women [Fig. 3].