Symmetry, Colour and Antiquity: Nineteenth-Century Use of Continental Roundels in the East Window of St Peter, Nowton (Suffolk)

The Stained-Glass Trade and the Creation of a New Style

Cultural and religious changes wrought by the French Revolution and Napoleonic Wars meant that by the early nineteenth century Continental art objects were more readily available on the open market in Britain than previously.[1] This opportunity was readily exploited by both collectors and dealers, and stained glass was the earliest form of art object to be imported, with small roundels depicting biblical or secular scenes being particularly popular. This influx of Continental stained glass lead to the creation of a new glazing style, in which imported glass was combined with highly ornamental and brightly coloured surround pieces. 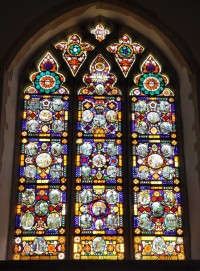 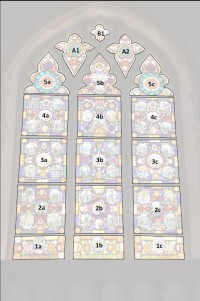 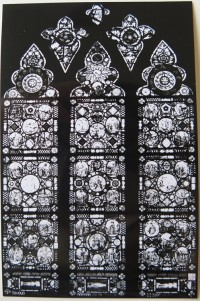 The church of St Peter at Nowton in Suffolk is one of the most complete glazing schemes of this type remaining in Great Britain. Although the scheme has been altered since the two periods of its creation in the nineteenth century, documentary evidence survives that allows us to have a good understanding of the original scheme. This is particularly the case for the east window (Figs 1 and 3).

The church of St Peter was largely constructed between the twelfth and fourteenth centuries (Fig. 4).[2] Few major interventions occurred prior to the nineteenth century, bar the building of a brick porch at the north entrance in 1730, and the embattling of the tower in 1749.[3] Two periods of alteration in the nineteenth century, both of which relied on the patronage of the Oakes family of Bury St Edmunds, are highly significant in relation to the glazing. 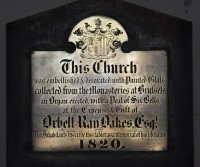 There is strong evidence that the glass of the first phase was installed in the church between 1816 and 1821. A group of etchings by John Sell Cotman (1782 1842) that served as the model for some of the new glass of this phase, the earliest of which dates to 1816, gives a terminus post quem (see below under ‘Sepulchral Brasses and Antiquarian Sources’); two 1821 sketches of the exterior of the church by John Buckler (1770 1851) or John Chessell Buckler (1793 1894) depict the outline of the glazing very faintly, proving that the scheme was in place by this time.[4] Orbell Ray Oakes’s largest donation to the church is commemorated by a brass plaque dated 1820 and is described as ‘Painted Glaſs, collected from the Monasteries at Bruſsels, an Organ erected, with a Peal of Six Bells’ (Fig. 6). This original scheme was altered by Orbell Ray Oakes’s son Henry James (1796 1875), who paid for the addition of a north porch and aisle to the church in 1843. At this time, the number of windows in the nave increased from three to nine and the stained glass there was reordered; the three windows in the eastern apse of the chancel remained unaltered. 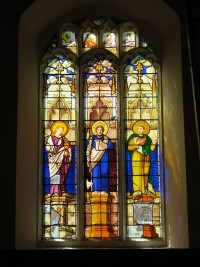 Fig. 7. Examples of Yarington’s large-scale figures from the west window at St Michael’s, Langley (Norfolk), originally in the nave. Photograph by Catherine Spirit, 10 May 2014

In the record of his visit to the church on 27 August 1829, David Davy (1769 1851) described the east window, writing that the roundels were ‘set in modern glass by a man at Norwich’.[5] This ‘man at Norwich’ must be Samuel Carter Yarington (1781 1846), who was the only glazier based in Norwich at the time of installation with the ability to paint and stain glass. Yarington was a prolific glazier working largely with Continental roundels, although several of his large-scale figures are extant (e.g., St Michael’s, Langley, Fig. 7). He worked with the well-known importer of stained glass Christopher Hampp (1750 1825), preparing glass for sale and installing collections into local churches (e.g., Langley).[6] By 1812, Yarington is advertising in the Norfolk Chronicle as a maker of stained glass, offering services directly relating to the trade in Continental stained glass: ‘Ancient stained glass windows re-glazed and defective parts restored, with the nicest attention to the original’.[7]

The East Window in the Twentieth Century

The only major recorded change to the east window occurred in 1965, when the bottom row of panels was removed and replaced with glass from outside the church. In addition to three seventeenth century Continental roundels, panels 1a c included a number of rosettes and yellow-stained border pieces in the style of Yarington. This work was undertaken by G. King & Sons (Lead Glaziers) Ltd and was thought to be the best solution to the failure of the window, which was causing panels 1a c to be crushed (see Fig. 2). Three roundels from the Neave Collection that were in King’s possession replaced the recumbent figure panels.[8] Despite the changes wrought at this time, it is still possible to consider the full original scheme, thanks to photographic records kept at the Norfolk Records Office in Norwich. By comparing the black and white photograph of the window prior to 1965 with the glazing as it is now it is possible to identify the probable colours and designs seen in the decorative glass surrounding the recumbent figures. The discussion here focuses on the pre-1965 scheme. 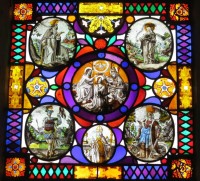 The distribution of Continental glass and ornamental border pieces in the east window gives this highly colourful ensemble an overall sense of symmetry (albeit reduced by the alterations made in 1965). This approach can also be seen throughout the church, but is most pronounced in the east window on account of its much larger scale.

In the main body of the window, panels 2a 4c, the division between panels has been emphasized through the use of near identical borders, constructed using diamond-shaped pieces, with an ornamental flower piece to mark each corner and a rectangular painted piece half way along each edge (Fig. 8). This border was also used around three of the edges of panels 1a c, as is clear from the pre-1965 photograph when the tones of the glass are compared to those of the panels above. The upper border of these lower panels is different, however (Fig. 9). It seems that the breaking of the repetition is an intentional design aspect, used to draw the attention to different areas of the window. The lowest row of panels contains recumbent figure panels based on medieval sepulchral brasses, and their placement in the window is reminiscent of donor panels in medieval glazing.

The borders at once separate the window into its component panels and give a feeling of unity on account of their uniformity. A similarly dual effect can be seen with the dominant use of circular shapes throughout the window as a whole. In the heads of the lights and the tracery there is little Continental glass, yet the use of variously sized circular pieces reflects the shape of the both the Continental pieces and the nineteenth-century rosettes in the main body of the window. At the same time, in panels 2a 4c the Continental roundels are the largest pieces, and their placement in the window makes it clear that the other smaller rosettes are there to provide a border for this collection.

As well as using repetition in border and shape to bring order to the window, a repetition of whole panels has been employed, in which lights a and c mirror one another entirely in the original scheme. This is not only the case with the nineteenth-century border and rosette pieces, but also with the shapes of the Continental roundels and the recumbent figures. A focus is thereby created on the central light, which is the only one to have Continental glass in the head glazing. Much as with the use of borders and roundels discussed, the careful distribution of shape and colour gives order to this highly colourful and decorative scheme.

The recumbent figures mentioned above are particularly significant, as only seven comparable panels have been identified, of which five are original to Nowton and two were in the porch of St Mary, Yelverton (Norfolk), until 2001. Houghton and Whitham have identified a series of engravings by John Sell Cotman as the source for these figures, by comparison with the three figures that remain in the church.[9] Cotman was a leading Norwich artist and he depicted a series of sepulchral brasses from both Norfolk and Suffolk in the series.[10] Indeed, it is possible to go as far as to say that the glass-painters used the etchings as direct models, since the glass versions are identical to the etchings in size and scale. 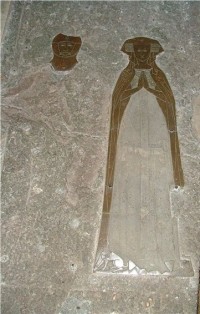 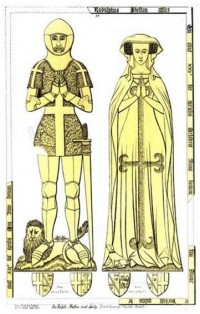 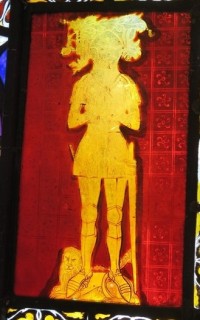 From the photograph of the original glazing scheme, two of the three figures in the east window are clearly identifiable. Panel 1b features Lady Margaret Felbrigge from the Cotman etching, dated 1816, taken from the 1413 brass of Sir Simon Felbrigge and Lady Margaret at St Margaret, Felbrigg (Norfolk). In panel 1c the figure is that of Sir Ralph Shelton, etched by Cotman in 1815 and taken from the 1423 brass of Sir Ralph Shelton with Lady Shelton at St Mary, Great Snoring (Norfolk).[11] The pre-1965 photograph is not detailed enough to identify the figure in panel 1a clearly. The Shelton figure from panel 1c is the only one of the five figures currently at Nowton (now in nVI 1a).

It is important to consider why Yarington deviated from rosettes and coloured glass to include these figurative panels into the east window. There was a great interest in monumental brasses in the eighteenth and nineteenth centuries, as is clear from the popularity of brass rubbing during this period.[12] Cotman’s etchings were actually executed using rubbings taken from Thomas Talbot’s earlier rubbings of 1793 94,[13] and he deviates from the originals on several occasions, completing broken figures and giving the faces a more stylized feel (Fig. 10). Both Cotman and Yarington therefore were producing images that appealed to a market interested in antiquarianism, deviating from the original brass to get the desired effect. Although Yarington uses etchings of local brasses, it seems that the figures were chosen for their aesthetic appeal, in order to give the windows a more generic medieval feel. This idea is supported by the fact that at least two versions of Ralph Shelton were present in the church, with that from the east window altered to include a helm. 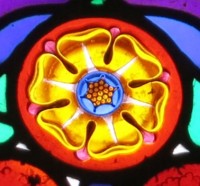 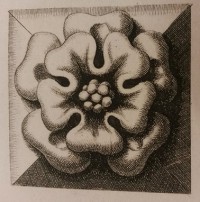 It is clear from the Cotman example that Yarington used etchings as a source from which to create a glazing style that would appeal to those interested in a historic aesthetic. In addition, the auction catalogue of Yarington’s estate, dated 17 March 1847, describes, amongst other items, a list of books that were kept in Yarington’s stained-glass studio.[14] Comparisons might drawn between the ornamental pieces seen in the east window and some of these books, for example Joseph Halfpenny’s 1795 Gothic Ornaments (Fig. 11).[15] Ornamental designs like those seen in the east window at Nowton were popular at this time, and a full examination of the list of books from Yarington’s studio could further highlight an important cross over between glazing and other decorative arts of the period.

As Gothic became the prominent aesthetic in nineteenth-century design, the bright colours and ornamental style of these amalgamations of Continental and coloured glass fell out of favour. The move away from this style continued throughout much of the twentieth century, meaning that very few schemes remain. The stained glass at Nowton is an important example of the use of Continental stained glass in Britain at this time.