Conservation of Stained-Glass Windows attributed to the Maestro di Figline in the Church of Santa Croce, Florence, Italy

The conservation of stained glass attributed to the Maestro di Figline in the magnificent Franciscan basilica of Santa Croce in Florence, possession of the Fondo Edifici di Culto del Ministero dell’Interno, is due to the care of the Opera di Santa Croce Onlus, which financed the project. The initiative achieved excellent results through the collaboration of an outstanding team: the conservation work was done by Americo Corallini and Valeria Bertuzzi of the Studio Fenice S.n.c., located in Bologna, while oversight for the project lay with Marco Pancani, in charge of the Opera’s technical matters, and Arch. Enzo Cancellieri, the project planner and director. Technical and scientific direction was provided by Dr Brunella Teodori (SSPSAE di FI-PO-PT e per il Polo Museale della Città di Firenze) and Arch. Lia Pescatori (SBAPSAE di FI-PO-PT), and laboratory analysis was conducted by Dr. Susanna Bracci (ICVBC-CNR di Firenze) and Dr. Marcello Picollo (IFAC-CNR di Firenze). In addition, Caterina Pirina and Piera Bassi of the Corpus Vitrearum Medii Aevi-Italia were consulted. The year-long project was carried out in 2010 2011. 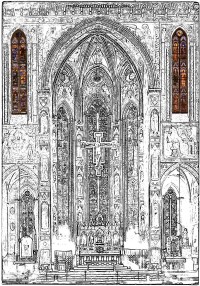 The initiative signals a benchmark for future projects as a result of the team’s close adherence to the most rigorous conservation principles. The decision to proceed with maximum caution, guarding against, above all, damage or alteration of the original glass painting   and eschewing, in particular, the application of additional glass paint on top of the original   was made with an eye to the future when innovations in the field may succeed in resolving technical problems for which no satisfactory solutions exist today. In fact, the Santa Croce windows present an exceedingly difficult situation: the extant, authentic glass paint is completely saturated in the degraded vestiges of a cold paint that was applied to the interior glass surfaces well over a century ago. Neverthless, the conservation effort has improved the windows’ visual aesthetic and has brought to light invaluable historical insights and new scientific data, the latter through CNR researchers Bracci and Picollo, whose findings include the identification of extremely rare fourteenth-century glasses composed of six layers. Particularly important is Corallini’s innovative installation, which preserves the original orientation of the panels while allowing their easy removal from the interior of the building without disturbing the exterior protective glazing.

The stained glass, comprised of two double lancet windows attributed to the so-called Maestro di Figline, still occupy their original positions above the transept chapels and flanking the high chapel (SII and NII, fig. 1). The south window, composed of three registers of Franciscan saints and popes, displays at its apex the coat of arms of the Bardi family, patron of the window and the chapel beneath (fig. 2). Window NII, devoted to the Geneaology of the Virgin, bears the arms of the Spinelli family (fig. 3). The windows, among the earliest in the church, date to between 1320 and 1330.

The windows’ past two restorations are documented: one by the glazier Ulisse de Matteis, around the end of the nineteenth and beginning of the twentieth century, which included releading the panels, and the other by the Studio Tolleri of Florence, carried out after World War II. However, to earlier restorations of unknown date can be attributed an ad hoc repair of gaps and the broad application, to the interior surfaces of the glass, of a substance whose intended purpose may have been to affix flaking vitreous paint or to act as a kind of cold paint that could homogenize the visual effect of the windows.

Condition of the Windows

The Fenice studio encountered a number of challenges, beginning with the removal of the glass panels from the site. They were extremely bowed, had been inserted directly into the stonework without frames, and were sealed around their perimeters with a cement that had become extemely hard and resistent. The cement encompassed the horizonal bars and even partially covered the leads and glass panes (fig. 4). 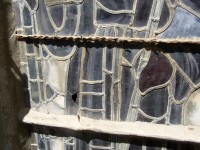 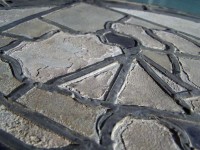 Fig. 5. The by-products of corrosion on the exterior surface of a panel. (Photo: copyright, Archivio dell’Opera di Santa Croce) 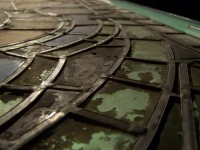 The glass exhibited the usual corrosion patterns, with diffuse micro-craters on glass that is still relatively healthy and transparent, and excessive corrosion on glass manifesting an advanced state of alteration and a marked opacity (fig. 5). The interior surfaces of the panels exhibited the remains of the cold paint mentioned above, a black ‘film’ that was intact in some places and detached in others, partly as the result of repeated abrasion at the hands of successive restorers (fig. 6). This residue tends to follow closely the original glass paint on the figures, perhaps because the cold paint has bonded with the underlying authentic glass paint or possibly because various restorers have attempted to scrape away the stubborn material in imitation of the figural design (fig. 7). This repainting, which preceeded De Matteis’s restoration, was probably done in situ, considering the fact that spider webs were incorporated. Additionally, the Santa Croce windows had more than 120 instances of plating, intended either to stabilize weak pieces or tone down excessive brightness due to grisaille loss (fig. 8), and various panes were fractured or broken as a result of vandalism. 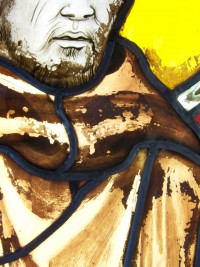 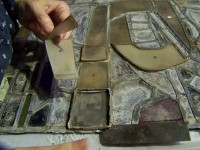 A policy for dealing with the ninteenth-century cold paint became the subject of focused study, laboratory investigation, and extensive team discussion. The practice of covering an entire window with cold paint, customary in old Italian restorations, constitutes today a tremendous problem since over time the paint has darkened, obscuring the original glass paint, and has transformed into a material that is extremely difficult to remove. Where the cold paint has bonded to authentic glass paint the process of removing the degraded cold paint could result in the loss of original paint. Naturally, the window’s conservation influenced decisons regarding the cold paint. It was removed partially, and where only no original glass paint lay underneath. This was done according to a precise protocol aimed at avoiding disharmony and chromatic imbalances between the treated and untreated areas (fig. 9a-b). The plating was dismantled because of discoloration and the seepage of water and dirt between the glasses (fig. 10). New plates were installed, the uncoloured glass toned down with a wash of cold paint. Cold paint was also applied selectively to the exterior of some glass pieces, but to none with original grisaille. Fractured and broken glass was reconstructed and glued. Some mending leads were eliminated, and the breaks glued with Araldite 2020 (fig. 9a-b). 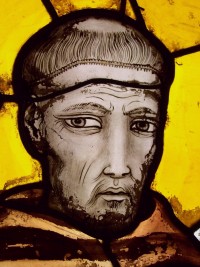 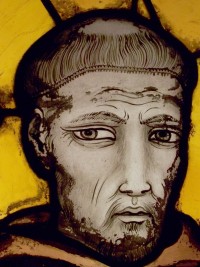 Fig. 9b. Head of Saint Francis of Assisi after conservation. The nineteenth-century cold paint was not removed in areas where it covered the original glass paint. (Photo: copyright, Archivio dell’Opera di Santa Croce) 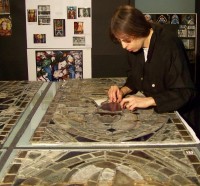 For many years, the south window was associated with the painter Giotto. The art historian Giuseppe Marchini held this view until 1983, when he assigned it instead to the so-called Maestro di Figline   to whom have been referred some of the windows in the lower church of the basilica of Assisi. The attribution is still generally accepted today, while the north window is thought to be partly the work of the master’s assistants. The conservation of the Santa Croce windows has brought to light the Maestro di Figline’s approach to painting on glass. The figures were painted with a series of fine brushstrokes in a technique more usual for the fresco painter than the glass-painter (figs 9b, 11). To reinforce the painting, the master applied additional glass paint on the exterior surface (fig. 12). Over time, this delicate glass-painting has become barely visible on the more stable glasses, while it has been nearly lost on the corroded ones. 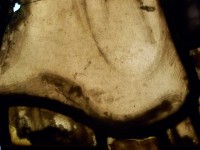 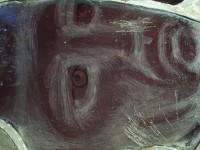 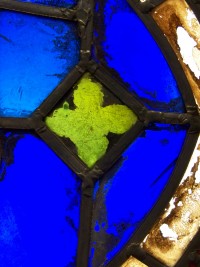 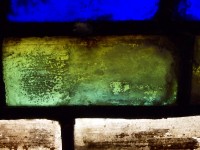 Fig. 13c. Microsections of green glass and a table showing the thicknesses of the layers (Table: copyright, Bracci – ICVBC-CNR Firenze.)

Significant information about the modus operandi of the glazing workshop has surfaced over the course of the conservation. For example, on the left sides of the architectural canopies some of the uncolored (white) glass pieces painted with foliate motifs were leaded in with their painted surface facing the exterior. This confirms the hypothesis that glass workshops customarily treated the decorative components as a serial production. A supply of tesseras, already painted and fired, were likely on hand during the leading process. In this case, it was more expedient to adapt pre-prepared pieces by flipping them than to specially paint and fire a few pieces of decoration oriented in the appropriate direction. Some tesseras have indications in grisaille—letters, numbers, or other marks—used for correctly leading up the pieces. Additionally, an unusual light green glass was identified, first with non-invasive fiber optic reflectance spectroscopy and then confirmed with sections of microsamples. This authentic glass is composed of six layers of alternating yellow and blue glasses (fig. 13 a-c). The glass has analogies with glasses found at Assisi.

Improvement of the Installation System

Changes made to the installation involved turning the T-bar toward the interior. The stained-glass panels, framed with stainless steel and reinserted into the already-existing grooves in the stonework, can now be removed from the interior of the building without disturbing the external protective glazing (fig. 14). The new isothermal protective glazing, framed with stainless steel, has a ventilated interspace of around three centimeters (fig. 15). 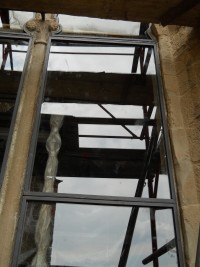 The photographs accompanying this article are the property and copyright of the Archivio dell’Opera di Santa Croce and may not be copied or reproduced in any form. Sincere thanks are extended to Dr Giuseppe De Micheli and Dr Claudia Timossi, of the Opera di Santa Croce; Susanna Bracci, of the Institute for the Conservation and Promotion of Cultural Heritage-CNR; Americo Corallini and Valeria Bertuzzi, of the Studio Fenice, Bologna; Caterina Pirina and Piera Bassi, of the Corpus Vitrearum Medii Aevi-Italia; and, for her assistance, Dilyana Damyanova Valeva, of the Studio Fenice.